Desire, transgression, betrayal. Porphyria, the new play by  C. J. Wilmann, billed as a dark comedy and picked as one of two Edinburgh Fringe entries by Nottingham Uni students, examines what happens when one man’s perfect woman steps out of his dreams and into his marriage.

Reginald Blake’s (Nick Jeffrey) marriage is on the rocks. He doesn’t spend enough time with his wife (Liz Stevens), and when he does it degenerates into bickering and bitterness. Their marriage, which is now nothing more than  arguments about Reginald putting the rubbish into the wrong bin and what to have for dinner, is failing; the spark has gone. However, Reginald has an escape. When the sun has vacated this world and the earth is quilted in darkness, Reginald flees to his somnolent retreat where, deep in sleep, he dreams of a woman (Genevieve Rose Cunnell); a woman who is his every desire. So far, so standard marriage. However, when this perfect woman seemingly vacates his dreams and turns up at his house as the new au pair, Reginald is forced to choose between staying with the bitchy, emotionally cold mother of his child, or to chase the dream woman. Reginald chooses the latter. The new relationship however does not offer Reginald any reprieve from inner torment and, as the boundary between fantasy and reality begins to blur, Reginald’s ego starts to shatter and his mind is plunged into darkness.

Porphyria is an examination and investigation into what happens when someone chooses to chase seemingly perfect fantasy at the expense of reality. It is billed as a dark comedy but is actually more of a psychological drama, as the comedic elements of the play quickly give way to darker ruminations. This marriage of actually quite light and broad comedy and a dramatic plot of mental illness is an interesting choice; one that has both good and bad results. The bad result is that the comedy feels out of place. The play is only fourty five minutes long, a running time essentially forced by the Fringe’s strict ‘on-off’ time limits, and as a result of this the audience is asked to emotionally modulate from light comedy to serious drama very quickly. It makes the viewer feel uneasy, as one gets the impression the play doesn’t totally know what it is trying to achieve. The good, however, is that this uneasiness perfectly translates into the second half of the play, where this uneasiness is structural to the narrative itself, as the audience is presented with increasingly abstract scenes portraying Reginald’s intensely fractured mind. 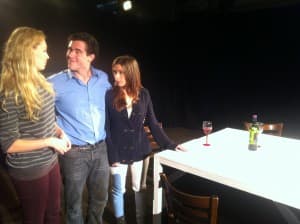 Nick Jeffrey puts in a solid performance as Reginald. Comedically he is tight, but it is his dramatic performance in the second half that really shines; for the most part perceptively capturing the essence of a man whose mind is leaving him. There are slight slippages in his performance, such as the choice to at times express Reg’s increasing mental frailty by pulling the same face that Christian Slater did when Austin Powers hypnotised him. However, overall he brings a real warmth to the character; a warmth that the entire play hinges on. Liz Stevens is equally adept as the wife, but as the play is essentially an essay into one man’s mental illness, the characters around him are always slightly more hollow than he is, leaving the wife as a somewhat underdeveloped character. Genevieve Cunnell, who plays the ‘dream woman’, is however, engaging. During a scene in which she has to display opposing emotions at a seconds notice she is brilliant, showcasing a technical ability that is not often seen. She also brings a reserved mystery to the part of the dream woman which has the effect of using the underdeveloped nature of the character as an advantage, intelligently creating a sense of intrigue towards this fantasy girl

This intelligence is carried over to the producer/directors (Elin Stenner-Matthews, Matt Wilks and Tom Barnes), who have managed to create an engaging piece of theatre despite serious restraints imposed by the Fringe. There is no backdrop as such however, this positively functions as to allow the audience to invest more deeply in the psychological core of the play. What props are used are on wheels. However, once again, the directors have used this limitation to their advantage, as the fluid assembling and dissembling of the props on stage (a table turning into a bed, for example) perceptively mirror Reginald’s psyche. The blurring of one scene into another leaves the audience unsure as to exactly what they are viewing. Lighting is also used astutely, as scenes involving a television purely created out of lighting effects has the result of extending the parameters of the stage and adding much needed space to the performance.

Overall Porphyria is a success. As a narrative it is intelligent, almost goading the audience to enter into Reg’s psychological hinterland; that dark territory between reality and dream. As a script it falls down comedically however, this is merely a distraction from the rest of the play which at times delivers brilliant and technically confident dialogue. As a production it is well-crafted and subtly acted. However, more than anything, it is an interesting foray into the nature of dreams, and what can become of people who enter into them. Reginald’s dreams end up costing more than either the dream woman or his wife could realise but, as Deleuze once said, ‘If you’re trapped in the dream of the other, you’re fucked’.

Impact’s Day At The Leveson Inquiry