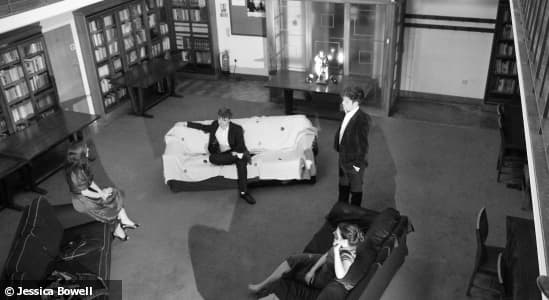 No Exit: A dark and amusing play with innovative staging in which a trio of diverse characters increasingly drive each other mad.

The audience sit jury-like round the balcony of a library, gazing down as one by one, three seemingly unconnected people are led into the living room to which they’ve been condemned to live in for All Eternity.

The play begins with James Pardon entertainingly portraying the long suffering Valet, who must continually ferry protesting ‘guests’ to the afterlife, showing Garcin to his final resting place. Cracks in Garcin’s (Lyle Fulton) initially calm façade immediately show with his annoyance in realising he now no longer has a need for a toothbrush and that the Valet has no eyelids for sleeping (though even without eyelids James is a most suave devil-figure!) 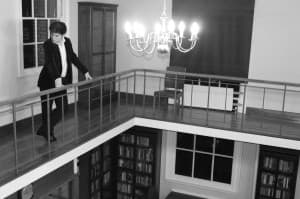 With the entrance of high society woman Estelle (Harriet Davis) and manipulative lesbian Inez (Page Phillips-Harrington) the three settle down to try and come to terms with the significant lack of fire, brimstone and thumbscrews.  It is quickly apparent that it is their own sins, revealed in what consolation they seek in the other characters, which will torment the trio.

Harrington’s Inez was confident and calm in her cynicism and relentlessness in attempts to seduce Estelle.  The audience enjoyed her probing of Garcin that causes him to finally admit his sins – a confession in which Fulton made his character sufficiently unpalatable.  His increasing agitation at being locked in a room with the two women contrasted with Davis’ amusing self-preoccupation.  Her graceful demeanour complimented her depiction of self-concerned aristocrat in need of validation from men, namely Garcin.  Despite a few line fumbles expected in the anticipation of opening night, the cast firmly established the tensions that ran throughout the rest of the one act play. 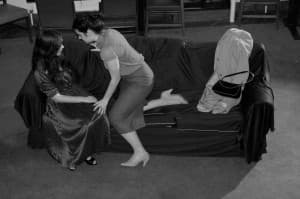 Directors Alice Child and Lauren Wilson chose well the location of Lincoln Library, which gave Hell a suitably post war feeling, and the unusual viewing angle coupled with lighting made for some nice shadowy-enhanced features of the damned.  There was only a slight problem with the visibility of the actors’ faces, though that probably varied from view to view depending on the seat in the round.  The actors address the majority of their dialogue to each other unless they’re commentating on the goings-on of ‘up above’, so for those in the corner of the room, much of the impressions of the characters came from hearing the delivery of the lines rather than, as much as we would have liked, seeing them.

Neck-craning aside, a neatly produced production of Sartre’s classic with a fine cast that will leave you wondering who you would like to be in Hell with!

All images by Jessica Bowell