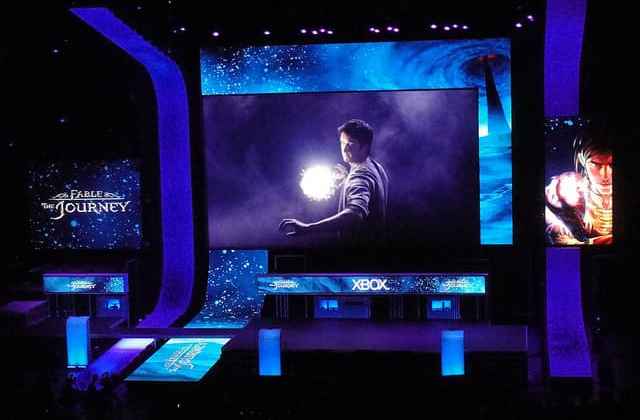 The Fable series is one of my all time favourites. What’s not to like? A curious combination of magic, adventure and a ridiculous sense of humour have brought me back to the series time and time again. However there was one game in the series I thought I would never play; ‘Fable: The Journey.’

After enjoying the originals so much, the fact that ‘The Journey’ requires Xbox’s Kinect to play, worried me. The few times I have used Kinect has only enforced my view that most of the games available for it are more orientated towards arcade-and family gaming. However out of the blue I acquired Kinect at Christmas, and it was only a couple of weeks before I had Fable the Journey on the screen…

The game is a break from its predecessors in that it doesn’t follow the tale of one of the hero bloodline; it instead focuses on an ordinary gypsy boy called Gabriel. Set 50 years after Fable III, Albion has prospered in peace; however, trouble is never far away. As you pass along the coast a strange storm surrounds The Spire far out at sea. The Spire is the focus point of all magic and whoever commands it can bend reality to their will. The story continues to reveal the bloodline which has lasted for 3600 years has failed, leaving Albion without Heroes. As the land slowly falls into darkness it is up to Gabriel and the blind seeress, Theresa, to stop Albion’s greatest enemy from reclaiming its long lost throne, and in the process forge a new Hero to defend the land.

The game is a break from its predecessors in that it doesn’t follow the tale of one of the hero bloodline; it instead focuses on an ordinary gypsy boy called Gabriel.

Gameplay is surprisingly fun, but a downside is having pretty tired arms if you play for too long. A large portion of the game consists of steering your horse and caravan down the winding roads of Albion; Kinect enables you to control the movement just like using the reigns of a real horse. It’s not all plain sailing though; whilst riding you often come under attack from enemies; on some occasions you have to ride through them, avoiding their attacks, or if the threat is more serious Gabriel will drop the reigns and you can cast spells on the move.

There is no melee or ranged weaponry in this game, only a selection of spells which you can cast through gauntlets you acquire. Your left arm casts a spell that latches on to the nearest enemy or object, allowing you to pick it up and throw it. In the case of Hollow Men, which are animate skeletons, you are even able to dismantle them piece by piece. Bolt is your main offensive spell, which is cast with the right hand, but as the game progresses you’ll come across other spells which have greater power. You can also upgrade your magic in order to gain additional effects. I’d suggest sticking to the default spell casting as it works really well; the specialised settings it calibrated for me were useless.

The enemies include the gremlin-like Hobbe, Hollow men and vicious Balverines. Giant wasps also return, alongside new creatures like the draconian Harbingers and Trolls. The Hobbes have been buffed as they are a lot more of a threat; not only have they overrun many towns, they can now ride giant cattle into battle!

I’d suggest sticking to the default spell casting as it works really well; the specialised settings it calibrated for me were useless.

Moving around the battlefield is fairly limited, you can side step by leaning but you can’t move forwards until all your enemies are dead; walking is controlled by the game.

Fable games haven’t had a good track record for their endings; Fable 2 arguably had the most disappointing ending of any game I’ve played. However this one is very different; there isn’t much to do at the end but it’s certainly dramatic and involves one very big bang!

Kinect made this game incredibly enjoyable, it’s unlike any other game I have played and is definitely worth trying if you have Kinect. The battles are well thought out, the spells are easy to cast and it fills in much of the Fable story that you didn’t already know. If this is the last Fable like some people say then it is truly a fitting end to a very enjoyable series.

Just remember, ‘Without sacrifice there can be no Victory.’

Who Listens to Bastille? These Guys, Apparently

Living Wage: Is Ed Miliband Jumping On The Populist Bandwagon?