Who Listens to Bastille? These Guys, Apparently

Impact braved the windy January climes to speak to the devoted (and apathetic) fans queuing to watch indie rockers Bastille perform a free set in Mooch. We asked the questions that matter: are they the future of music? How has Made in Chelsea affected their careers? Why do they sound like To Kill A King?

Do you think Bastille are the future of music?

I think there’s a big sound. There’s a lot of new, up and coming bands at the moment. For example, there’s a new band called To Kill A King, they’re supporting Bastille in March.

Aren’t they exactly the same?

They’re very similar. Radio has backed Bastille, and I think that’s a major influence. They’re doing an acoustic set today. And their acoustic sound is actually a lot different to how the album actually sounds, which is quite similar to To Kill A King.

Do you think appearing on Made in Chelsea has affected their credibility a bit?

Yeah, probably. But the music is much more open now, it’s on national television.

What sort of bands do you think have influenced Bastille?

Well, they’re doing an acoustic set today so you’ve got Dylan, Van Morrison, stuff like that. But they’ve also got that technical sound with that Bloc Party influence.

What are you going to do if you don’t get in?

Go back to work! There’s obviously 500 people allowed in but I’ll stay around a little longer. 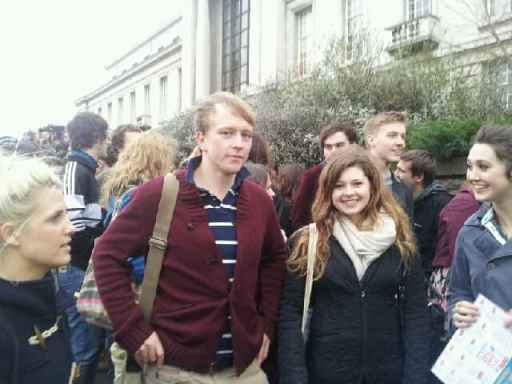 Interview #2 “You should ask the man down there…”

Are you guys fans?

Do you think Bastille are the future of music?

[Long pause] How do you define the future of music?

Will they be headlining Glastonbury in 10 years?

Probably not. They’re not quite mainstream enough.

Do you think appearing on Made in Chelsea affected their credibility?

I think it may have helped them. It depends.

What artists do you think have influenced Bastille?

[Pause] You should ask that man down there. He really knows a lot about them.

If you don’t get in what are you going to do?

We’re going to get pick and mix and eat it in Portland. 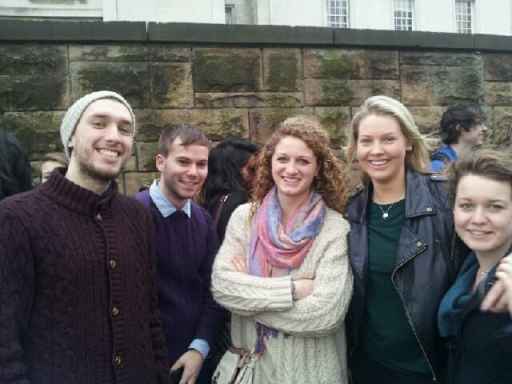 Are Bastille the future of music?

How far do you see them going?

Far. Look how many people showed up

To a free gig. Do you think appearing on Made in Chelsea damaged their reputation?

Not remotely. I think it was a great idea! But I’m applying to be on Oh So Surrey, so yeah.

If you guys don’t get in, what are you going to do instead?

Cry! Just press our ears up against the wall and hope for the best.

Oh, we don’t really know many things about the band. You might want to talk to someone who is more in the know. We’re here because this is a free gig. They sound really good though.

But you heard of them before today?

Is anyone here a fan?

Well, I listened to some of them last night.

Are Bastille the future of music?

Really? You’re asking me that? They’re a pop band at the end of the day.

Do you think appearing on Made in Chelsea damaged their reputation a little bit?

I didn’t know they did that. But I’m slightly disappointed.

What are you guys going to do if you don’t get in?

We are going to get in.

But what if you don’t?

Would you guys like your photo taken for Impact?

Interview #5 “Their Dancing on Ice advert was worse…”

Are you guys big fans of Bastille then?

Me and Fiona are.

Are you seeing them live?

Yeah, we are going to see them in March at Rock City.

Do you think they are the future of modern music?

How far do you see them going as a band?

I’d say pretty far. Radio 1 like them a lot. I think they could go a lot further.

Did appearing on Made in Chelsea damage their reputation a bit?

I would say so. I think the Dancing on Ice advert was worse!

What do you think of middle of the road indie rock?

What will you guys do if you don’t get in?

Students storm the Bastille! Who do you think influence their sound?

You don’t have to answer.