Written, directed and produced by Michael Mann, and very loosely based on the F. Paul Wilson novel of the same name, The Keep was both a commercial and critical flop, but that didn’t stop Nottingham’s own Kino Klubb from hosting a screening of it at Broadway cinema last night on a beautiful 35 millimetre print from the BFI.

The Keep begins with several armoured Nazi trucks travelling down a long, winding road through the Carpathian Alps in Romania. They arrive at a small village and disembark, and as the soldiers begin to walk the inhabitants run into their houses and slam the windows and Tangerine Dream starts to play. Something weird is afoot.

And then they reach The Keep, a great fortress of black stone stretching from one end of the screen to the other, and the dark entrance looks cold. Fearing nothing, the Nazis walk over the drawbridge and into the darkness and are immediately greeted by the janitor, a bearded man in a golden robe who gives them no words of welcome, but warns them against touching any of the 108 nickel crosses that adorn the walls of The Keep. As they walk its many passages, the Nazi captain remarks, “These walls are built backwards; almost as if it were designed not to keep something out, but to keep something in!’. Definitely weird.

Of the more well-known actors to star in The Keep, Sir Ian McKellen is certainly the most bizarre, not least because we’re so used to seeing him as Magneto or Gandalf. He plays Dr Cuza, a Romanian historian with an American accent brought to The Keep against his will to decipher a message written on the wall in a 500-year-old dead language. Speaking about his fond memories of filming in a 2004 interview, he said he thought he had been ‘ill-cast’, going on to reveal that he had narrowly avoided a mental breakdown and had to be flown back to London from the filming location in a disused quarry in Wales. His character has a rare debilitating disease that makes him appear thirty years older, so that most of the time he travels about in a wheelchair looking sullen and uncomfortable.

Mocking aside, however, The Keep is actually a very enjoyable film, and this is mostly, but not all, due to Tangerine Dream’s soundtrack. Nazis run in slow motion through the bright mist, and the eerie synth begins to play like a distorted, less uplifting version of Chariots of Fire; these are the kind of moments that give the film its inexplicable power. The symbol of the nickel cross present throughout the film combined with the somehow-beguiling special effects makes The Keep look eerily attractive, giving it an 80s charm similar to Back to the Future or The Lost Boys. It’s easy to see why it has such a cult following. The atmosphere is just brilliantly constructed – it’s very Lovecraftian and surreal, so much so that even if the plot is at times incomprehensible, it doesn’t really matter.

None of it matters: it’s just a lot of fun. It’s certainly not perfect, and not even that well-acted, but nowhere else can you get the simple joy of watching Nazis absorb mist through their eyes and then explode. Sadly The Keep has never been officially released on DVD or Blu-Ray in any country, so it may be hard to get hold of, but if ever you get a chance, prepare to face the evil that drives people out in the middle of a rainy night. 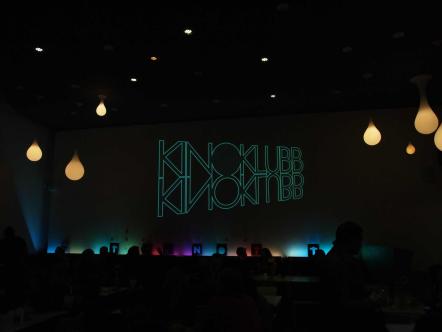 Naturally, The Keep wasn’t the only thing Kino Klubb had scheduled for the night’s proceedings. Afterwards in Broadway’s Cinébar, they hosted their very own Power Kraut Disko, kitting the room out with a plethora of flashing lights as well as the iconic silver crosses from the film itself, and then playing an eclectic selection of the most ausgezeichnet Krautrock das Mutterland has to offer.

This was Kino Klubb’s biggest selling event to date; a testament to the great and unique work they do, as well as their passion for cult cinema. But what’s next, you ask? In March, they will once again be teaming up with Kneel Before Zod and the minds behind Mayhem Film Festival for a free screening of Paul Verhoeven’s Robocop in the Cinébar. This will mark the beginning of a season of collaborations under the moniker of Cinema Diabolique, but don’t expect them to give anything else way just yet!