In a brilliant twist of irony, Tom Ford has become the ultimate victim of his own success. After trading in the typical catwalk format back in 2004 for invitation-only presentations in an effort to preserve the anticipatory thrill at the unveiling of the collections, his success has surpassed any benefits of secrecy. With over a  100 stores finalised worldwide by 2014, his efforts to make the industry wait for his designs seems counter-productive. And so Tom Ford returned to the runway, in an astronomical explosion of colour, texture and pattern and with more energy in his designs than ever demonstrated before.  Ford justified the colourful confusion in the reflection of the city. The mixing trends, “it’s what London is about, it’s an international city,”. And what followed was definitely a melting pot of international inspiration.

In the spirit of embracing old traditions, Ford took some of the most popular trends in the past few seasons and created an assault on the visual senses in an impossibly diverse collection. Native American Aztec and Western designs, both optical and traditional covered asymmetrically-cut dresses, knee-high boots, sculpted lapels and a variation of the poncho. Edges and hems were frayed, torn and finished with a thick woollen fringe but the variation of colour was nowhere to be found, replaced with a interchanging pattern of black and white, in a confusing modification of this season’s love for monochrome.  In turn, the Western cowboy leather jackets, dressed and fringes were the perfect contrast; black, shiny and heavy with the weight of the quality of the leather. 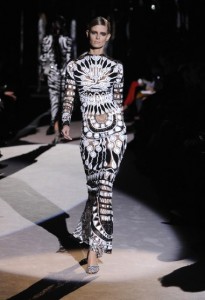 The ‘”very American influence” also cited the use of Pop Art. Beaded ‘explosion’ shapes of hot pink, green, yellow, orange and white were layered up and reached across floor length jersey and woollen dresses, neat pencil skirts and slouchy baseball jackets – often worn together for the contrasting silhouette – and a slinky black dress with a split cape. In two other ensembles, trousers were covered entirely in the pop-part pattern in neon shades of green, yellow, pink, white and orange and then in the previously seen monochrome. 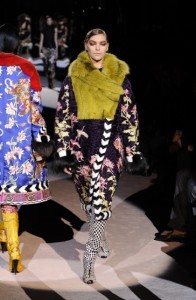 For added mystery and intimidation, gothic opulence returned in its sheer and lacy glory. Dresses, floor length and as slinky as they come, were dark and textured, made entirely out of tulle and crocheting, finished with lavish and detailed beading work. The darker pieces were a welcomed sight among all the colour and pattern, used as a foundation for the layering. The same beaded tulle was also on inserted slits of skirts and appropriately gothic blouses, with elongated, cuffed sleeves and scooped necklines. 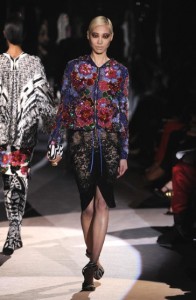 Two final details that took to the runway, often hand in hand, were the clashing colours of floral embroidery and animal print. Ford told writers “I’m really in the mood for colour so that at times it was almost garish”, bold shades of red, blue, purple and green embroidered into cartoon-style flowers on the same baseball jackets and skirts, complimented with silk appliqué in the same shapes.  In equal density was fur, dyed to saturated extremes in bright pink, lime green, white and blood red. Whilst Ford is never a man to do things by half, the visual assault that these two trends offered is something memorable for more than just the style, but the daring cuts and pairings of the brightly coloured clothes, refusing to abide by any previously conceived limits. 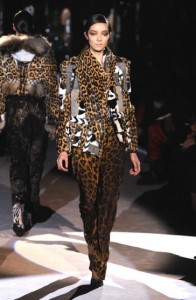 So what to make of this dominating return? Although the clothes may not appeal to some, the craftsmanship and the dedication to quality are the two attributes that definitely shine through – and that are ultimately what Ford stands for. Commenting on his return, he noted how he’d “forgotten how much fun it is to do a show” but naturally like any creative force, suffered from nerves. Not that it mattered of course, as he blew us all away, like he has every other time.

Cover Girl: The Power in the Publications