Voluntourism: The Business of Orphans

As the new term begins, you might be thinking about how you’re going to spend your impending weeks of freedom. Without a job or internship, those plans might be centred around travelling- maybe a holiday with friends, or an aid project abroad. Something reminiscent of those sweltering gap year days becomes all the more appealing when you sit in your student house, watching icicles form on the inside of your windows…

However, the rapid growth of the ‘voluntourist’ market has been noticed by entrepreneurs abroad. Students in particular are increasingly falling into the trap of ‘orphanage tourism’. This idea encompasses schemes that deliberately maintain poor living conditions for children to secure funds from tourists- some even go so far as to take children from underprivileged homes to create situations that Westerners can pay to visit.

Cambodia is one such example. Torn apart by civil war in the 1970s, and again in the 1990s, it has become a hot bed of ‘voluntourism’- a site for people to visit and try and make up for the severe shortage of development funding by giving their time to orphanages and schools. However, reporters have found that not only are people exploiting the money and labour of people travelling to help abroad, but that Cambodian parents are giving their children to exploitative centres promising a better standard of upbringing and funds from this industry. It’s been estimated by Al Jazeera that over 70 per cent of the estimated 10,000 ‘orphans’ have at least one living parent. Far outstripping demand, the number of orphanages has doubled in the last decade alone.

The ChildSafe Network is a charity who have seen examples of this problem worldwide. “An orphanage is a child’s home, and they have the right to privacy in this space,” the charity reminds us. “Most people would never consider going to an orphanage, shelter or residential home in their own countries. They are not zoos.” And whilst the ready retort may be that orphanages and child-centres in developed countries don’t suffer from the same issues of funding as those in developing countries, the issue still stands that streams of tourists dropping in and out of these children’s lives really can be destructive. The funding tourists provide is not sustainable, and by “visiting orphanages and making a donation, you may be fuelling a system that exploits children” rather than one that helps them in the long run. 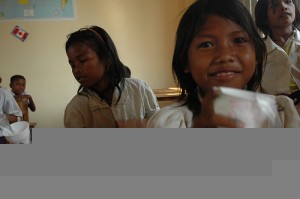 It can also be seen through national tour services how orphanage tourism has become commonplace. Hidden Cambodia, an adventure tour service, agreed that “large tour companies, cruise Siem Reap for one day, [and] will do a visit to  a children’s centre or orphanage on the second day”, despite movements on Facebook trying to “educate people that they do not need to visit an orphanage to help”.

However, this issue is one that is just too big for social media. Information is not reaching students before they commit to big tour-operator programmes and thus they may be unintentionally supporting an industry that they believe their money is helping to stop. “There are a number of questionable orphanages, we often hear of them … attract[ing] tourists to their place for performing shows late night and asking guests to attend and make donations,” Hidden Cambodia warned . “There was one recently closed down here where a foreigner had set it up, and there was some abuse. Another one again when the American founder fled when [there] was found  out … to have been some wrong doing [sic].”

The negative impact of such profit-run orphanages affects those who do try to help Cambodia’s weak social infrastructure. However, it is hard to tell from the other side of the world, behind a computer screen, what the centre you end up in will truly value. Some argue that even government accredited orphanages (with their mandatory inspections) don’t always tell the full story, either. A Swiss expat, Sara Wallimann, opened a training school in Siem Reap after finding out that few places had any support for children after they left the orphanage. In her experience, “it doesn’t matter if the orphanage is a registered NGO or not. The government doesn’t check them anyway and we know of NGO registered orphanages that are not trustworthy, who have kids that are not complete orphans and who keep the orphanage in poor conditions.” She warned, “what’s really important is that the orphanage has a strict child protection policy. That’s when you know it’s a reliable place.” 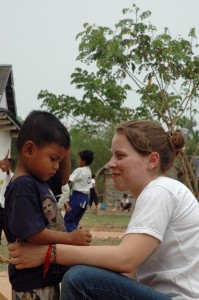 Not all of these centres are run by Machiavellian money-grabbers, but also by charities and trusts who do the best work they can with the donations they can raise. Golden Futures, a student-run charity initiated by a University of Nottingham student, works to provide young adults who have grown up in orphanages in Cambodia with interest free loans for tuition fees, vocational training, or towards start-up costs for small businesses. This means a step towards breaking the cycle of intergenerational poverty and dependency on aid.

Katherine Stapleton, a member of Golden Futures, explains: ‘Although we know that there is little evidence that microfinance [through business and university loans] does reduce poverty, we believe that the work we do is helping, albeit on a small scale, a few individuals to improve their prospects. With our support [students] have gone on to study medicine or law or economics, giving them a completely different lifestyle to their families who are maybe subsistence farmers in the countryside.”

Rather than simply losing hope in the companies who provide tours and student trips, it is important to make sure that the people who you are giving your money and time to are using it for its proper cause.

“It’s necessary to find genuinely good charities and I would advise people to find smaller charities if they don’t want to be paying a lot to those doing admin,” Stapleton agrees. Yet, she blames the culture of ‘gap year’ group travel for the reasons why people aren’t always interested in thoroughly researching their destinations. “Some people aren’t comfortable traveling alone and want everything arranged for them, which is probably why those organisations exist. A certain amount of cynicism is necessary, but remember that a lot of charities and volunteers are doing excellent work!”

Student vs. Food at The Rose and Crown, Lenton