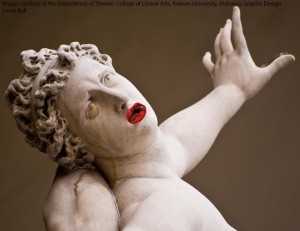 Lysistrata: A bit of a mouthful to say, yet it epitomises that Greek spirit perfectly. Truthfully I didn’t know what to expect; I had no idea what was in store. Had I eagerly volunteered my Tuesday evening only to be splendidly bored dry by a load of Ancient Greek history? Don’t get me wrong, I love drama- I’m just not a keen historian. But, I needn’t have worried at all, for my fleeting misconceptions could not have been more wrong.

Lysistrata is the first full collaborative production between Nottingham New Theatre and Nottingham University’s very own Public Arts Centre- Lakeside.  Essentially it is a play written by the Ancient Greek poet Aristophanes in 411, who drew upon the 27 year conflict between Athens and Sparta, which he witnessed during his lifetime, as the inspiration for this play.

As I walked into Lakeside’s theatre the first thing that drew my attention was the amazing and authentic set layout; made to replicate a classroom, what with students sitting at singular tables facing their teacher. It was a context  that I, and many within the audience too I am sure, had no trouble relating to. There was a definite tang of  excitement and expectancy in the air: I took to my seat absorbing this electric atmosphere. On stage was a mere cast of 11, whose skills and talent inspired awe and a great deal of hysterical laughter and enjoyment within the audience. The characters’ names were as long and authentic as the play’s title, with Emma McDonald as Lysistrata, Caroline McCall as the tyrannical Teacher and Philip Damms as Kinesias to name but a few.

Worthy of particular note was Alix Hattenstone’s performance of the overly comic and sex-passionate character of Calonice. A character driven by sex and inner desire, she acts as a foil for the male characters and was successful in provoking manic laughter from the audience. I really loved everyone’s performances, and thought they all had achieved an admirable and believable feat; but for me she stood out, what with her crazy outlook on events and ability to charge the situations unfolding on stage with comical awkwardness!

From the moment Lysistrata opened with its musical number to the final bows of the cast, it did not fail to induce continuous  laughter. I thoroughly enjoyed every second of Lysistrata; congratulations to Nottingham University’s Arts and Drama enterprises for collaborating to produce an extremely entertaining and humorous show! All that is left to remember is that renouncing sex to establish peace can have a destructive effect upon both males and females, it has the ability to sway decisions, end conflict, and induce crazy amounts of pain for the ‘dominant’ male race. Therefore the moral of the story is…make peace and have sex!

Public performances of Lysistrata run at Lakeside Arts Centre on Friday 26th  and Saturday 27th April (matinee and evening performances on the Saturday.) For ticket information go to: https://www.facebook.com/events/513929165335656/?fref=ts

How Brit is your Dish?

A Day with Dior