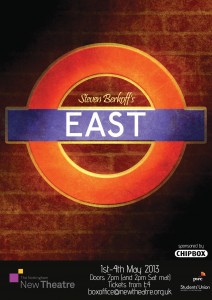 Stephen Berkoff’s East deals with growing up and the rites of passage in London’s East End. Set in 1975, this verse play captures the essence of family relations in a beguiling manner.

The cast itself consists of Mike (James Bentley) and Les (James Pardon), two East End badboys with a lust for causing trouble, Sylv (Amelia Gann), a flawless object of affection for the male characters, Dad (Ben Williamson), the insolent husband of Doris or Mum (Ben Hollands), an unloved ageing mother who certainly gained the audience’s sympathy. Not forgetting producer Alice Ratcliffe, who doubled as the pianist for the piece with impeccable timing and musical genius.

Director Andy Routledge has really played around with his actors in this masterpiece and seems to grasp the concept of the play fantastically. His direction, along with the actors’ incentive, added energy to theatre that I have never witnessed before.

Two extremely vivid monologues that stood out for me involve Mike (Bentley) with firstly a bold description of his own penis, followed later by a captivating dialogue about female genitalia whereby he portrays himself climbing inside a vagina. Bentley and Pardon have a great stage presence together and Amelia’s portrayal of Sylv’s feistiness of character never falters. The husband and wife ensemble of the two Ben’s is shockingly tangible, particularly during the bed scene.

The use of strobe lighting to produce a seven minute mime piece by the actors really sets the piece alive, not to mention Bentley’s use of Pardon as a human Harley-Davidson; I commend him for the strength in his legs! I also enjoyed the non-verbal recreations of everyday scenes including trips to the cinema and the seaside. The costumes were fantastic and helped to gain essence of the characters, particularly that of Mum.

If you want a storytelling experience then this production is not for you. But if you want a rollercoaster ride with twists, turns and loop-the-loops then East will satisfy your every need.

East runs at the Nottingham New Theatre until Saturday 4th May. For tickets email boxoffice@newtheatre.org.uk

Are Nottingham’s bouncers above the law?

Internet Nostalgia- Back to the Glory Days?