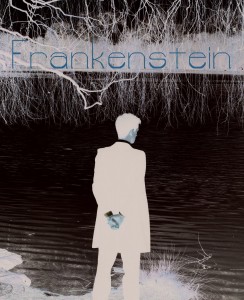 Jake Leonard’s Frankenstein takes on the challenge of representing Mary Shelley’s classic gothic novel for the stage. His adaptation develops a life of its own through dynamic choral elements and shifting monologues. Through the creation of Victor Frankenstein’s monster, the play explores how boundaries are blurred between the fundamental notions of love, life and death.

The dark tale began with the unlit stage hiding a solitary figure crouching before a lake, interestingly assembled with a kind of tub and bin bag lining. Darkness, candles and flashing lights were employed throughout the play which, combined with the haunting harmonies and eerie sounds produced by the chorus, created a tense and mysterious ambiance.

Empathy and emotion were evoked through the suffering and turmoil of the characters. However, some of the main sections of speech were unfortunately lost due to a lack of projection which made following some of the rapid plot shifts difficult.

Victor Frankenstein was portrayed as both fragile and self-absorbed by Dan O’Connor, who also committed to numerous extremely convincing fits. A delicate chemistry was also created between him and Elizabeth Lavenza, played by Jessica Lundholm, who lived up to her enchanting description.

Victor’s creation resembled a Doctor Who-esque monster whose movement was carefully executed by James Gregory.  The plot did miss out details of the reasoning behind Victor’s creation, choosing to focus more on the monster’s mission to fill the absence of love in his life.

The ending held an interesting alternative to the one presented in the original novel, and I appreciated the use of the lake which I felt could have been used even more in order to exploit its full symbolic potential.

The production would have benefited from including more conversational scenes, such as Elizabeth and Victor’s emotionally charged argument after their marriage, to avoid the repetition of the use of monologues and scenes of silence where the characters remained mainly static. Overall, with more of a focus on fewer artistic ingredients, greater attention to detail could have been achieved and the initial high level of energy and intensity could have been maintained throughout the performance.

A very ambitious first attempt at re-styling Shelley’s novel which I think will improve throughout its run. As indicated by the director’s invite to critique the play in the programme, I believe this adaptation has much more to give.

Frankenstein will run at The Nottingham New Theatre until Saturday 18th May.