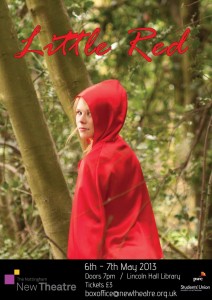 Do not be fooled by what appears to be innocent albeit wise words. I quickly learnt that I was not in for an innocent depiction of the well known fairy tale, Little Red Riding Hood. No, not at all! Alternatively, in the space of an intense 45 minutes I was transported, thanks to UNCUT’s adaptation entitled Little Red, into a land far far away… just not in the fairytale setting sense.

Locked into the cosy and intimate setting of Lincoln Hall Library, I found myself in a comfortable front row seat eagerly awaiting the drama. What initially appeared as an innocent classroom setting quickly spiralled into something a bit more explicit. A dull rendition of poetry is enough to put any student- English or otherwise- straight into snooze mode. Yet, Sam Greenwood (playing the Poet, Peter Wilk) opening with a poetry rendition in a dull and reedy voice was surprisingly successful in grabbing his audience’s attention; for no one can resist a love poem, or more so (in the words of Mr Wilk) a ‘romantic’ poem with its explicit allusions and parallels to love making and sex.

Successful in making the audience writhe slightly with discomfort, this set the tone for a performance exploring the symbolism surrounding childhood ignorance and sexual awakening.  The emotions of adult lust and desire were subverted into something more bestial and sinister; something Little Red, or rather Alice’s, childish innocence could not contend with.

What begins as a schoolgirl passion and infatuation with adult poetry, in no time Alice (Daniella Blackford) and her two thirteen year old school friends Georgia (Nicola Fox) and Frances (Lottie Prosser) are locked into a giggly conversation about growing up and losing their childish ignorance. It so happens that Peter Wilk’s (Sam Greenwood) poetry has such an effect on Little Red that her two friends catch on, teasing and taunting her about her devilish desires.

‘No I do not wish for him to show me his sonnet or smooch his simile!’ Little Red retorts indignantly, a little line I personally enjoyed and which gained a ripple of laughter from the audience. It was thoroughly enjoyable to watch a performance that was entirely devised by director Eve Wersocki Morris, producer Becca Clee and the cast involved. Everyone’s energy and dedication was simply electric and ought to be commended; the intensity of the drama made no error in throwing its audience directly into the action which certainly left me grasping the edge of my seat in anticipation!

Infatuated by Wilk’s experience and seductive poetry our innocent teenager (and us too!) is forced to learn the hard way that a man’s bestial inner impulses are uncontrollable; they can instantaneously transform into wolves and so girls would do best to simply stay away! Therefore, it is on a slightly elevated note that the performance concludes (rather graphically) with the punishment of paedophilic poet!

I would definitely recommend watching this alternative take on a story that many of us hold familiar. Well done to Director Eve Wersocki Morris for an intense and unique performance!

Little Red runs at the Nottingham New Theatre in the Lincoln Hall Library until Tuesday 7th May. For tickets email boxoffice@newtheatre.org.uk

Kurdistan: A Nation is Born