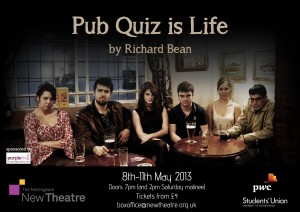 Richard Bean’s Pub Quiz is Life deals with the multiplicity of issues surrounding unemployed modern Britain. Throughout the play, the cast seamlessly deliver dark themes comically without undermining the essence of desperation the characters face. Directed by Jess Courtney, the bold cast successfully manages to synthesise comedy and futility to produce a vivid depiction of modern Britain.

The play darkens as it develops and this transgression is wonderfully translated by Lyle Fulton through the morally ambiguous character of Lee. He brings together the multitudes of issues surrounding modern Britain through his emotive monologue. Although somewhat of a clichéd plot device, Fulton delivers Lee’s misplaced despair credibly and as fully as his character allows him to do so.

Despite the dark nature of the play, the cast discharge bounds of energy and humour providing endless entertainment. Baz’s (Lydia Scott) Christian-smuggling antics provided a light, ironic humour whilst Bunny (Matt Wilks) did a fabulous job of presenting his hardship with brash one-liners. Woody’s character was my personal favourite; his easygoing nature in contrast with his dark profession lightened the tone of the play. Angie (Lal Lumley) and Cath (Sian Beaven) worked well in colouring the scenes and bringing out the true essence of Lee’s character.

This was all performed amidst the brilliantly crafted set; the cast did a marvellous job of interchanging scenes and changing the set accordingly with a touch of music providing an emotional breather throughout the scenes. The lighting also worked particularly well in highlighting pivotal moments, such as Bunny’s delusion of his wife’s death.

Although Richard Bean’s Pub Quiz is Life is relatively linear and predictable in plot, the cast and team do an astounding job of creating an electric, all-encompassing performance providing a take-home message delivered by salty humour guaranteeing plenty of laughs.

Pub Quiz is Life runs at the Nottingham New Theatre until Saturday 11th May 2013. To book tickets email: boxoffice@newtheatre.org.uk