Zombie films are flooding in so thick and fast these days it’s a wonder that there’s anything original out there; we’ve seen the classics, the sequels, the parodies, the zom-rom-coms – we’ve seen nazi zombies, cyborg zombies, voodoo zombies and even an Osama bin Laden zombie, so why did Brad Pitt and his production team ‘Plan B’ fight so hard to procure the rights for Max Brooks’ novel World War Z? Perhaps he wanted to trump Woody Harrelson at being the ultimate destroyer of the undead, or maybe he just needed somewhere to show off his new haircut? The more likely answer is that the story had the potential for director Marc Forster (Finding Neverland, Quantum of Solace, etc.) to create something truly epic, on a scale that encompasses the entire planet (no wonder they had budget problems).

It’s a global disaster movie where instead of the ocean, the world is subjected to wave upon wave of the undead, whose main objective (as with any zombie) is to kill and eat as many of the population as possible. Pitt plays Gerry Lane, an ex-investigator for the UN who has to protect his wife (Mireille Enos) and two daughters from the zombie virus while attempting to discover a cure at the same time. Accompanied by a scientist and a military squad he travels to East Asia where it is rumoured that the outbreak first began.

As an action thriller Forster delivers a relatively engaging contribution to the zombie genre. It’s incredibly fast paced (exactly like the zombie attacks: if you’re bitten, you turn within fifteen seconds) and any scenes that don’t involve running or shooting are usually full of breathy and sometimes incomprehensible exchanges of dialogue. Most of the time this works in carrying you along with the plot, but the sheer speed of the film is so limiting to the actors that for the audience, investing any kind of emotion proves difficult. Pitt never actually has time to give a performance – all he seems to do is demonstrate his sprinting skills. Same with Peter Capaldi, who spends his time strutting angrily down the corridors of a medical research centre in Cardiff. 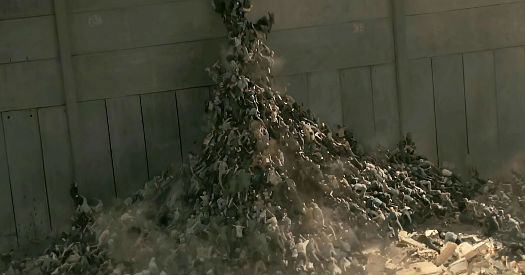 The zombie genre has always been a perfect vehicle for reflecting the fears of the contemporary audience through metaphor: in White Zombie it was slavery, where the resurrected corpses were forced to work in the sugar cane mills; in Romero’s Dawn of the Dead, the zombies attacking the mall represented mass-consumerism, and in more recent years films like 28 Days Later and [REC] dealt with incurable diseases and world-wide pandemics. What’s interesting about World War Z (and actually one of its strengths) is that it could come to resemble our declining economies and the steady rise of unemployment, or even (and the title gives it away) the fear of another world war. Lane’s journeying to the army bases of South Korea and Israel evokes the setting and atmosphere of many present day war films, especially Bigelow’s The Hurt Locker and Zero Dark Thirty, and serves as a reminder that the film is very much grounded in reality. Apart from a few scenes here and there, the film never shies away from depicting the brutality of the zombie attack and its effects: there are moments that are genuinely quite shocking – at least we’re not given another dumbed-down Die Hard 5. 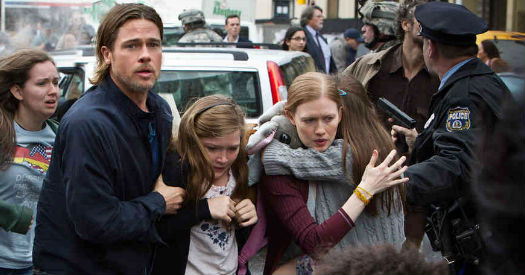 Pitt made a gamble with World War Z, but it seems to have paid off. Forster’s directing and Damon Lindelof’s re-hashing of the script may have angered fans of the original novel, but the end result is not as terrible or as commercially-driven as it could have been.