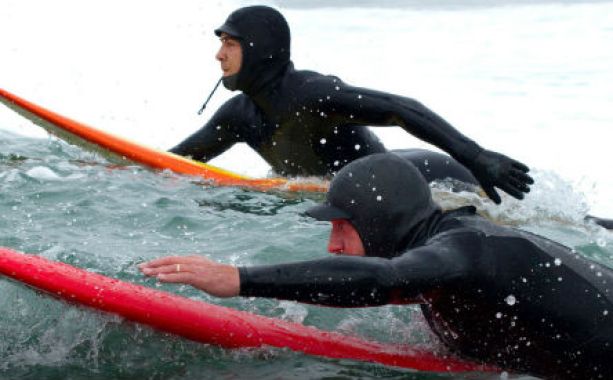 Last summer it was comic book heroes, this summer it’s the apocalypse. Every year the summer blockbuster season is dominated and often saturated by a number of films that are of the same family, trend or theme. This year we’ve had World War Z, The World’s End and This is The End leading the unvaried Hollywood charge. With this in mind, a ‘true-story’ USA surfing biopic has all the credentials to be a much needed, refreshing break into a genre that is by no means overdone. Surfing films are not many in number and have the ability to show us a world truly understood by few but admired by millions. With the stage set, Chasing Mavericks has managed to combine all the necessary ingredients for a razor sharp, thrilling, real life adventure flick but instead produced a mellow, mildly disappointing anti-climactic mess. Where has it all gone wrong?

The plot has no obvious flaws in it, but nor can it be said to be overflowing with originality. 15 year old blue eyed boy and fanatical surfer Jay Moriarty (Jonny Weston) discovers a surf break that is thought to be nothing more than surfing folk-legend almost on his doorstep.

The ‘mavericks’ breaks are amongst the most intense, colossal and lethal on earth. Jay enlists local surfing legend Frosty (Gerard Butler) to aid him in training not only to surf but survive the immense waves. Naturally the teaching goes beyond surfing, and the lessons are as much about life as surfing.

This is truly where the film’s clichés enter the realms of the ridiculous and the picture boldy falls off its path, Butler bestowing nauseating pearls of wisdom such as “If you look hard enough there’s always a way through.” There is pleasant enough function in the supporting characters, coming from Jay’s Mother (Elisabeth Shue) providing the burden of an alcoholic unreliable mother to our hero, making him even more angelic.

The best of the ensemble comes undoubtedly from Frosty’s loving and attentive wife (Abigail Spencer), effortlessly commanding a caring and yet melancholy aura whilst on screen, and giving the picture some much required depth.

Credit has to go to the visual aspects of the film; the look of the picture is confident and impressive. There is definitely some imposing surfing footage to enjoy here, especially in the closing stages. Whilst the costume and cinematography departments have managed to keep a realistic and grounded vision of ‘surf-life’ in the 80s, a praise-worthy effort as stereotypical clothing and visions are all too easy to fall into.

Mavericks seems to be a film that has lost its way, there is no doubting the talent of co-directors Michael Apted and Curtis Hanson, nor the love or passion for the subject. What seems to have gone most awry is Butler’s role (and his deplorable Californian accent.) He is not so much out of his depth as purely playing beneath his ability. The script is wooden at best and he has simply backed a losing horse. And yet, despite its considerable collection of foul-ups and faults, by the end I actually found myself guiltily enjoying it.

“If you look hard enough there’s always a way through.”

I think the key to enjoying Mavericks is don’t expect too much and don’t judge too harshly. It tells a story of something truly remarkable. It is by no means a ground-breaking piece of cinema and its flaws are glaring, (this is not one for cinematic perfection seekers.) But at the same time once you cut through the clichés and corniness it is a satisfying depiction of a story that a lot of people care about a great deal, and one that certainly deserves to be documented. It is the sort of film that will become someone’s favourite no matter how harsh the critics are, those who love the story and the world it depicts will still love it regardless, and rightly so.

From Ireland to Texas: The Continuing War over Abortion