Written and directed by Jeff Nichols, whose last two features, Shotgun Stories and Take Shelter, thrust him blinking and shivering into the public eye, Mud is a deep-southern drama about loyalty and the consequences of love and sees Matthew McConaughey continue his ‘McConaissance’ as the enigmatic title character.

The story follows Ellis and Neckbone, two teenage boys living in Arkansas, who travel to an island on the Mississippi river where they find a boat wedged firmly in the branches of a tree. On climbing up they realise that someone has been living below deck and decide to leave, but when they return to their own boat they meet Mud, a man with a gun in his belt and a tattooed snake running up his arm. Distrustful at first, eventually they form a strong friendship with Mud, and bring food to him while attempting to help fix his boat. Out in the real world however, Ellis’ parents are on the verge of a divorce and Mud is wanted for murder. 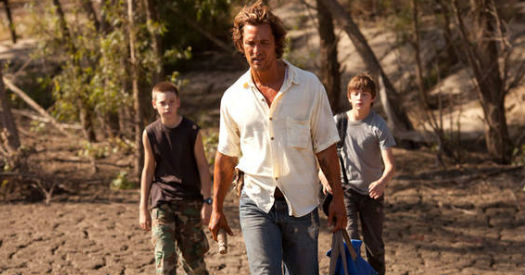 As last year’s Killer Joe proves, McConaughey has shed his romantic-comedy skin and has now been reborn Christ-like into the world of dark indie dramas. Gone are the days of Failure to Launch and Fool’s Gold; just watch him eat a can of baked beans with his fingers to see that he’s a changed man. In the character of Mud he seems to have found a comfortable niche for himself, playing someone almost fantastical in how he lives – governed by superstition (the crosses in his boots, his lucky shirt to protect him from snake bites) and unwilling to confront his less than admirable past, he appears at first to be a father figure for the two boys, but as events unfold he becomes almost tragic, literally depending on them for survival. Tye Sheridan, who rose to fame as Brad Pitt’s son in The Tree of Life, plays Ellis with the sort of innocent determination that, along with his co-star Jacob Lofland, injects the film with the naivety of Rob Reiner’s Stand By Me; it’s because the story of Mud is told primarily from their perspectives that makes the film so engaging. 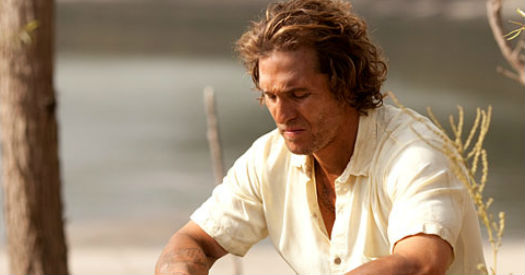 Nichols’ main strength lies in his Malick-esque ability for capturing the atmosphere of a place, while also including an underlying layer of the supernatural; in this case the influence of Beasts of the Southern Wild is unmistakable: the river location, a tone that verges on the Southern Gothic, even the boat in the tree – the two films are not that dissimilar in terms of aesthetics or character. However Mud, like Take Shelter before it, suffers from an over-long running time; at just over two hours the film feels stretched and unable to support the fast-paced events of Nichols’ screenplay. The dialogue is masterfully concise but in the end it’s left with too much space to fill and the film would benefit from removing several scenes and even certain plot strands. A good example would be Reese Witherspoon’s character, for though she might be an important character, she is entirely uninteresting and forces Mud at times to lose its focus.

A modern American fairytale, Mud is perhaps more enjoyable than Nichols’ previous work, but you get the feeling that his best is still to come.