Review – Now You See Me

“Come in close. Because the more you think you see, the easier it’ll be to fool you…” Not only do the distributors of Now You See Me use this piece of gripping dialogue as the tagline, the studio has utilised this to trick audiences into delving into their pockets and wasting their time with this enormously disappointing and unexciting caper film.

Now You See Me follows the story of four magicians, known as The Four Horsemen, as they captivate the world with ‘magical’ bank heists before rewarding their audiences and supporters with the money they take. The only trickery happening here is being hypnotised by the highly intriguing trailer, only to find you yourself have been robbed as you sit in disbelief that you paid to see a film that is about as unique and intricate as a game of snap! 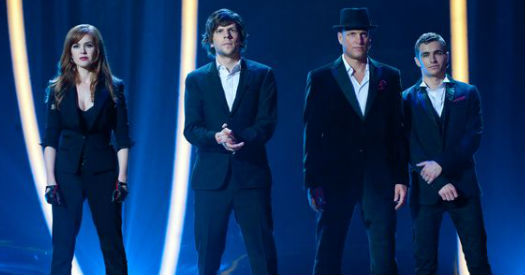 Despite the sensational ensemble of Jesse Eisenberg, Mark Ruffalo, Woody Harrelson, Mélanie Laurent, Isla Fisher, Dave Franco, Michael Caine and Morgan Freeman, they fail to assemble accordingly. They all deliver satisfactory performances but are not given the opportunity to flourish as we may have seen them do so in past roles. This is primarily due to the fact that director Louis Leterrier, along with the writers, attempt to pull too many rabbits out of the hat at one time and so rather than enjoy one bunny at a time, we instead see a ton of terrific actors be undervalued and restricted in showcasing their talents. Most oddly, The Four Horsemen (Eisenberg, Fischer, Harrelson and Franco) are given surprisingly little screen time after their thirty minute introduction. 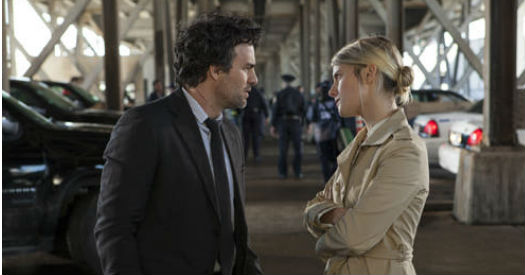 Now You See Me does remains consistently unintriguing. The aforementioned tagline, along with unsubtle hints scattered dubiously throughout regarding the illusionary concept of misdirection, completely ruin any surprise and suspense. By doing this the film leaves little to be unveiled during the climax. Time is wasted explaining all these obvious plot points while conjuring up new components to the story that remain unresolved and/or illogically explained to the extent that even in a film about magic, you fail to believe any of the tricks being performed. The illusion of cinema fails as much as the illusion of magic fails to prevail in Now You See Me.

Now You See Me is comparable to the student who believes they are the cool fresher on campus, the funniest, with a unique personality, and a mistaken sense of self-intelligence that causes them to continue to contribute to seminars despite the fact they never answer anything correctly. No, in fact, Now You See Me needs to be told by its peers (let’s say that’s us) that it is not nearly as intellectually gifted, cool, witty or exceptional as it pretends to be. You most certainly will not miss out on anything if you choose not to befriend this dull, generic and embarrassingly misleading film, that is posing as an intricate and sophisticated figure on the surface. 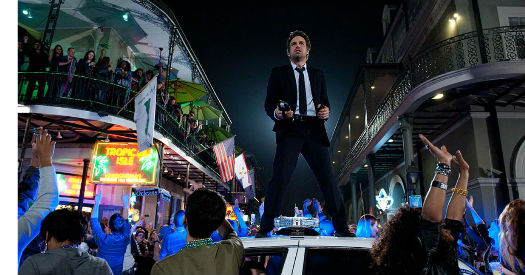 When the first thought on my mind after exiting the cinema was “I actually wish the film had been sold out so I could have returned home to watch The Prestige or see Man of Steel again”, you get the sense of my disappointment with Leterrier’s latest offering. While there is nothing necessarily evident to hate in Now You See Me, there is not a single component to commend. Now You See Me is truly a forgettable 115 minute time thief, and though I have Seen it Now, I would have preferred instead to have missed it and been kept under the illusion that it was in fact an intricate tale, rather than a misdirected fail.