After the vapid and navel-gazing study in celebrity boredom that was Somewhere, Sofia Coppola’s latest may appear to some as a return to what she does best, teenage anxieties and the dreamy world of the rich and famous. However, despite a welcome return to a more traditional narrative, The Bling Ring ultimately ends up reproducing most of the sins of its predecessor, that is, an ambiguous sense of complacence, a relatively heavy-handed didactic rhetoric and more importantly, a feeling that what has been said has been but the somewhat futile repetition of what we all already knew.

Loosely adopting a structure reminiscent of Scorsese’s Goodfellas, The Bling Ring tells the ‘true’ story of the group of young Los Angeles celebrity burglars that would come to be known as The Bling Ring. Following Marc, the self-aware new kid on the block, and his progressive entrance into a group of young girls emulating the lives of their idols, Paris and Lindsey, by robbing the cars and houses of the celebrities inhabiting the hills of L.A, Coppola invites us to enter the world of the rich and famous, or rather of the wannabe rich and famous, through the backdoor.

However, and like The Social Network to which it borrows another structural effect, the interview-deposition voice-over, The Bling Ring presents itself as doomed from the start. From the outset, an interview with Marc for what we later realise is not a prosecution but the Vanity Fair article upon which the movie is based, sets the tone. Coppola’s film is more than a simple dream-like exploration of teenage dreams of stardom. Rather, The Bling Ring proclaims itself, maybe slightly too loudly, an overt criticism of America’s cultural fascination for the destructive tendencies and empty lives of its celebrities.

‘Rebecca just wanted to be part of the lifestyle. The lifestyle that everybody kinda wants’

Unfortunately, this might also be where the movie’s flaws are most obvious. Although it pretends to criticise the pathological over-consumerism of a generation raised on reality TV and celebrity magazines, The Bling Ring ultimately ends up participating in, if not directly reinforcing, what it denounces. The presence of Emma Watson, a child actor turned Lancôme effigy in less than a few years, among a casting made of supermodels already hints at the idealised nature of its narrative. The glossy cinematography superimposed to a soundtrack made of all the latest pop hits results in a final product which does not solely reproduce or document the life of those child-robbers, but actually glamorizes it and ultimately invalidate its intentions.

If one could suggest this re-appropriation of the visual language of MTV to be part of Coppola’s voluntary criticism of the media coverage of such affairs, the feeling that her audience is invited to dream with her protagonists, to actually want to become them, in a move mirroring what the Bling Ring themselves are ‘victims’ of, cannot but hinder, if not directly curtail, the full potential of its criticism. 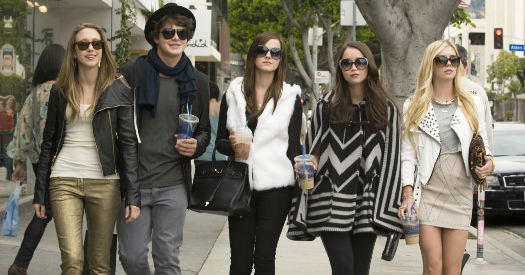 Bordering thus on complacence, coming from a woman who herself belongs to the idealized world that her protagonists seek so desperately, Coppola’s portrayal of her five wannabe-famous teenagers is moreover often didactic to the point of naiveté. This effect of redundancy is primarily due to her decision to include a voice-over which unfolds more often than not as an explanation of what may already be inferred from the narrative itself. Most evident in Marc’s explanation that ‘Rebecca just wanted to be part of the lifestyle. The lifestyle that everybody kinda wants’, or that their ironic newly-gained celebrity shows America’s deep-seated fascination for Bonny and Clyde figures, the movie’s ending will appear to some as a painfully obvious observation on the current state of the American dream.

And here lays the real problem of The Bling Ring, that is, its ultimate futility. After watching ninety minutes of shoe-shopping, dress-gazing and cocaine-and-alcohol-fuelled partying, the question that remains is whether Sofia Coppola did more in The Bling Ring than say out loud what everybody is already saying out loud? Is there more to her latest than a not-so-subtle exploration of our cultural dream of celebrity? A quick glance at any magazine stand will tell you that our culture is obsessed with the ups-and-downs of its celebrities. As it stands, The Bling Ring is not a bad movie, at worst it could be said to be slightly boring. But the real question which lingers long after the credits finish rolling is did we need a ninety minute reminder of our hopeless and often borderline sadistic fascination with Paris Hilton and her clique? Probably not.

The birth of a prince: A cynic reports