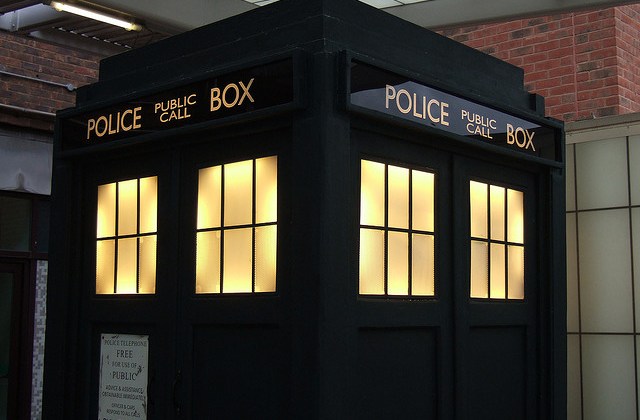 November 23rd will mark the 50th anniversary of the longest running sci-fi show in the world – Doctor Who. The show has come a long way over the years, as has the science behind the fiction. The writers in the 60’s wrote of fantastical scientific advances they could only imagine such as personal computers, cordless phones and landing a man on the moon. 50 years on, how does the science in the show hold up to scrutiny?

Doctor: ‘People assume that time is a strict progression of cause to effect, but *actually* from a non-linear, non-subjective viewpoint – it’s more like a big ball of wibbly wobbly… time-y wimey… stuff.’

Good news for you wannabe time travellers! Physicists believe that time travel is in fact possible. However, the trips in time to see the technology of the future or the first live performance of the Beatles’ will have to wait. The power needed would be immense – so huge that only a machine that, for example, could pull the Earth across the universe, would be able to generate. But if it is theoretically possible and the human race continues to advance at its current speed, where are all the time travellers? Stephen Hawking is convinced that time travel will be possible in the future. To prove it, he organised a time travellers party with invites sent out only after the event. Unfortunately, no one showed up.

“The sonic screwdriver may still be sometime in the making but ultrasonic technology is already making its mark in the medical and manufacturing arenas with some exciting results… we could potentially undo screws!”

Jack Harkness : ‘Who looks at a screwdriver and thinks “ooh, this could be a little more sonic”?’.

Well, writers for the second doctor back in 1968 thought exactly that. Amazingly, scientists at the University of Dundee have developed a wand like device that uses ultrasound waves to levitate and rotate small objects in water. Although it may sound like a wacky project, it may be incredibly useful in the medical world. The device could steer drugs towards the places they are needed, such as tumours, and rotate them to get them in the exact position needed without surgery. Dr. Bruce Drinkwater added, ‘the sonic screwdriver may still be sometime in the making but ultrasonic technology is already making its mark in the medical and manufacturing arenas with some exciting results… we could potentially undo screws!’

Rose: ‘How come you’re an alien you sound like you’re from the north?’

Doctor: ‘Lots of planets have a north!’

Ok, so the science and, occasionally, logic behind the aliens in Dr. Who doesn’t always hold up. For example, why didn’t the daleks ever invade anywhere with disabled access? However, astronomers are convinced that aliens must exist. The universe is so large and there are so many stars with the potential to have habitable planets that there is almost certainly life out there. Unfortunately, they are likely to be so far away that even if travel at the speed of light were possible, the trip would take far too long. Any civilisation that did turn up wanting to make contact would be far more advanced than our own if they had the technology to make the trip. Therefore, the likelihood of them being able to obliterate us is high although the chances of a different species turning up to destroy us every Christmas are definitely stretching the odds. Aliens would definitely look very different to us – given that their environment would be different they would have to adapt differently. A dark planet would produce creatures with large or multiple eyes, a dense planet with high gravity would have short, stout inhabitants and a cold planet would have a population covered in thick, dense fur. Of course some of the crazy monsters in Dr Who are purely fiction. I mean, the weeping angel’s trick of turning to stone when observed could never happen right? Wrong! Although admittedly not alive, uranium does not decay when being observed so if you want to preserve some uranium, whatever you do, don’t blink.