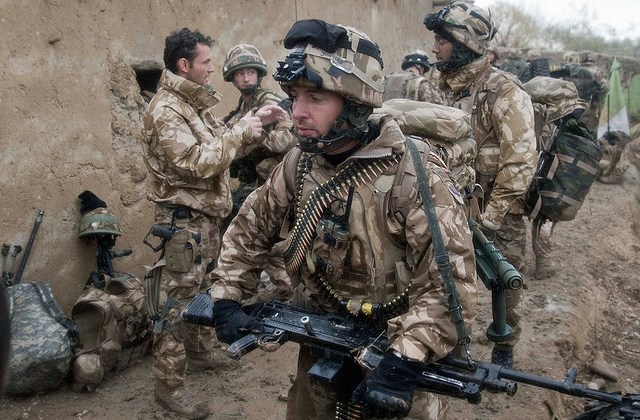 In December the Guardian conducted a Freedom of Information request regarding university recruitment visits by the British armed forces, and at Impact we also published an article representing an array of views on the topic.

Opinions divide between two main points: ‘it’s a bad thing’ versus ‘it’s not such a bad thing’. The army is, by it’s very nature, a controversial organisation. It’s therefore unsurprising that their involvement in university life is a point of debate. However, some of the justifications made are somewhat surprising.

The Impact article quotes a student and society president at UoN as saying, “the military shouldn’t be trying to convince people to join”. This argument, in and of itself, is simply ludicrous.

In a country as powerful and populous as Britain, we are not currently in a position to disband the Army. How then, can we suggest that they should not make any deliberate attempts to recruit? This is clearly a fallacy of contradictory premises: we need the armed forces, but do not want them to consist of any actual soldiers.

Aside from being heavily patronising towards international students, he appears to be under the impression that members of the Army regularly march unannounced onto campus, guns blazing (they don’t).

“He appears to be under the impression that members of the Army regularly march unannounced onto campus, guns blazing…”

This point of view also completely undermines our autonomy as a student body. It is condescending, offensive even, to suggest that educated adults will make unthinking, un-researched decisions about their careers. That we will hear words like ‘glory’ and ‘adventure’, and suddenly forget all the hard work we have put into our educations thus far.

But it would seem that these opinions are not in the minority. George Iordanou, a doctoral researcher at the University of Warwick, argued “universities shouldn’t be making the political decision of allowing them to be on campuses”.

This somewhat dictatorial approach seems horribly popular at the moment. The idea that universities should simply ban armed forces is akin to banning pole-dancing societies or items of cultural dress.

This somewhat dictatorial approach seems horribly popular at the moment.

If universities boycott the army on the basis of a political and moral judgement, surely they should be reconsidering oil companies due to their effect on the environment, or pharmaceutical companies for their use of testing methods. In short, our university should not be making our decisions for us, but equipping us with the tools to make them for ourselves.

The Impact article, diplomatic as it was, received only one major criticism. ‘Anon’ left the following comment: “perhaps next time Impact could actually try talking to students who’ve been through the military recruitment process”. So that’s exactly what we’ve done.

George Aldridge, a former student and now a Lance Corporal in the British Army, spoke to Impact about his recruitment: “I took the advice on board and chose a job that suited my future career plans and have since experienced things I had never thought possible.

“I often envisage a future in which a British standing army is not necessary”.

“When I next get promoted I have the opportunity to complete my accountancy qualifications. You are always a soldier first in the British Army, however there are jobs to suit a vast variety of people from all backgrounds”.

I do not consider myself the number one supporter of the military. Like many of those expressing concern over the recruitment visits, I often envisage a future in which a British standing army is not necessary. I would also never choose a career as a soldier for myself. But that is my exact point: ‘choice’. Joining the armed forces is a choice. One I think we, as students, but also as adults, can make for ourselves.