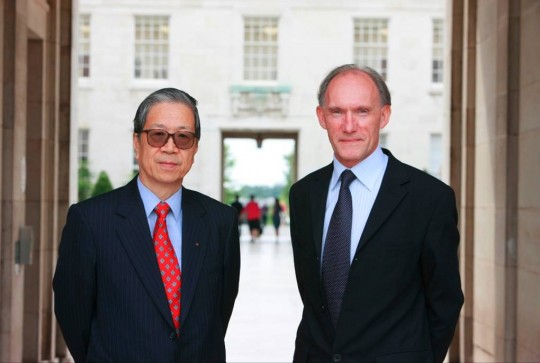 So Nottingham students, who exactly is the vice-chancellor of your university? Who is the leader of this institution, the person with whom the buck ultimately stops?

If, like me, you’ve had no idea for most of your time here who the big cheese is, you are not alone. Let’s face it; the average British student would probably fail to recall whichever suited academic happens to be running things at the moment. Approaching my research in true scholarly fashion, a quick Google search told me the vice-chancellor at the University of Nottingham is David Greenaway, an economics professor here since 1987.

If his name doesn’t ring any bells, you will take notice of Greenaway and his counterparts once you hear what they are earning. At Russell Group universities in 2013, vice-chancellors pocketed an average pay rise of £22,000, an 8.1% increase on the previous year’s wages. The generous benefits packages they receive in addition, typically in 5 figures, have increased by 5.2% over the same time period.

At Russell Group universities in 2013, vice-chancellors pocketed an average pay rise of £22,000.

These are the kind of statistics that will, understandably, turn many students red with rage. Struggling under increased tuition fees and the mountain of debt that accompanies it, such salaries hardly seem just. Only a few years ago we were told higher education finances were in such a sorry state, and that austerity and cuts were essential. Yet it is not only undergraduates that will fail to see the justice in these pay bumps. Lecturers around the UK recently went on strike to protest against what the Unite union calls a “13% pay cut in real terms since 2008”.

A real leader should lead by example, and if those at the bottom take pay freezes, those at the top of the university chain should feel the effects of austerity too.

Contrast that with the new director of the LSE, who received £446,000 last year, double his predecessor’s 2012 income. This comes at a time when University of London cleaners recently went on strike for respectable pay and dignified working conditions. A real leader should lead by example, and if those at the bottom take pay freezes, those at the top of the university chain should feel the effects of austerity too.

It is therefore to the credit of David Greenaway that his pay did not increase in 2013. His current salary of over £340,000 a year is still an incomprehensible amount of money for most of us, but in perspective with other institutions it is more reasonable. After all, the vice-chancellor at Nottingham Trent gets paid more than Greenaway, as do a number of others at lower ranked universities. He would certainly have a right to query why he is paid less than many others.

The vice-chancellor at Nottingham Trent gets paid more than Greenaway.

Remember that headmasters at top private schools regularly receive north of £200,000 per year for running secondary schools. You would expect the leader of an international research institution, with tens of thousands of students and employees, to be paid significantly more than a head teacher. The Russell Group has also pointed out that pay for vice-chancellors in the UK is dwarfed by that of their contemporaries in the USA and Australia.

This debate won’t go away, so long as other universities keep raising the income of their top staff.

These facts mean the pressure will no doubt be building up in some quarters for a pay rise, to keep our vice-chancellor’s salary competitive. This debate won’t go away, so long as other universities keep raising the income of their top staff. A huge pay bump for Greenaway in the near future would simply not be acceptable to most students or staff. Yet we want to ensure he and other talents stay in Nottingham.

Ultimately, the likes of Greenaway and Chancellor Sir Andrew Witty are huge credits to this university. We are lucky our vice-chancellor is a man who has the experience of serving this university since 1987, rather than being recruited from elsewhere when the position became vacant. Greenaway, as well as many of the pro-vice chancellors and professors, could probably be making much more money in the private sector if he so desired. It is out of a commendable dedication to teaching he keeps his talents here.

Cutting Greenaway’s wages would be no more beneficial to UoN than raising them.

Our vice-chancellor’s commitment to the University is indisputable, but even he could not be blamed for eventually trading in his office in the Trent Building for one at a private company. Greenaway’s loyalty to Nottingham should make him realise taking a pay bump now will only cause resentment amongst his students and employees. Yet we students should also understand why we need the likes of Greenaway, and that cutting his wages would be no more beneficial to UoN than raising them.

Defeats Are Inevitable, So Don’t Throw Your Moyes Out The Pram