“Half of history is hiding the truth.” – The effect of video games meddling with the past

The titular quote comes from Joss Whedon who is communicating the ambiguity of history due to contemporary disagreements about what actually happened. This has led to a certain fascination with the subject by almost everybody; academics, politicians, journalists and, most importantly, creative industries.

The past is an incredibly rich well from which all sorts of stories can be drawn, therefore it is inevitable that video game designers would probe the area sooner or later. But as the sixth major instalment in the historical epic series Assassin’s Creed is released, some questions need answering. Are the use and/or abuses of history by video games acceptable? And is it possible that video games based on historical events may influence gamers’ political views?

Novel settings are a major attraction when constructing a game.

Firstly, one should question whether historical games are truly a good thing. Certainly, novel settings are a major attraction when constructing a game and certain franchises make full use of this. The aforementioned Assassin’s Creed set its first instalment in the medieval Holy Lands, immersing the player in a 12th century world that stunned gamers everywhere. Let down by repetitive mechanics, the second game took this idea and turned out to be, quite frankly, a masterpiece. Assassin’s Creed II, set in 15th century Italy, actually harnessed history; authentic figures, locations and habits all became part of the narrative and something utterly unique was created.

This winning formula demonstrated history’s potential to be a springboard, rather than some shackles. Such a formula was repeated in Rockstar’s critically acclaimed Red Dead Redemption, which placed players in the shoes of an outlaw during the dying days of the American West. In these games history is clearly twisted but we simply don’t care! They were beautiful lessons in the past regardless, and Assassin’s Creed II’s factual information on certain locations and people was only a bonus. Crucially, no immoral message was being conveyed and deviations from fact were for purely creative reasons which served the games very well indeed. 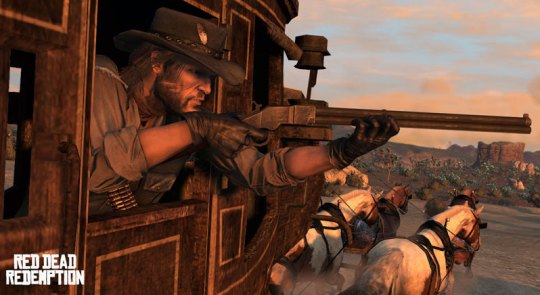 Historical manipulation may only go awry when such virtues are inverted, namely where the past is used and/or changed for reasons which serve little purpose and do not enhance the player’s experience. The Call of Duty series has a somewhat chequered past in this area; whilst the original games shed light on the horrors of World War 2 (though I may slightly rebut that later on), their position seems less clear nowadays. Make no mistake, 2007’s Call of Duty 4: Modern Warfare was an excellent game which brought the series’ strengths up to the present day and certainly changed the genre forever. But subsequent instalments have treated the various conflicts somewhat inappropriately. The harrowing nuclear attacks of Modern Warfare have been since foregone for ridiculous sequences of combat in space, underwater and on American soil.

True, the genre differences between role-playing/adventure games and first person shooters partly explain this discrepancy, but recent conflicts throughout the Middle East surely deserve better attention than this. Interestingly though, first person shooters (by their very nature) seem to be better off rigidly sticking to historical fact, contrary to previous statements which govern different game types. Real time strategies further muddy the waters; the Total War series allow for complete deviations with history but remain strong as a franchise. Again, differences in genre beg the question of whether RTS players are more interested in using history as a tool to aid their own imagination. In which case, it seems highly suitable that Rome and Medieval titles should give these people the ability to create their own stories using the respective pieces of the past. Therefore, one may conclude that genre, above all else, determines much of the content’s appropriateness.

The radio stations in Grand Theft Auto are an integral (and hilarious) part of the entire series’ indictment on Western hedonism and hypocrisy.

It is also important to consider the possible impact of historical games upon players’ political views, perhaps by indoctrinating them with certain ideologies. I shall preface this by saying that it truly isn’t an issue in my mind and whilst future Kaisers and Presidents will come from many walks of life, gaming experiences would not be an integral part of their development. That said, some messages conveyed by certain franchises are fascinating to pick apart. As I mentioned, FPSs without Modern Warfare’s grim underbelly may nurture an unhealthy appetite for war and conflict. The radio stations in Grand Theft Auto are an integral (and hilarious) part of the entire series’ indictment on Western hedonism and hypocrisy. Perhaps a few more cynics and satirists is no bad thing. Moreover, conspiracy theories in Black Ops and Assassin’s Creed are obviously harmless but do train players to think more widely about seemingly cut and dry issues.

In conclusion, history may be twisted, abbreviated, expanded upon and questioned but, like many things in life, it all depends on the occasion.

Follow Impact Gaming on Facebook for more of the same. If you liked this, why not read this or this?

Kiss Me Like You Mean It @ Nottingham New Theatre