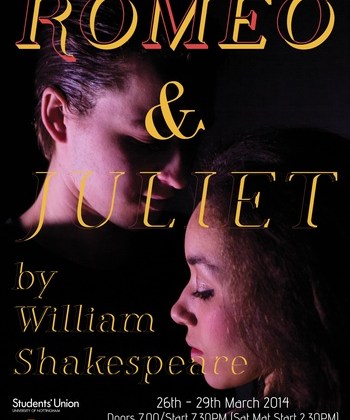 ‘For never was a story of more woe than this of Juliet and her Romeo…’ The star-crossed lovers, doomed by fate: it’s a story we all know. Whether from swooning over Leonardo di Caprio, banging your head against the desk in English lessons in school, or humming along to West Side Story, you may feel it’s been done to death; well the New Theatre proves you wrong.

With the swirling pattern of vines painted all over the walls and floor and the billowing chiffon curtains, the first impression is a worrying one; will this be a cheesy over-acted romance? But this is quickly destroyed by the opening scene, where – those of you who don’t already know the ending (how?), look away now – the Friar is questioned on the lovers’ deaths in an intense interrogation scene. This sets the audience up nicely for this updated version of Romeo and Juliet.

Despite my initial worry that the traverse stage would be a distraction (facing other audience members can end up with you watching them instead of the performance) the characters’ fast paced and well-choreographed movement kept me entertained and engaged through the three-hour performance. Being sat directly on the stage meant that I had to crane my neck to see what was happening at the other end. But if you can get a front row seat do: the cast members involved the audience as much as possible, especially in the first few scenes. The use of lighting made the most of the simple stage, transforming it from warm, tender romance to creepy tombs and interrogation chambers. During one ghostly scene I felt shivers running down my spine, whilst one character’s use of a torch to reveal dead bodies had me on the edge of my seat.

The acting was superb. .  . Romeo especially pulling off the petulant teenager act well

The acting was superb, with the main pair (Diderik Ypma and Aimee Gaudin) really bringing out the youth and naivety of their characters; Romeo especially pulling off the petulant teenager act well. The Nurse (Holly Daniels) and Mercutio (Aaron Tej) both also deserve a mention, whilst the rest of the Montagues created a brilliant family dynamic that had me wanting to know more about their lives behind the closed doors of the mansion. The cast members all seemed to be having a lot of fun, especially with the drunken scenes. The party at the Capulet house was a particular highlight; the dancing was, for some actors, brilliant, whilst for others hilariously terrible. Fortunately this was played into the script seamlessly.

The comedy was really brought out of the script, so go expecting to have a good laugh. The tone of the play was definitely aimed at the student audience. The director had made the most of any possible innuendo in the language (some were quite a stretch!) accompanying them with vigorous thrusting and crude movements. Despite this, the love scenes between the two lovers were handled with surprising tenderness. There were definitely a few tears being wiped away during the more emotional moments.

The language of Shakespeare is notoriously difficult, and there was a little tripping over lines and confusion. In some particularly speech-heavy scenes the aim did seem to be to get it over with as quickly as possible, causing difficulty for the audience to keep up. However, this was more than made up for by the tongue-in-cheek pokes at Shakespeare’s flowery language; I particularly enjoyed the running jokes about certain characters not knowing when to stop talking.

This play is definitely aimed at those who may not be die-hard Shakespeare fans; the use of colour in the costumes helped keep track of the many characters and their alliances, whilst the cast’s upbeat and unending energy will keep you laughing and gasping throughout the play; even if your attention may wander during the long soliloquies. Even if you’ve never been a Shakespeare-lover, this play is definitely worth a watch.

Romeo and Juliet is on at Nottingham New Theatre until Saturday 29th March. For more information please see here.

Have we really seen the last of Hayao Miyazaki?