With exams over, and the Summer fast approaching, it’s soon to be festival season. With Field Day this weekend, and Glastonbury not far after, Blissfields comes around on 4th and 5th July. Here are 5 must sees from the weekend:

Playing on the Wild Stage this year include some incredible artists, however one of the best has to be Spector . The band played a sold out show at Spanky Van Dykes at the end of last year, and it proved to be one of the greatest shows of 2013 (see the review here). With a new album being released this year, and a tour surely to follow, go check out the London band’s new material mixed alongside the classics, it is sure to be a great show.

Headliners 2ManyDJs are one not to miss, they don’t just provide a standard set, the visuals and special effects produce something rather spectacular. Headlining the NME stage at Leeds and Reading in 2011, they produced one of the finest sets of the weekend (far better than anything Muse could have done). The two men are masters of their trade, and should be checked out this year at Blissfields.

With an incredible album released this year (review here) and a sell out show at Nottingham’s Bodega (review here), he has proved he is one very talented young man.His songs are up beat and if the suns out, with a pint in hand, it will be a perfect combination.

Johnny Flynn will provide a similar vibe to Dan Croll , playing a smaller stage, the intimacy and overall vibe will be on a next level. Blissfields provides a great role in supporting new artists, and there really is some incredible talent on offer. Although the main acts are also on a great level, it is really worth taking some time out of your day to support the new artists, because you never know one day these intimate gigs you see, may turn into headliners.

Bruno Major is the pick of the new artists on offer, he has had massive support from Radio 1 along with many others. With Blissfield not only supporting new artists but huge dance acts including the likes of Kidnap Kid, Bruno Major will be a great change of pace to the rest of the line up. Once more, it is about supporting your new artists, so try something new, you never know, he could be your new favourite artist.

Blissfields is sure to be huge this year, the vast variety of acts on offer, from the biggest to the smallest, it is sure to be an incredible weekend. Have a look at the line up below, and whilst you choose the big acts, have a punt and choose someone new. 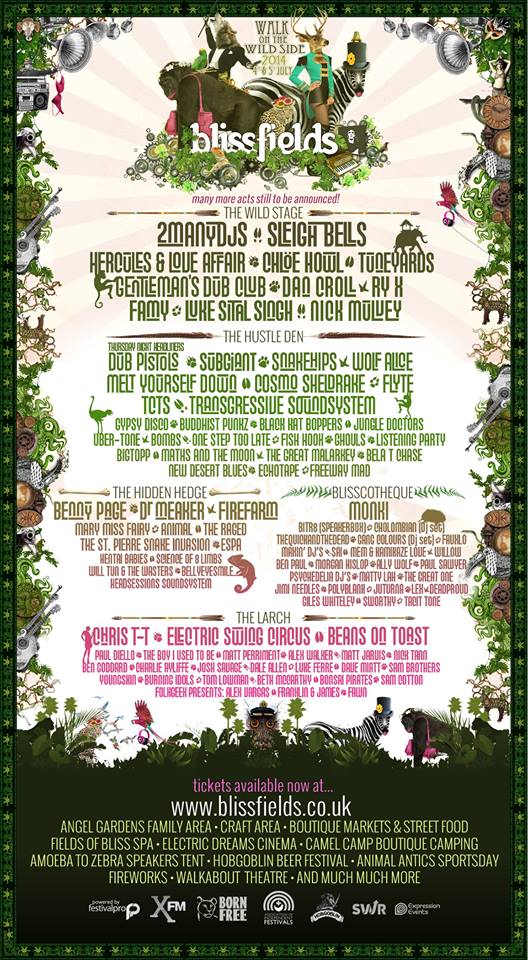