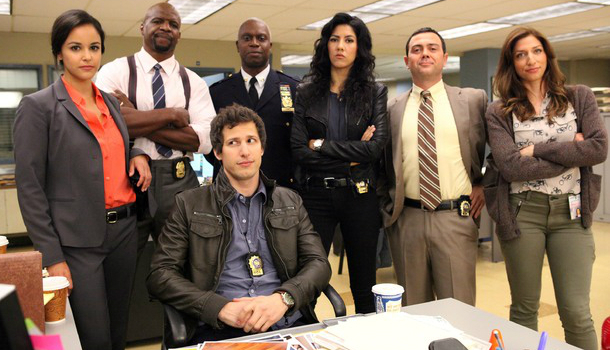 FOX’s Brooklyn Nine-Nine concluded its first season in the UK last night on E4. The Golden Globe winning sitcom began airing somewhat aimlessly on this side of the Atlantic in January, holding an uncertain place in the entertainment schedule of this generation’s love it or loath it attitude.

Fortunately, after taking its first few episodic strides at a slow pace, Brooklyn Nine-Nine found a comfortable tempo in our timetables as a frivolous, eccentric crime comedy cop show, and one of the best offerings from last season’s television calendar.

A mockumentary-esque workplace comedy, Brooklyn Nine-Nine follows the immature but dedicated Detective Jake Peralta (Andy Samberg) and the rest of NYPD’s 99th Precinct, as they adjust to their new stern and non-smiling Captain, Ray Holt (Andre Braugher). They embark on office and field journeys of crime-solving from vandals, purse-snatchers and even their own in-house IT hacker who leaks the detectives’ search histories, amongst other craziness over the course of the season. 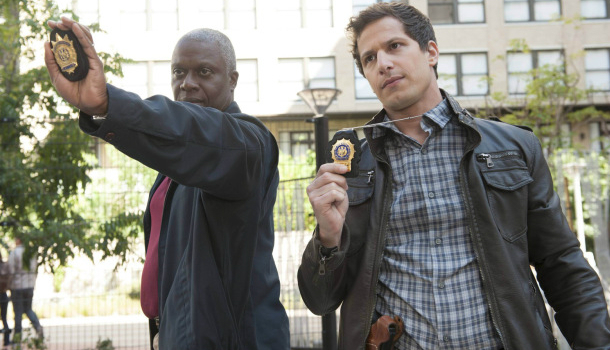 When you think of a crime show, you think Law and Order: SVU or NCIS, and you think of those heavy storylines where at some point or another the police officers’ lives are in danger. Brooklyn Nine-Nine on the other hand, proudly describes itself as “the law without the order”, and rightfully so. The foregrounded comical element adds a new perspective into the crime genre.

While the cop cases themselves provide the main plotlines for each episode, it is definitely the cast of characters in the precinct that warrant your return to the show. It could be the straight-talking Captain Holt that catches your attention with his no-nonsense attitude and amazing ability to not show any emotion despite his wicked one-liners. In addition to Holt, we have alternative characters like the administrator Gina Linetti, who keeps a watchful eye on all the members of the precinct. Despite not being a detective, Linetti (Chelsea Peretti) gets her own fair share of storylines and quirks like the rest of the gang to keep you interested.

To round up a few of the more notable characters, we also have the over eager Detective Santiago (Melissa Fumero), who may or may not be the potential love interest for Peralta. Then on the other end of the spectrum, we have Detective Rosa Diaz (Stephanie Beatriz), who takes no stick from anyone and very clearly has a strong, tenacious image from the outset. So in essence, the show has managed to incorporate all conceivable stereotypes of cops into one show and miraculously make it work. 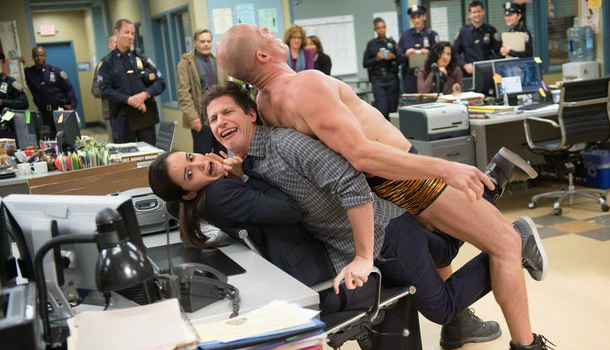 Series creators Daniel Goor and Michael Schur, who previously worked on The Daily Show with Jon Stewart and Saturday Night Live respectively, have conceived a comedy conflicted with outlandish hilarity within a setting of such seriousness; a conflict that sparks success. While the writing of the show is worthy of much acclaim, the success is largely down to the execution of the cast members who play their respective characters flawlessly.

Brooklyn Nine-Nine takes the age-old idea of having a bunch of dysfunctional individuals together in a new environment and delivers something new to our TV screens.

Now despite being a big fan of Andy Samberg (The Lonely Island anyone?), I have to admit I did have some doubts when the show initially started. The opening episodes were a bit slow and I did stop watching for a while.

However, when I got back into it, it was very clear that the second half of this first season did a lot better in achieving what its former half set out to do from the beginning. Episodes like “Operation: Broken Feather” perfectly outline all the characteristics of the precinct’s personalities, as the Captain and Sergeant Terry Jeffords (Terry Crews) attempt to make work more efficient. The chemistry of the cast seemed a lot smoother, and once the characters became more familiar, there was an understanding that each had their own comical individuality that balanced brilliantly. 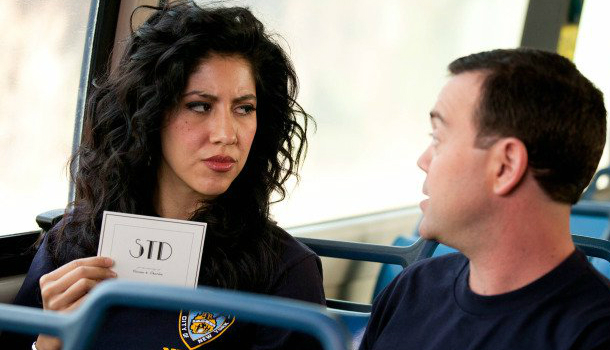 Brooklyn Nine-Nine takes the age-old idea of having a bunch of dysfunctional individuals together in a new environment and delivers something new to our TV screens, which is something to be appreciated.

Last night’s season finale “Charges and Specs” managed to shine a little more light on the cop side of the show without compromising the comedy that we watch it for. Like other workplace sitcoms such as The Office, Nine-Nine never ignores the importance of its setting, despite unraveling more about its employees’ personal lives as we shift between episodes.

“Charges and Specs” had the most compelling case yet, while also leaving enough time to conclude other season arcs, and leave many open for the renewed second season, scheduled for fall of this year. There are of course significant details to discuss, which deserve your viewing enjoyment rather than spoilers here.

With the first season at its end, all we can hope for is that the law of Brooklyn Nine-Nine never gets any order. Cheesy I know, but hey what can you do?