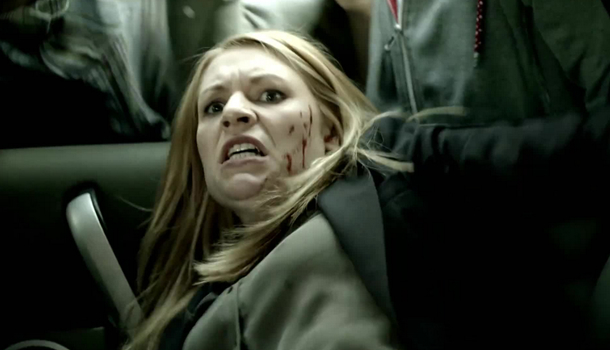 Carrie’s off “happy hunting”, Fara tries to recruit Aayan, and on the home front, Quinn is in an alcoholic tailspin.

This episode, “Shalwar Kameez”, opens with a new sequence of arty credits (sans Brody, of course), with the Middle Eastern imagery indicating the season’s overseas focus. We also had the usual dose of Carrie motifs this episode: pills and wine, listening to jazz music on her iPod and “the smile” when she evades an ISI tail using schoolchildren.

Carrie spends most of the episode asserting her authority in Islamabad and trying to circumvent an embassy lockdown. This gets her off to a rocky start with Martha Boyd, the US ambassador. She seems an interesting character, especially as she “almost got married” to Saul “once” – will this cause more conflicts for Saul and Mira? Good news is that Carrie has brought her own people over, Fara and Max (still no Virgil), to work outside the lockdown and make contact with Aayan. 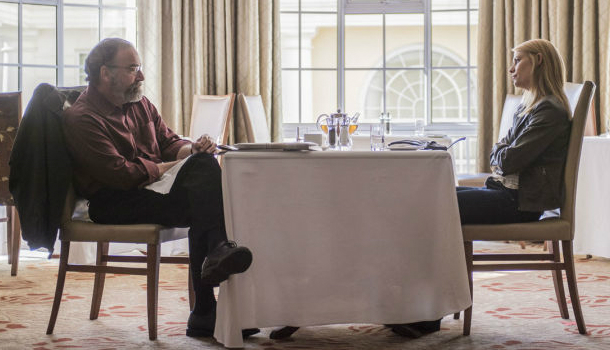 Meanwhile, across the Atlantic, Quinn is drowning his troubles in whisky. In fact, this was really Quinn’s episode. Having psychoanalysed returning servicemen, Homeland now turns to the tortured soul of the Agency assassin. He is “done” with the CIA and “just want[s] out”.

The Jason Bourne storyline is starting to pan out, with Dar Adal saying “once a scalp hunter, always a scalp hunter” (nice bit of John le Carré jargon there) and threatening him with “retraining”. He needs to watch out though, because Quinn has definitely got the Jack Bauer rage issues, i.e. nearly choking someone to death if he doesn’t like what they’re saying.

However, according to Dar Adal, the main issue is Quinn’s “feelings for Carrie”. I feel like I missed a step here. While there was some underlying tension last season, signalled by tense facial closeups of Rupert Friend, I wasn’t aware that everyone else knew about it. Anyway, it was made pretty clear with the final shot of his anguished face.

As it is, things are looking up: Quinn’s heading back to Pakistan, cue more Carrie/Quinn clashes and Carrie looks set to have another complicated relationship with an asset.