France vs Germany: A review, a tribute 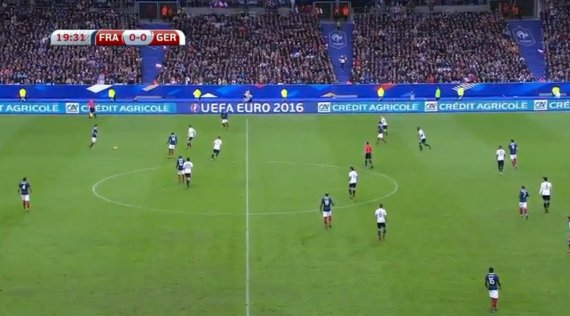 European Championship hosts France produced a fine performance against world champions Germany at the Stade de France friendly on Friday in a night overshadowed by tragic events across the French capital.

Mario Gomez made his first appearance in over a year for the Germans whilst in-form Gunners frontman Olivier Giroud started for Les Bleus.

France went into the game looking to make a statement as the Euro 2016 hosts and held a lot of possession in the early periods with Germany fielding an unproven three-at-the back side.

Paul Pogba went into the game having failed to score in his last six appearances with the national side and came close early on, dragging his shot wide.

The German side sat back with the French holding a lot of the ball waiting to hit their opponents on the break and came close via Thomas Muller and Mario Gomez.

A sensational run down the left hand side by Manchester United new boy Anthony Martial however right before half time opened up Die Mannschaft and provided Giroud with a simple tap in with what proved to be the last kick of the game.

With the uncertainy around Karim Benzema, the Gunners striker timed his goal well following a good first half.

Shalke wonderkid Leroy Sane came on in the second half for his first cap in a Germany shirt and impressed however Paul Pogba continued to dominate in midfield.

Germany looked better in the second half with a more energy and concentration, hitting the post in the 76th minute.

An equaliser never came however as substitute Andre-Pierre Gignac’s bullet header claimed the victory for the French.

Lassana Diarra was handed man of the match after a fine performance, patrolling midfield well and making ten interceptions in the process.

A victory, however, overshadowed by one of the darkest nights in recent history.

Fans of football joined as one, standing on the pitch after the game in fear of leaving the stadium.

Football often divides opinion but on this night, it brought people together amidst the fear in the French capital as panic awaited on the streets of Paris.

“Fans of football joined as one, standing on the pitch after the game in fear of leaving the stadium”

Reports have suggested that the German national team were made to sleep in the stadium with the French players refusing to leave them.

The final score, and even the match itself however, become irrelevant as football unifies in the face of terror.

Impact Sport pays tribute to those who lost their lives in the Paris terror attacks.