Whatever Happened To Reading Festival?

Reading is arguably one of the world’s most famous rock festivals. It is where Nirvana performed their greatest festival set ever in 1992 and proved their worldwide status. It is where The Libertines reformed for the first time in over 8 years back in 2010. Other headliners have included some of the biggest names in rock history such as Oasis, Pulp, Guns n Roses and the Arctic Monkeys. 2016 features Disclosure, Fall Out Boy and the Red Hot Chilli Peppers. Where did it all go wrong?

One of the big talking points surrounding this years line up regards co-headliners. On the face of it they allow for two bands who may not be in the position to take the full spotlight to double up and in turn still provide value for the paying public. This year the festival organisers have decided to have two sets of co-headliners, somewhat downgrading the significance of the headline slot and creating a strong underwhelming feeling. The four ‘co-headliners’ take the form of Foals, Disclosure, Biffy Clyro and Fall Out Boy, four credible bands from varying different genres. Quite clearly organisers have tried to appeal to a range of festival-goers, however, is this really what festival-goers want?

The response to such a question is variable. On one hand, bands such as Foals and Disclosure approach the festival having never headlined an event of this magnitude before. In Foals’ case, many believe that they are worthy of the accolade. Already they have released four critically acclaimed albums, with 2015’s What Went Down arguably being their most impressive album yet. They have followed a path which has seen continuous growth and naturally will only get bigger and better. 2016 has already seen them embark on a European arena tour, as well as frantic sets in the USA including Coachella. Many see Foals as the ideal face of modern British rock music and so for that reason they make a worthy co-headliner.

Much of the discussion and disagreement revolves around Disclosure. Having released only two albums, one being far less critically acclaimed than the other, the Surrey based band have been elevated quite dramatically to headlining status. Of the four, many argue that the duo are the least worthy. Despite this, organisers have taken such risks before. Arctic Monkeys were propelled to a high position in 2006 despite only releasing one album before then. 2015 saw Jake Bugg also perform under similar circumstances. However, neither of those acts took on a co-headlining slot like in Disclosure’s case. Not only that, but they represent a genre which has rarely seen such exposure at a famous ‘rock’ festival until recent years. Though dance music may be for some, you have to wonder whether the decision to ignore the ‘rock’ routes of the festival and elevate Disclosure into such a position was the right one?

It is easy to look past both Biffy Clyro and Fall Out Boy. Once more they are both credible bands with relatively large success. The former played one of the most energetic sets in Reading history back in 2013 and have been given the opportunity to return just three years later. Despite all of this, they still don’t boast the ‘star’ appeal as that which recent headliners such as Metallica, Arctic Monkeys and Foo Fighters have in abundance. But in such a congested festival season, what other options do organisers have? Risk taking has played a central part in the British festival scene this year purely to compensate for the slow growth of European festivals who seemingly have attracted most of the biggest names who happen to be touring this year.

Arguably, the Red Hot Chilli Peppers are the only band of the five with true historic appeal. Headlining on Saturday evening and having formed in 1983, they boast more experience than the other four bands combined. However, do the American rock band have as much credibility now? It is apparent to many that they have spent much of the second part of their career in stagnated decline, dangerously reliant upon past glories. 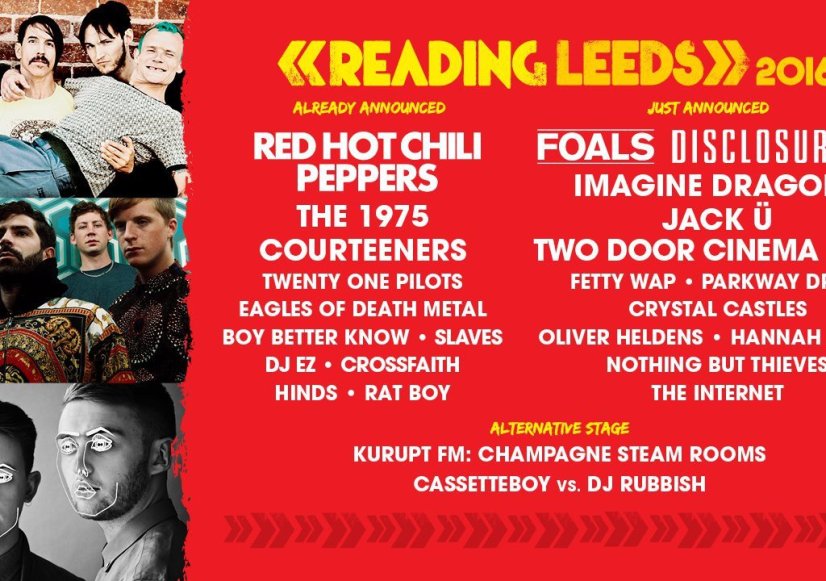 It is somewhat naive to compare this years headliners to past line ups. At this moment they may cause debate and anger, or joy and praise. The situation could be entirely different in years to come and the decision to choose this collective of headliners may be heralded as a great one. When looking back on past line ups we view certain bands through the assumption that they had the same popularity and status then as they do now. Back in 2002, The Strokes had barely released an album and had only toured the UK briefly, now we regard them as one of the greatest bands of the decade. The situation could also be reversed: having The Darkness headline in 2004 looks fairly pathetic just twelve years on. The point being that overall it is somewhat unfair to naively compare this years festival to those of the past.

However, one cannot ignore the critical responses of fans following the headline announcements. Amidst the limited praise for elevating Disclosure and Foals to the top of festival hierarchy, many have expressed disappointment, one of the most striking comments being “even V tops Reading this year”. Yes, the once mighty Reading festival is now held in comparable regards to the corporate sprawl that is V fest.

It is hard to approach a festival preview without it being perceived as naive, especially in this case. Many may also be fans of the aforementioned bands or supportive of the decisions made relating to choosing such headliners and so it is impossible to avoid isolating certain readers. Despite this, it is fair to assume that the festival has taken an entirely different pathway, an unavoidably underwhelming one. With inclusion of new genres, and elevating once modest bands to almost unimaginable heights, only with time will we see whether Reading 2016 will compare to its once iconic roots.

In Defence of the Mass Effect 3 Ending

Co-Editor of the Music Section at University of Nottingham's IMPACT Magazine.
One Comment