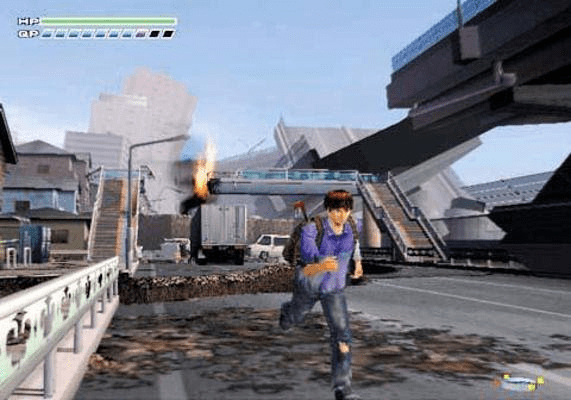 The 2000’s gave rise to a string of disaster movies, which reflected growing environmental concerns in the real world. Yet, for some reason this trend never quite reached the world of gaming. Even as action games started to include survival aspects, such as material collection and item crafting, disaster steadily became a common backdrop of games without being a major focus of the story. An exception to this trend is SOS: The Final Escape, known as Zettai Zetsumei Toshi in Japan, and Disaster Report in USA.

In SOS: The Final Escape (2002), the main characters are just ordinary people who need to drink water, stay warm and regularly rest while trying to find a way out of the disaster-struck city they are stuck in. The game is best known for its memorable characters, and focus on how the disaster affects the citizens of the city in the short-term, compared to games which set their story several years after the occurrence of the disaster.

After a short prologue, I woke up as Keith Helm, an investigative reporter on the way to his first day of work at Capital City when an earthquake struck. With only the barest of survival essentials, I set off to find help, or other survivors, and ultimately find out the story behind the sudden earthquake.

Yet somehow, the biggest obstacle to survival was not the aftershocks or escape sequences. It was the control scheme and the thirst system. Despite being a fully 3D game, SOS: The Final Escape opted out of using the right stick of the DualShock controller at all, leaving L2 as the only way to centre the camera behind Keith.

This led to frustrating moments of trying to change the camera angle as the ground broke beneath my feet. Keith also jumps when holding the Run button (R1) towards a ledge, which means accidental moments of jumping to your death. Finally, the Thirst system, where the protagonist will require drinking water or risk losing health, is cumbersome and unnecessary, as water is quite plentiful everywhere.

“Beneath the clunky systems and controls, SOS: The Final Escape still yet remains a hidden cult classic”

Beneath the clunky systems and controls, SOS: The Final Escape still yet remains a hidden cult classic. Thanks to its premise, I experienced a unique take on survival adventure in a genre that was predominantly horror based, and had tonnes of a political thriller.

I met and bonded with several other survivors, including the charming college student Karen Morris, the pragmatic reporter Greg Bach, and the energetic teenager Kelly Austin, who all had their lives disrupted by the disaster.

Besides the characters and story, there is also the scale of the disaster attempted on the PS2;l as the ground shakes and you are forced to crouch to stabilise yourself, you will see buildings break apart on top of you, frequently falling towards the player, causing me to wince in terror quite a lot.

Capital City is full of set pieces and ends with the characters trying to out-climb a tsunami, as water engulfs the entire city. It is an unforgettable experience.

Sadly, the first two games in the series are rare PS2 gems and the third, for PSP, was not localised. Interested importers should however pay attention to the fourth game, Zettai Zetsumei Toshi 4+ which has been announced for PS4.

A freshers’ guide to Sport in Nottingham