When we think of film noir, we reflect on Hollywood’s crime mysteries from the 1940s such as Citizen Kane and The Third Man. However, this enigmatic genre that originates from German Expressionist Cinematography has never left Hollywood, it has only evolved throughout the decades.

Film Noir’s main elements revolve around its location, usually in a city or neighbourhood. The director will then compound these claustrophobic surroundings with a profusion of rain juxtaposed against dimly lit interior scenes. He/she will then plant a protagonist with a moral ambiguity – an anti-hero, to increase the mood of pessimism and gloominess. Every technique here stems from chiaroscuro (contrasting light and darkness).

By comparing two masterpieces fifty years apart in Alfred Hitchcock’s Rear Window and Christopher Nolan’s The Dark Knight, we witness the development of film noir from the 50s to the 21st century.

As soon as I saw the opening sequence of Rear Window, I knew I was watching a world-class filmmaker with a vision. Alfred Hitchcock may indeed be the greatest of them all when it comes to noir. From the very first couple of minutes, in just a few brief but wondrous shots, he swiftly establishes his characters’ personalities, motives and conflicts. Right after this we are intimately familiar with the neighbourhood. It is effortless storytelling – he makes it look that easy.

“I can’t help but think Hitchcock has tapped into a concept unknown to film, yet obvious to life: humans are voyeurs by nature.”

The protagonist in Rear Window is Jeff, portrayed by James Stewart, seemingly a renowned photographer who has decided to donate his long, unending weeks spying on his neighbours as he’s stuck in a wheelchair due to a broken leg. Jeff is no hero, no civil servant – he is just another noisy neighbour. The only people who visit his apartment are his nurse and stylish fiancée (Grace Kelly).

Jeff’s neighbours range from Miss Lonelyhearts who every night throws dinner parties for imaginary men to Thorvald – an elderly man whose wife lies in bed all day, depressing him. The trick here is these are all everyday people we meet and see from day-to-day life. However, something beneath their normality does not seem right and the prying Jeff suspects a murder. 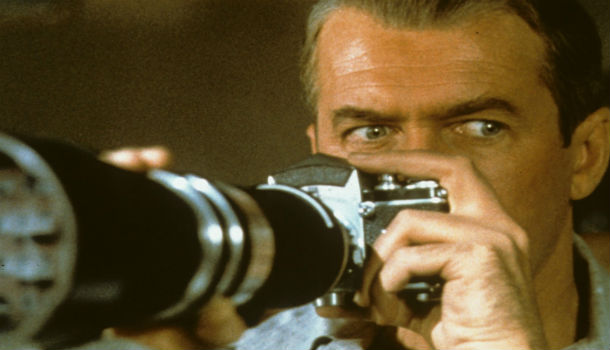 Jeff, portrayed by James Stewart in The Rear Window

There are so many layers to this masterpiece it is very difficult to summarise. Like a volatile scientific experimenter, Hitchcock toys with the audience effortlessly by capsizing the screen on us. Everything Jeff sees, we see and whatever ending from the situation he draws, we draw. This is because the entire neighbourhood is seen through the perspective of his telescope – we are Jeff.

Every neighbour has a given genre in the film, such as Thorvald – mystery, Miss Torso – romanticism, the old couple and dog – comedy and the recently married couple – drama. As Jeff gazes at these various life forms and we, the audience in turn intently watch him – I can’t help but think Hitchcock has tapped into a concept unknown to film, yet obvious to life: humans are voyeurs by nature. So, as we spy on the ever-controlled classy Stewart and then him on his neighbours, we would do well to contemplate the originality of Hitchcock’s masterwork.

My favourite shot of Christopher Nolan’s Batman Begins sequel is the moment Heath Ledger’s Joker, leaning out of the window of a stolen police car, lets out his iconic wicked laugh, whilst in the background Gotham’s tinted lights glisten like jewellery. For me, that image summarises this ruinous twisted masterpiece. Minutes beforehand the malevolent sadist pointed out to the city’s so-called hero: “You’re just a freak, like me.”

The Joker doesn’t fight his freakishness like Batman, he embraces it. The Dark Knight is a tale of two chess players both distorted by childhood brutality – one compensating with good deeds, the other with bad. We watch attentive, in anticipation of the clash between these good and evil forces, but Nolan instead lets them get it on and dance. 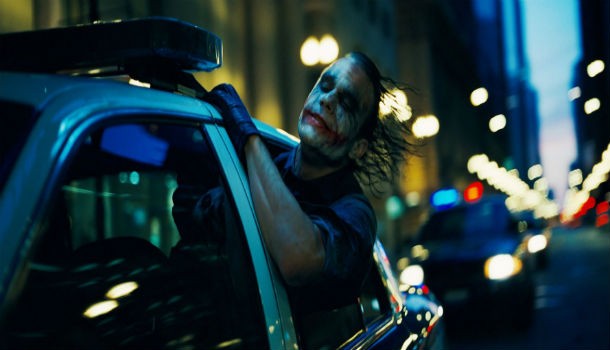 “For me, that image summarises this ruinous twisted masterpiece.”

The Dark Knight has the authentic touch of a dazzling crime epic with origins in noir. Nolan goes further and further into the untouched regions of this elusive, brooding figure’s dark soul. With debate raging as to whether he is a conqueror or menace, Wayne barely mutters a word, not even a single, typical superhero one liner is presented to the audience. He merely roosts over his dying city – he is more gargoyle-like than protector. There is something glossier and livelier about Gotham in this film compared to its predecessor’s obsolescent dystopia, however, underneath the wilderness of skyscrapers, there remains an ominous darkness waiting to engulf and destroy everything.

“We have found the 21st century answer to Hitchcock; Nolan is an uncompromising showman who constantly goes to deeper and darker lengths to play with fire.”

Nolan’s joker card is, well, his Joker. With his shoulder-stooping posture, dilapidated green hair and scarred face caked in mouldy makeup, we watch the frenzied offspring of A Clockwork Orange’s Alex McDowell. Tragically, it was the twenty-eight-year-old Ledger’s final completed movie for which he won a posthumous Academy Award: he makes the great Jack Nicholson’s Joker look like a clown and only a clown.

He fashions a ghastly creature who is so spine-chilling, visceral and psychologically engaging, that to this day audiences have never let his riveting depiction go. Ledger makes us genuinely believe that this nefarious criminal wants ‘to watch the world burn;’ though I think the pure genius of Ledger’s performance is that we want him to burn it down also.

We have found the 21st-century answer to Hitchcock; Nolan is an uncompromising showman who constantly goes to deeper and darker lengths to play with fire. From transforming standard superhero battle scenes to something more obscure with a greater significance, to portraying a more nuanced rationale on the confrontation with terrorism than various contemporary politicians, Christopher Nolan is a rock star – he has no boundaries. He has made a motion picture so formidable and entertaining that its only flaw is the plague of poor superhero movies that have followed it. There is a disgustingly beautiful irony in there somewhere.

Alfred Hitchcock and Christopher Nolan have numerous similarities that cause comparison, however, I firmly believe that their sinister and self-serious nature is the primary association we can make. They do not pursue the laughs and praise from the typical moviegoer; they instead self-interestedly hunt the dark arts and play with expectations. Rear Window and The Dark Knight are merely one pair from an unending link of noir films between the two, however recently we have started to witness a deviation by Nolan towards the Sci-Fi genre with Interstellar and Inception and the upcoming war epic Dunkirk.

Do not be fooled, though; Nolan may pretend to rein in his demons but he cannot stop the gravitational pull towards the shadows of noir. He will pick greatness over the cash-swamping blockbusters every time. Equally, during the 60s, once cinema audiences became fed up with the exclusively of Hitchcock films in the noir genre, he had a choice: start producing unoriginal money-grossing flicks or leave Hollywood.

Of course, the lure of his beloved noir was too much and he chose the latter. Both of these visionaries illogically do not hold an Oscar, but do they care? They are too deep in the quicksand of noir to even look up.

Veganism on a budget!