Lauren once again charms us with a delightful christmas-themed short story. 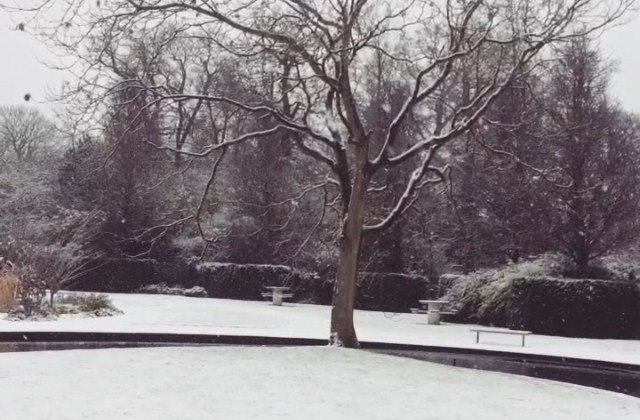 Snowflakes clung to the windowpane like icing frosted upon a gingerbread house. With a start, Eleanor’s unfocused gaze took in the room around her: bench after bench of hard-working elves hand crafting this year’s presents. No time for slowing down. In her hands was another of the ragdolls, her own winning design. Yet the stitches had slipped in her lapse of attention, and the left eye hung at an irregular angle. Now the sweetly symmetrical features weren’t aligned, giving the doll a demented look. That would never do. How could she be so careless?

Eleanor unpicked the stitches, catching her finger with the needle in the process. Wincing, she blinked back tears that threatened to fall as rapidly as the drops of blood on her finger. Upbeat festive music blared from overhead speakers- kept up cheer and provided a rhythm to work to. The tunes only pounded in her ears alongside her heartbeat. Her breath too, seemed wound up in her chest, just like the jack in a box an aisle over. The grotto, always kept at an optimal temperature reminiscent of a warmed-up fireplace, was far too hot. She tried to imagine how cool the snow would feel against her flushed skin. But there was no time to daydream.

She stitched up the ragdoll, then another and another, trying her hardest to remain focused on the task at hand. Once upon a time, simply the thought of those delighted faces come Christmas day kept the toys flowing through Eleanor’s hands. Upon the wall hung stars for each employee of the month- her name on every star since beginning the internship in September. The grotto hadn’t had such a hard-worker in years, even amongst the top candidates. Carry this on and you’ll work your way up in no time, she’d been told. Rumour had it Mr. Claus himself had been made aware of her name. And now she was lagging, crying over nothing, unable to perceive the joy her dream job had promised. All around, other elves worked diligently, laughing and singing along whilst packing presents. These bright-eyed faces beneath felt hats were ones she’d known for months, yet they were unrecognisable, and Eleanor felt as though she were completely alone.

All too soon the clock struck five, and Eleanor still hadn’t completed enough of the ragdolls. She stuffed a few into her holly coloured satchel. The back door wasn’t too far from her station, but just as she grasped the handle, someone called her name. Eleanor turned to find a gaggle of elves, all rosy cheeked and beaming at her.

“Want to come carol singing with us tonight?” Sally, one of the girls Eleanor used to chat to, asked. “We’ve not seen you in ages.”

Eleanor hesitated. Back in the snowless woodlands of her home, she’d been part of a choir. First Soprano. That’d had really impressed the judges during her interview. But her head was still pounding, and there were too many people to face if she went out singing. Her notes would probably come out as dulled and deflated as she felt.

“I’m not sure guys. I don’t feel that great, got a bit of a sore throat. Time of year, I guess,” Eleanor said, trying her best to mimic Sally’s cheerful chatter.

“How about trying the ice rink? The promenade’s all frozen over, it’ll be amazing!” Another elf offered, though Eleanor had begun to move away, shaking her head. Didn’t they see? She knew that they didn’t deserve to have her around, bringing them down.

Hurrying out of the door, Eleanor took a right, and walked as fast as she could. On the other side of the grotto was the promenade and festive fair. The sound of instruments mingled with mirth and footfall followed her, growing fainter and fainter. Every street and house glimmered with rows of multicoloured lighting. A chill nipped in through her uniform, and she shivered, but carried on until the houses were out of sight.

Eventually, Eleanor found her way into the woodlands. All noise had vanished, as if the dense carpet of snow were also a vacuum. Only the bright moon to guide her way as she trudged deeper and deeper into the woods. Quite where the boundary of Toyland ended, she was unsure. All Eleanor wanted was somewhere isolated. The snow-heavy, silent surrounding of trees was as far from the festivities as she could wish for. A flurry of snowflakes began to land on her hat, melting onto the tip of her nose, shoes already coated in slush. In the moonlight, the translucent flakes fell like glitter. She could hardly feel the cold now, transfixed, following the descent of individual snowflakes until they vanished upon the ground.

One of the snowflakes looked different, however. It shone with more intensity than all the rest, a golden glow in the crisp silver glow from the moon. The snowflake seemed to grow larger too, as it came closer. Yet Eleanor couldn’t move, as though every limb were cast in ice. There was no energy left in her bones.

“Hey, you! What you doing way out here Elle?” The golden light fluttered before her eyes, revealing itself to be the intricate sequins of a dress, perfectly proportioned for its fairy owner.

“I just need some space, Flo,” Eleanor said, though some small part of her was glad to no longer be alone in the darkening woods.

Suddenly, the light flashed, and a golden-dressed, copper haired woman appeared by Eleanor’s side.

“Sorry, still getting used to the whole changing sizes,” Flo said, her gossamer wings unfurling from the back of her dress. “You know, I come here too. I wouldn’t have found you otherwise. Sometimes it all gets a bit much in Toyland town. As you said, I need some space to clear my head. The stillness here helps me slow down, get out of that panicky state.”

Eleanor stared at Flo, who didn’t have a single hair out of place, her braid embroidered with ivy and flowers. The glittery, stunning fairy who had been her mentor, insisting on keeping in touch even after Eleanor had swiftly learnt the ropes. Despite their height differences and separate occupations, the pair shared an interest in singing, so Flo always found a way of visiting Eleanor. But to Eleanor, Flo was the incredible guide, one of Mr. Claus’s top secretaries, so bubbly and sure of herself. Everything Eleanor dreamt of becoming. Without those employee of the month stars and accolades to prove herself, what was she? Just another elf.

“You okay Elle? You haven’t been yourself recently.”

“I don’t know…” Eleanor began, unable to quite find the right words. But if the seemingly confident Flo also needed to clear her head, maybe she’d understand the disconcerting emotions that had been troubling Eleanor.

“It’s like everyone here is a bulb in a chain of lights. Everyone needs to glow for the lights to shine. Only I’m that one bulb that’s blown and can’t light up. I’m scared that I’m letting everyone else down. I don’t understand why the other elves want to spend time with me, when I’m so empty inside, as if Christmas cheer doesn’t exist anymore.”

“No way, you’re one of the brightest stars! And I don’t meant those employee targets! You do so much for everyone Elle. That’s why we care, because you’re hard working and thoughtful. But you’re putting yourself under too much pressure. Take a night off, and no sewing extra ragdolls all night long!” Flo said, tapping a finger on the satchel, which vanished.

“Not tonight,” Flo reached out and took Eleanor’s hands. Merely a gesture, yet their connected hands formed a lifeline, a bridge to cross over the isolation. Though the snow kept falling, Eleanor felt herself thawing, slowly.  “You’re coming back to mine. I’ve composed a new song, and you’ll be the first to hear it. There’s a soprano part with chords dying to harmonise to that voice of yours. And I’ll make you hot chocolate? You know I make the best hot chocolate.”

She couldn’t help but muster a smile at that, and Flo smiled back. “I knew the old Eleanor was still in there. Let’s go. This is no night to be alone.”

With a flutter of her wings, Flo became a golden dot once more, a fluttering lamplight for Eleanor to follow out of the forest. Around them, the snow glistened, as cool upon her skin as Eleanor had imagined. But not enough to extinguish the glow that Flo’s hands had passed onto her own, a shimmer to banish away the darkness.

Bring It On: flipping gender stereotypes on their head