Gaming Signposts: What to Watch Out for if You Want to Live

Georgia highlights the gaming hints that a big boss is coming up...

As long as I can remember, I’ve been a gamer, and with so many years of experience, I’ve started to notice a few signposts… not literal signposts of course, but small, sometimes discrete signals that tell you ‘hey, something BAD is going to happen soon. Have fun!’

This has happened to me many, many, times, and every time, I’ve had a feeling of dread… A sudden influx of health potions is one such signal, or a very large, conveniently open space is another, both of which imply some form of horrendous, disgusting boss battle is about to happen.

I encountered these exact signals last month when I played Horizon Zero Dawn. This game is absolutely beautiful, and if you haven’t played it you should. It is visually stunning, has wonderful mechanics, and amazing monsters that in no way made me want to tear my hair out and throw my controller out of the window.

Now, at the point at which I started to see these sign posts, I had already killed a good few bosses, and so the feeling of ‘I have already mastered this game’ had started to settle in. I was over-confident, and sure I could handle anything. So when I found multiple health potions, it didn’t bother me. Game needs to give you some health potions every now and then, right? But then they gave me more. And some more. Before long my health potions pouch was full, as was my medicinal herb pouch, and yet the game was still offering me more at every turn. This is when the alarm bells starting ringing inside my head… but, 20 minutes later, I’d still not encountered a boss.

With a simple swift cutscene, I watched my character be promptly knocked out, and then awake in a very different, and very ‘this is totally a boss battle arena’ situation.

To picture the scene, I awoke in a suspended cage, above a very large, and very open, arena, with the main antagonist stood in front of me, doing his typical ‘hey I’m the villain, and this is my backstory and evil plan’ speech. Over the course of this speech, I hear key phrases such as ‘sacrifice you’, ‘destiny’ and other key villain tells which further emphasise the ‘big fight time’ vibe that I’m getting at this point. Sure enough, soon after he’s done being a stereotypical villain, another cutscene starts, the ominous music begins, and an overly large (incredibly terrifying) machine, is released into the pit below me.

Unsurprisingly, the long-awaited boss fight then finally began, and if any of you have played Horizon Zero Dawn, you’ll know the fight I’m talking about, and how it’s an absolute pain. Especially considering you start the fight without any of your equipment, but hey, boss fights, right? 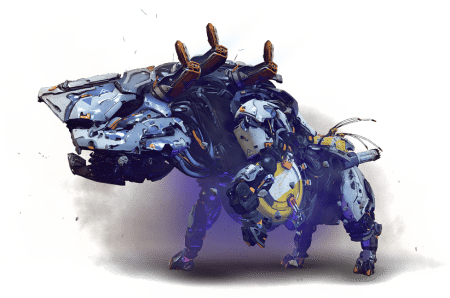 Ready for your boss battle? Fight this Behemoth…

Thankfully, I’d recognised the signs and had been sure to stock up before hand, but even so, it was a tough fight. Ultimately, games like to tell you when bad things are going to happen, but it’s up to you to spot them. So, when you next play a game, make sure you watch out for a sudden potion influx, dramatic music changes (especially if they’re preceded by an ominous silence…), and larger than necessary open spaces if you want to be prepared for your next boss fight.

Look Out For… February

How Bon Iver Changed My Life