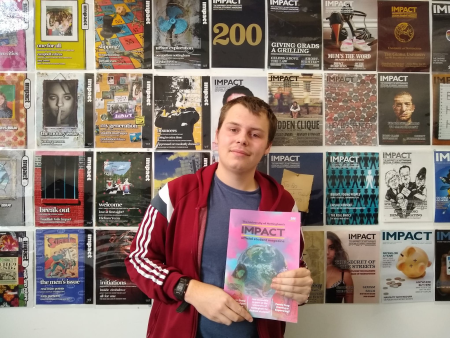 Lee Taylor has been elected as your new Students’ Union Environmental and Social Justice Officer for 2019/20.

Lee stated he felt ‘very overwhelmed’ saying he was happy with the people he had been running against. He stated, ‘we will definitely work together next year.’

‘My highlight of the campaign process was making friends with the other campaigners.’  He is overwhelmed by the amount of support he has had.

For Lee, the most challenging part of the campaign was ‘approaching people,’ as well as having a paperless campaign. Lee was the only candidate doing this, which he found difficult.

Lee said he was having an early night. However, tomorrow he is helping out with the girls only campus run as part of girls night in. He is going for a cycle in the evening.

The manifesto point Lee is most excited about is creating more visibility and partners to ‘create a stronger ESJ network.’