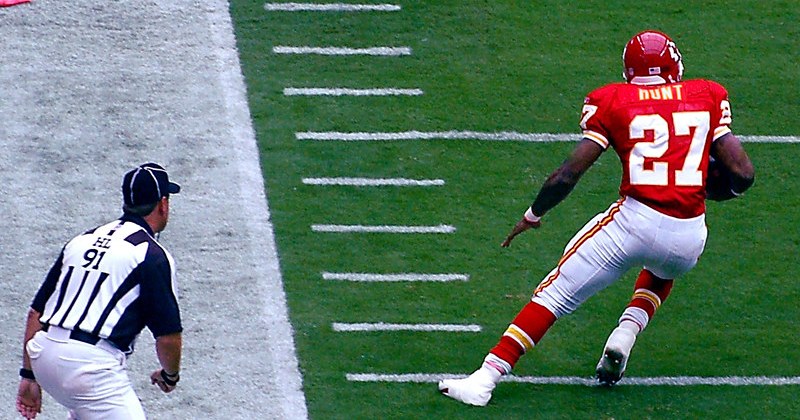 Footage of Chiefs star Kareem Hunt, 23, went viral Friday evening as he is seen in a physical altercation with a woman at a Cleveland hotel. Although the incident initially took place in February, the shocking video circulated after TMZ shared it to their website.

Shortly afterwards, the Kansas City Chiefs were quick to release their former star. In an official statement from the team, Kansas City revealed that their Pro Bowl running back and reigning NFL rushing leader would be released ‘immediately’. The NFL itself reacted by placing the now free agent, Hunt, on the commissioner’s ‘exempt’ list, meaning that even if he does find a new team, he will be prevented from playing or practising with any other team, or be present at any team’s training facility, until the investigation is over.

Domestic violence is becoming a recurring issue for the NFL, with several controversial events in recent years provoking public outcry at the League’s handling of these issues. Here are some examples of recent controversies. Back in September 2014, former Ravens running back, Ray Rice, was cut by the Ravens after a video went viral of Rice, then 27, ferociously punching his then fiancé, Janay Palmer, whom he later married. The former bell cow has been without a team since.

Despite the eventual outcome of the Rice incident, which took place in Atlantic City, the league was heavily scrutinised for their inability to react sooner, denying having seen the footage before it was released publicly.

Rice – addressing the media this weekend in an exclusive interview with NFL.com – acknowledged that ‘obviously you see some similarities between what happened in my situation’, and the current one regarding Kareem Hunt. The former Ravens bruiser stressed the importance of ‘remorse’ in incidents of domestic violence, while referring to this as a ‘teaching tool’ for men who impulsively commit these despicable acts. The regularity of such incidents within the NFL is no less absurd than it is disturbing.

More disturbing still, Bengals running back Joe Mixon was drafted by the Cincinnati Bengals back in 2017, despite being caught on video striking a fellow student at Oklahoma University. It has become increasingly apparent that NFL owners and general managers will overlook such instances if the player has enough upside.

In a similar fashion, Redskins star Adrian Peterson is still playing in spite of an abhorrent child assault scandal in 2014, where he resorted to beating his own child with a switch in the name of ‘discipline’.

NFL fans await the fate of the former Chief, who was an integral part of the high flying Kansas City outfit, who at 9-2 have been a popular pick by many to represent the AFC in the Super Bowl. Hunt, an explosive weapon on their offence, was on course to break 1000 yards rushing for a second straight season, averaging an impressive 4.6 yards per carry.

This is an unfortunate and frankly disappointing end to Hunt’s two year stint in Kansas City. However, former teammate Tyreek Hill was also involved in an abominable incident whilst at university at Oklahoma state. The unsettling details involve the current star wideout hitting and choking his then pregnant partner, resulting in the disgraced receiver being kicked off the team. The very same Kansas City Chiefs – having understood the situation – nonetheless decided to select Hill in the fifth round of the 2016 NFL draft.

Hill, who was a teammate of Kareem Hunt over the past two seasons, will be all too familiar with the public scrutiny one might face in the wake of such an incident. But despite being booed by Chiefs fans in his rookie season, his electrifying performances on the field have led fans to forget.

When the name ‘Tyreek Hill’ is mentioned, fans will likely think of his blistering – sprinter speed – pace, given Hill’s history of competing as a track athlete. They will think of the unbelievable year he is having at the heart of Andy Reid’s offence, in which he already has over 1100 yards receiving and 11 touchdowns. They won’t think of, or even perhaps know about, this shameful incident which caused the highly rated wide receiver to drop from the first to the fifth round of the draft. Now regarded as one of the NFL’s finest receivers, his troubled past is overlooked. This is the harsh reality of the business.

So why did Kansas City and general manager Brett Veach handle these two similar scenarios so differently?

From the aforementioned case studies in this article, one deciding factor in the players’ outcomes appears to be the timing of the incidents. Ray Rice, a declining running back who had endured a frustrating 2013 season, was dispensable. By contrast, both Joe Mixon and Tyreek Hill were at college when their respective incidents took place, giving fans and the general public time to forget.

Perhaps, though, the Chiefs’ dealing of Kareem Hunt’s off field troubles could be a turning point in how the NFL treats domestic violence cases involving it’s players. The Chiefs were eager to point out that although they had been informed of the incident earlier, Kareem Hunt had in fact lied to the organisation about the nature of incident. So, this wasn’t just a case of the Missouri-based franchise wanting to keep the details of the situation under wraps – allegedly, they had been lied to.

In what has been a maelstrom of public backlash over the last couple of days, the NFL faces yet another test in its ongoing battle with the issue of domestic violence. It’s stance has been an inconsistent one to say the least. This past week, we have seen the 49ers release troubled linebacker Reuben Foster after yet another accusation of domestic violence, only for him to be signed off waivers by the Washington Redskins days later. This follows an accusation by the same woman who accused the Alabama product of assault earlier in the year. Will we see something similar with Kareem Hunt, another promising young player who would otherwise have a successful NFL career ahead of him?

Ultimately, it is likely that Hunt will find another team, and will probably be reinstated to the league at some point. It has already been rumoured that defending Super Bowl champions – the Philadelphia Eagles – are interested in the bell-cow to bolster their depleted backfield. But if this is the end for Hunt, he will serve as an example to future athletes that off field incidents such as these will not be tolerated anymore.

But the truth of the matter is – as has also been confirmed by the Reuben Foster domestic violence incident last week – that NFL teams, and general managers, only care about talent. The NFL is an unforgiving, money-driven business, and on numerous occasions we have seen players continue to be offered opportunities in the league because of their on field-performance, regardless of their off field demeanour.

Not Playing the Game