A court-side tour de force and sporting sweetheart, it is difficult to see the life of Basketball kingpin Kobe Bryant as anything short of glittering, but in light of his recent tragic death, Olivia delves into the more turbulent margins of his legacy.

“It’s time for the sledgehammer to come out. The man was a rapist. Deal with it”. The blunt words of an indignant Abigail Disney, granddaughter of a co-founder of the Walt Disney Company, appeared as scathing as they were surprising in an aggrieved Twitter thread following the recent death of NBA basketball star Kobe Bryant. Along with his daughter Gianna, herself a promising basketball player, Bryant was on his way to the Mamba Academy for weekly practice when turbulent weather brought down their helicopter. As one of the NBA’s most prominent figures, a two-time olympic medalist and global sporting caballero, Bryant’s death elicited a monumental outcry of public grief as thousands took to social media to pay homage to a seemingly untouchable icon. Amid such pained messages of sorrow and regret, however, the Disney heiress noted the absence of discussion surrounding the basketball heavyweights less shiny stint – a period of intense sexual allegations and court cases in which Bryant was accused of raping a nineteen-year-old.

As The New York Times reported, the allegations regard Bryant’s 2003 trip to Colorado for an operation on his knee. Here, Bryant reportedly asked a concierge at the spa where he was staying for a private tour before inviting her to his room where they began kissing. Bryant had said what followed was consensual sex, though his accuser said she was raped. Court documents revealed the woman had bruises on her neck and tears on her vaginal wall, the publication reported, and while the case never went to trial, reportedly over the accusers’ refusal to testify, a lawsuit between Bryant and the accuser eventually resulted in an undisclosed settlement. Bryant later apologised to his accuser, saying that “although I truly believe this encounter between us was consensual, I recognize now that she did not and does not view this incident the same way I did”.

“Breaking: bored heiress of a multimedia empire has nothing better to do on a Wednesday because her life is completely empty & meaningless”

“OK, time to bite the bullet and say something”, Disney said when she began her Twitter thread early last Saturday morning; an opening statement that says something in itself about the taboo nature of discussions about sexual abuse allegations in the modern age, and especially those regarding the famous or elite. “I’m a woman who has herself been assaulted and spent my life knowing, loving and feeling for women for whom it’s been so much worse”, she told users, before going on to discuss her anguish at the “sainthood” Bryant was bestowed throughout his life despite being accused of the kind of deeds that continue to haunt her and so many others.

In a metaphor that compared the allegations to a drunk driver killing a person, Disney asked “does [Bryant’s] lack of intention absolve him of responsibility for the death?”. Her dialogue was met with a terrifying barrage of rebuttals, renunciations and alibi’s as many pointed to Bryant’s close relationship with the women in his life, including his four daughters, as well as wife Vanessa, to whom he had been married since she was in high school, to refute the young woman’s allegations. “Breaking: bored heiress of a multimedia empire has nothing better to do on a Wednesday because her life is completely empty & meaningless”, one Twitter user said in a reply that was retweeted more than 120 times. Failing to miss the point, however, that the only thing truly being reduced to “empty & meaningless” by the suppression of Bryant’s actions is the harrowing experiences of sexual abuse victims universally. Others however stood in fervent solidarity with Disney; “what a thoughtful thread,” one person tweeted. “Thank you for writing it. I have seen the way that fierce emotional identification and defense of abusive behaviour can happen with sports figures”.

The tension in the public sphere over how to talk about the rape case was also demonstrated by the recent suspension of Washington Post reporter Felicia Sonmez. Having also been public with her own story of being a victim of sexual assault, Sonmez tweeted out, without comment, a Daily Beast story from 2016 that laid out the disturbing history of the case. The act was met by her swift suspension from the publication and a similar onslaught of misogynistic harassment in which many argued that it was “too soon” to talk about the rape case, and that the grief of Bryant’s fans and family should be honoured. In turn, however, such an argument belittles the grief experienced by sexual abuse survivors when their suffering is erased from history, and perpetuates the narrative that the experiences of such victims, and more statistically often those of women, must be suppressed to protect the legacy of a male elite. Though the DC newspaper would later revoke its decision to suspend the reporter, saying her tweets did not violate WaPo policy, they still stated that her tweets were “ill-timed”; a multinational media publications censoring of a woman for tweeting about a rape case sending a chilling message about female autonomy and sexual politics in the contemporary age. The Kobe Bryant rape case is therefore painful not only because of what it says about him, but also in what it says about us; offering a dark and distressing insight into the stifled secrets of societies tumultuous relationship with gender, sex, violence, and power. 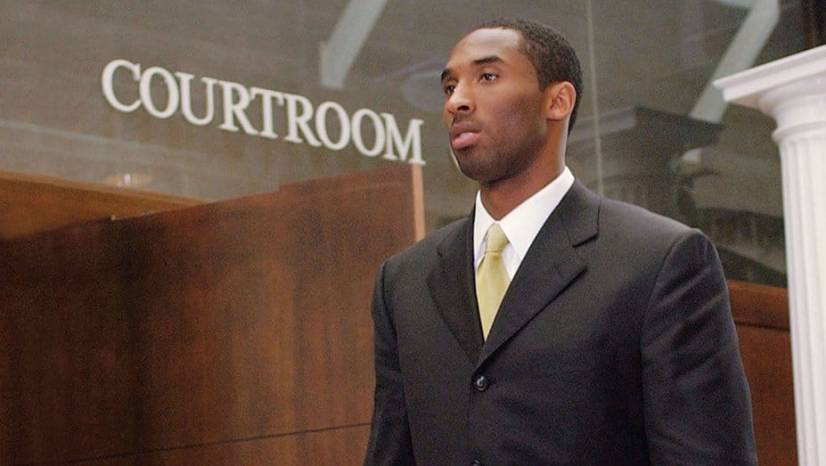 Kicking off the decade that changed how we talk about sexual abuse, Bryant’s was just one of an alarming number of high-status rape cases that unfolded during the noughties. Many of which were woven with a similar misogynistic strand, and helped catapult the global #MeToo movement; born of a phrase first coined by sexual harassment survivor and activist Tarana Burke in 2006. From grassroots to ground-breaking, the movement has grown into a global community of survivors from all walks of life with a unanimous goal to disrupt the systems that allow for the global proliferation of sexual violence. As the disgraced film producer Harvey Weinstein is currently on trial in New York for sexual misconduct allegations, the renewed interest in Bryant’s case has raised questions about how much has actually changed since 2003. “If something like that had happened in this time, with this movement going on, the repercussions would have been far greater for him than losing a few endorsements,” said Miki Turner, a journalism professor at the University of Southern California. She first met Bryant as a beat reporter covering the city’s Lakers and Clippers basketball teams, and points out that whilst the #MeToo movement has changed how many people view sexual misconduct allegations, the culture in professional sports is still a male-centric, “good ole boys network”.

Disney points out Kobe’s place in perpetuating this outdated narrative in his relative silence following the Colorado case: “if he had gone on to acknowledge what he’d done”, she wrote, “if he had gone on to actively promote awareness among the millions of young men and women who would come to admire him, if he had, from time to time, resisted his own deification, it would have been different”. An ongoing commitment to different forms of social justice throughout the rest of his career and life, however, allowed Bryant to substantially rebuild his moral and athletic reputation in the eyes of those to whom it had been shattered. Bryant articulated his own shift in character by crafting the “Black Mamba” alter ego after the case. “Creating an alternate persona”, wrote the Washington Post, “was the only way he could mentally move beyond the events of Colorado”. The following years saw the emergence of a resilient competitor as passionate about philanthropy as he was about pursuing baskets or championship rings; with Bryant becoming the official ambassador for children’s charity, After-School All-Stars, which provided after-school programs to 72,000 inner-city kids in need, as well as funding Mamba FC, a youth soccer club that teaches young athletes to become leaders and independent thinkers through sports.

The intentions of Disney and Sonmez’s online outbursts were therefore not to diminish Bryant’s positive affirmative actions or call for his social and athletic reprimand, but to instead use the event as a springboard for discussion upon the somewhat backward approach to sexual abuse allegations in mainstream Western thought. “I mourn Kobe too,” Disney wrote, “he went on to be a man who seemed genuinely to want to do good. The [fact] that he raped someone does not change any of these other facts”. However, his actions should still serve as a reminder of a troubled period, as well as an ongoing troubled social discussion upon the deitising of the social elite and cultural oppression of the experiences of sexual violence victims. And so in Disney’s words, “yes, we should mourn him” – “we should mourn his daughter and his family and all the other lives lost on the helicopter. It was horrible”. But she pleads in an emotional conclusion: “don’t deify him because he was not a god”.

How Does TV and Social Media Influence Our Style?