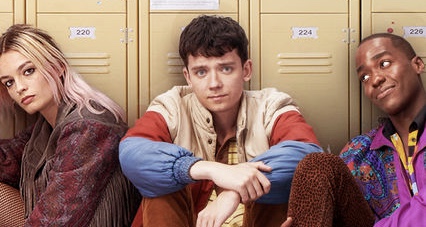 The new series of Sex Education was released on Netflix on the 17th January and it definitely did not disappoint. It tackles a wide range of topics – sexual assault trauma, a-sexuality, female empowerment, uncertainty of one’s own sexuality, and ultimately accepting yourself.

The show plays into the last seasons tropes, with Otis still not losing his virginity and being in a relationship with Ola, simply to distract himself of the fact he is still in love with Maeve. Otis’ mother is even more embarrassing than he viewed her in Season One – she now works at the school, giving advice and stealing his business.

The show still has that John Hughes style in its light-hearted addressing of serious topics. Adam, after being sent away to a military camp by his father, headmaster of the school, is still forcing himself to believe he only likes women. Despite having shared romantic relations with Eric, he still forces himself to believe he is straight because of societal pressure. However, his story is perhaps the most interesting. He is ashamed to be seen with Eric, because he is not comfortable in his sexuality, whereas Eric has a new love interest, Rahim, who is openly gay and proud. The notion of accepting your sexuality and being comfortable in who you are is so vital to young people and this show could help those conflicted, to accept and love themselves.

“It explores, through Jackson, the idea of both parental pressure for extra-curricular activities, and the struggles of lesbian parents”

The sheer breadth of topics the show covers is outstanding – and there is even more than the first series. It explores, through Jackson, the idea of both parental pressure for extra-curricular activities, and the struggles of lesbian parents. Their relationship also opens up the conversation of the intense parental pressure put on children, showing the audience talking and telling your parents how you really feel is always the right thing to do.

Maeve’s complex relationship with her mother is also explored further. She returns to live with Maeve with her younger sister, and all seems well. However, things soon become complicated. This part of the show was not addressed in a light-hearted way. It was important for a topic as serious as addiction to be highlighted with a lack of humour. I respect the directors for approaching this topic with severity and seriousness in order to communicate how real it is – and how it breaks families up every day.

One critique of the show would be its setting as it is still unclear – the costume seems to be 80’s style, yet the dialogue and use of social media places it around 2019. There is nothing that makes it explicitly British, although the actors are British. Yet there is little to suggest it is explicitly American either. Although, there does seem to be an American trope of ‘cliqueiness’ within the high school.

“One critique of the show would be its setting”

All in all, the show is very empowering. With its predominantly young audience, the exploration of sexuality and opening up of conversations may help many young children learn to accept themselves and perhaps feel less alone.