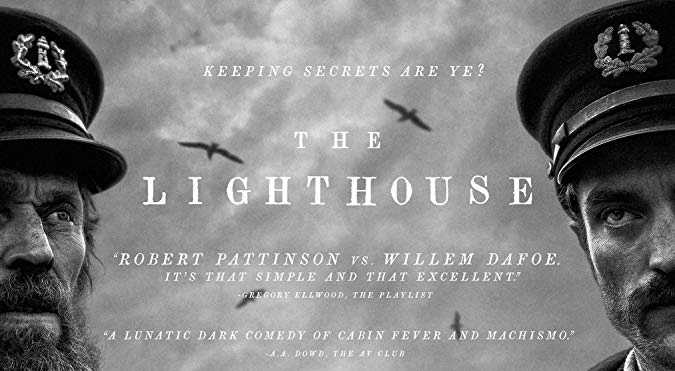 Towards the end of the 19th Century, an ageing lighthouse keeper (Willem Dafoe) is joined by a rookie ‘wickie’ (Robert Pattinson) on a remote island. As their contract drags on, the two men struggle with each-other, their own sanity, and possibly forces beyond their comprehension.

With films such as Under the Skin (2014) and Hereditary (2018), production company A24 has been building a reputation as not only a producer of acclaimed indie dramas but of surreal and often excellent horrors.

In 2015, The Witch (8/10) directed by Robert Eggers (in his feature film debut) was released and stood out as one of the more interesting horrors for years. Set on the farm of a Puritan family in 17thCentury New England, the film drew attention for the sense of reality it had: actors were trained in the agricultural customs of the 1600s, and the film’s script is written in the dialect of the time. Whilst perhaps destined to never have mass appeal, it was an intriguing feature and left many wondering how Eggers could possibly follow it.

“The Lighthouse is an even stronger film than its predecessor”

They needn’t have worried, as The Lighthouse is an even stronger film than its predecessor. Like The Witch, it is a period piece and pains were taken to make sure the script felt true to life. Pattinson’s lines are written in a dialect based on interviews with lumberjacks and farmers of the time, but the best lines are given to Dafoe. Dafoe’s lines are written in a charmingly nautical dialect inspired by writers such as Herman Melville but also real journals of 19thCentury lighthouse keepers. His ominous murmurings (“Why’d ya spill yer beans?”) and explosive rants will stick with a viewer long after watching.

The film itself feels like a throwback to an earlier era of filmmaking, being shot in the 1.19:1 aspect ratio of the very first films shot with sound, and in black and white. In the hands of a lesser filmmaker, this stylistic choice could feel like a gimmick, but it works perfectly.

The narrow aspect ratio can make the viewer feel as cabined, cribbed and confined as the characters, and the black and white makes the disturbing imagery pop even more than it would in colour. To reveal too much about some of the most striking images in the film would be to spoil it, but Eggers makes even the simplest images frightening. A seagull standing in the way. The back of a crouching man. A lone figure standing atop a lighthouse. Brrr.

Praise should go also to Mark Korven for his work on the soundtrack. The dissonant tracks keep a viewer on edge and contribute to a nightmarish soundscape constantly punctuated by foghorns. Sea shanties have never sounded so decidedly un-jolly.

The other (brilliant) aspects of production aside, the greatest part of this film is the performances by Dafoe and Pattinson. Dafoe, the veteran performer, is wonderful as the elderly lighthouse keeper. When he barks orders at Pattinson or launches into rants replete with references to Triton and other maritime myths, he alternates between a convincing man of the sea and a grotesque parody of the trope (the ambiguity being deliberate of course). Think The Simpsons’ Sea Captain by way of Kubrick’s The Shining.

Pattinson’s rookie is a similarly brilliant turn, joining the ranks of great performances in indie films by the actor who began his career in larger franchises (for which he can now be forgiven). At first seeming a stoic straight-man to Dafoe’s lunacy, he quickly begins to display instability of his own.

“The one thing it never is, is comfortable”

The film is essentially a two-hander between these two actors and their relationship is fascinating to watch as it shifts from master-servant, to nemeses, to sexually charged, to violent, and back again and all configurations in-between. The one thing it never is, is comfortable. Providing one isn’t easily disturbed, The Lighthouse has lots to love about it in terms psychological, mythological, and occasionally scatological.

Darkly funny and often unsettling, it makes another solid case for Eggers as one to watch in the horror genre and is a great way to kick off a new year of film.