Book of the Month: January 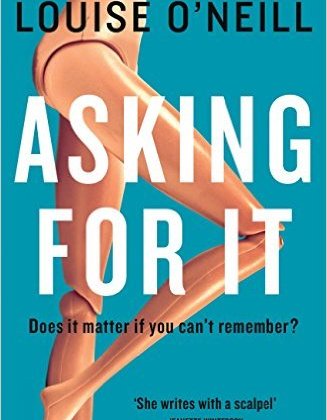 TITLE: Asking For It

Asking For It is Louise O’Neill’s second novel, after Only Ever Yours. Winner of the Irish Book Award 2015, Asking For It exposes society’s flaws under a bright and unyielding spotlight. Like Only Ever Yours O’Neill does not shy away from posing oft-avoided questions and placing the reader in challenging and uncomfortable territory. By the end of the novel, Jeanette Winterson’s remark on the cover of the book must be deemed accurate as it reads, ‘O’Neill writes with a scalpel’. It is no wonder that this young author has been applauded by so many – she is not afraid to write honestly on behalf of those who need a voice.

Set in the idyllic town of Ballintoom, Asking For It chronicles two years of protagonist Emma O’Donovan’s life. It begins in the summer of her of eighteenth birthday and Emma is the beauty of the town. All the boys want her, all the girls want to be her, and even mothers seem to wish they had her as a daughter. Yet, Emma does not believe she has it all. She’s competitive and an attention seeker; simply knowing she is the prettiest is not good enough, she turns to confirmation from everyone else.

This desire to be the best, and the environment of competition she is surrounded by, soon turns her whole life upside down. At a party one night, in a bid to ‘prove herself’, Emma loses everything she has ever known. The next morning she wakes up, but the sunburn and vomit on her are far from the pain and trauma she is about to find herself the victim of. She soon finds herself isolated by everyone, with no one but herself to depend on as she attempts to navigate her way through each terrifying new day.

In the beginning I had my doubts over the book. Emma O’Donovan seemed like a gorgeous but green-eyed monster from a book read during one’s pre-teen years. Obsessed with herself and her status, Emma’s character was not the most attractive. The first part of the book progresses quite slowly, as we explore the day-to-day life of the residents of Ballintoom, focusing primarily on the interactions of the barely legal cohort of the local school. Yet, one striking feature is the accurate reality created within the book. O’Neill wields the pen so skilfully, that one quite naturally transforms each page into a scene in real life.

The turning point in the novel is the night of the party. Here, O’Neill is merciless in depicting an eerily accurate combination of young adult insecurity fuelled by a culture of sexism – girls and boys not wanting to look inferior in the eyes of their fellow peers. In this setting, superficiality seems to rule supreme and Emma is its biggest catch. The reader, like Emma, is initially blissfully unaware of the true scale of events of the night of the party. The screenshots we are fed are not quite sufficient to piece together a coherent message.

From this point onwards, the reader develops a sense of solidarity with Emma, first by discovering the extent of the sexual abuse she has suffered, and then by journeying with her as she becomes prey to mental abuse. Through this second half of the novel, there is much revelation. Most of the characters are one-dimensional, and few receive much character development over the course of the novel, though this is a deliberate choice made by the author. Characters, save for a few, are used like props and when crisis strikes, they like the other elements in Emma’s life, quickly fade away. It is from sharing the safety and sanctuary of Emma’s house with her that the reader can process the grossness of the situation. O’Neill paints a world that is hauntingly isolated, and this vacuum relentlessly pursues Emma past the last scene.

Asking For It is not a story of hope or courage; it is an attempt to use fiction to amplify the harsh and brutal reality many face today. It is a brave and poignant piece of work that provokes contemplation and reflection, unashamedly voicing the experiences of abandoned and ostracized victims of sexual crime in our modern world. This novel is bleak because it is realistic, tragic because it is true, and relevant because society usually prefers ignorance. Most importantly, this is a book that spreads awareness; with each person who reads it, the issues raised (sexual consent, victim abuse, discrimination, cyber bullying, suicide and many more) have a platform to be considered by the reader personally.