Behind the Scenes at NNT – ‘Stags and Hens’ by Willy Russell

Annabel catches up with the director, producer, and cast of upcoming, sure to be hilarious, NNT production 'Stags and Hens'.
0 April 3, 2019 12:58 by Georgia Butcher 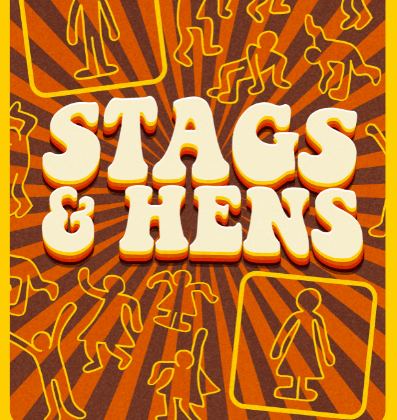 Liverpudlian accents, sparkly flares and a whole lot of energy. That’s what greeted me when I went to interview director Chloe Richardson, producer Tara Phillips, and cast members Sally Nesbitt, Kate O’Gorman, and Jake Ellis, of the NNT’s upcoming play Stags and Hens by Willy Russell. The enthusiastic and bubbly cast of the play surrounded me as I asked them about their upcoming play.

So, could you give me an overview of the play?

Chloe: So, the play is set in 1970s Liverpool, the night before the wedding of Linda and Dave. As the men embark on their stag do, and the women on their hen do, they soon realise that they’ve ended up at the same nightclub! It’s basically a really enjoyable and silly look at the drama that can go down when exes turn up, arguments go down and a whole lot of fun is had.

“With Stags and Hens, you are able to fully enjoy the silliness of the story and come out feeling really uplifted and happy afterwards.”

What drew you all to either direct the play, or audition for it?

Chloe: I think the main thing was the pure fun of the play. Here at the NNT we put on so many plays with really deep and complex storylines covering very serious topics. With Stags and Hens, you are able to fully enjoy the silliness of the story and come out feeling really uplifted and happy afterwards.

Kate: Yeah, I’d definitely agree with that. For previous plays that I’ve done I’ve often come out of rehearsals feeling so drained and emotionally exhausted because of the intensity of the issues covered. After these rehearsals I feel so energised and happy – hopefully the audience will feel the same!

Tara: We’ve got a great set and costumes as well which is always a bonus.

Let’s talk about the costumes: the process, the results and everything in between?

Chloe: We had a LOT of fun with the costumes. We basically made mood boards, researched 70s clothing and hairstyles and got as much inspiration as possible before putting things together. We’ve got all the flares and bright makeup. I think Jonny’s costume is my favourite: an all-white 70s-style suit: flares ‘n all.

Some of the cast cringe at this statement. Mostly the boys, for whom flares are probably not a solid part of their wardrobe. We all laugh.

“By setting this play where we did, it gives us a real sense of intimacy with the characters as the story plays out.”

Q: You mentioned that the play is set in the loos; not a traditional set for a play. What does the set bring to the play as a whole?

Chloe: Well I think the girls out there know that the loos of a nightclub can be home to a whole lot of gossip and drama. It’s a bit like that in this play. By setting this play where we did, it gives us a real sense of intimacy with the characters as the story plays out. We get to see them without the façades they might have had if they were on the dance floor.

Sally: It also means we get to watch the play from both the stags’ and the hens’ perspectives which is pretty cool.

Tara: Yeah, it also makes everything that little bit more relatable. People will hopefully be watching something that they find really familiar, and therefore funnier.

Jack: Obviously not a lot tends to happen in the men’s loos on a night out – the same definitely can’t be said for this play!

What would you like the audience to take away from the play?

Chloe: I just want everyone to really enjoy themselves and come out of the theatre feeling great. We’ve got some really groovy music too which I think people will love.

“If the end result is anywhere near as good as what I’ve witnessed in rehearsal, we are all in for a treat.”

As I finish the Interview, I am asked to write up the responses “cleverer”. To me it’s pretty clear that no exaggeration of the director’s or the actors’ talent is needed. This play has been brilliantly directed, cast, and acted by all involved. If the end result is anywhere near as good as what I’ve witnessed in rehearsal, we are all in for a treat.

To go and see this hilarious and feel-good play, head down to the Nottingham New Theatre between the 3rd and 6th of April.

Can you murder a robot?

The Spring/Summer Trends to Look Out For in 2019