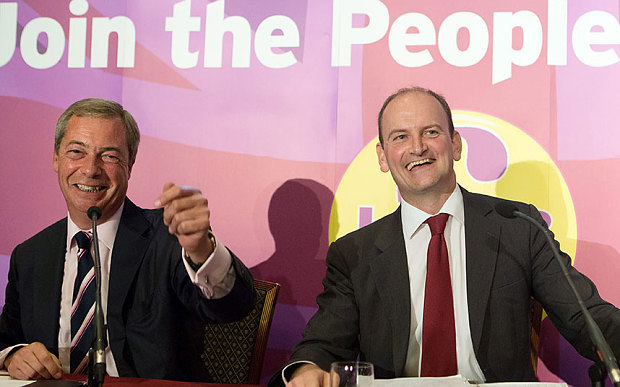 Douglas Carswell MP, riding high on securing 60% of the vote in the recent Clacton-on-Sea by-election, has boldly claimed that UKIP has ‘nothing that we cannot achieve’. Echoing the sentiments of the famous medieval heretic John Wycliffe, ‘Government of the people, by the people, for the people’, Carswell clearly has a grand vision for the future of UKIP in British politics. But what do students think? Do we think of UKIP as heresy or a much needed doctrine to free ourselves from the stranglehold of the establishment?

It is clear that the answer lies somewhere in the middle. There is no denying the popular mood of discontent throughout the country at the neo-liberal consensus amongst the three major parties. Even in Heywood & Middleton, apparently once a Labour safe seat, UKIP were only 617 votes from topping Labour. Crucially, however, the turnouts for the Clacton and Heywood & Middleton were 51% and 36% respectively, which does beg the question whether in a general election UKIP would receive such number of votes.

Additionally, a recent discussion on URN’s flagship politics show, The Big Picture (encompassing a panel of students and a professor), highlighted the importance of understanding the demographics behind the rise in votes for UKIP. A YouGov poll showed that men over 60 were 21% likely to vote for UKIP, whereas 16% of women over 60 would vote the same. This compares to only 7% of university graduates who would vote for UKIP; with a rather unsurprising 2% of Black and Asian voters only wanting to vote for UKIP.

Not surprisingly, the dominant issues that have stirred popular imagination for UKIP is over immigration and the European Union. As was mentioned on The Big Picture, the key success of UKIP is linking Britain’s recent economic malaise with the European Union. Voters are rightly worried about the direction of UK’s economy, yet it is interesting also to see how the left have responded.

Duncan Davis, President of the Young Greens, commented that ‘I don’t think UKIP are very relevant to students and young people. Their bigotry seems really old fashioned and nasty which probably explains why they poll badly for young people’. Interestingly, Duncan goes on to argue that ‘Our generation wants progressive policies and care for the environment, which is what the Greens provide’. Palpably, this does resonate across many student communities across the country.

What will really set the agenda for what we can expect of UKIP is the tantalising by-election in Rochester & Stood, caused by another defection by a former Conservative, Mark Reckless, on the 20th of November. Polls are not encouraging for the Conservatives, with one showing UKIP on a lead of 13%. Surely this should set alarm bells ringing across the Westminster establishment.

Duncan Davis, President of the Young Greens, commented that ‘I don’t think UKIP are very relevant to students and young people. Their bigotry seems really old fashioned and nasty which probably explains why they poll badly for young people’

Though we clearly are not in anticipation of a radical change in British politics, such as that seen in the advent of Thatcherism, UKIP is certainly causing jitters. Whilst the overwhelming structure of neo-liberal economics remains firmly rooted, agents such as UKIP are important to create debate about key issues facing us. For the vast majority of students though, we stand quite alienated from the ideas of UKIP. Farage may inspire productive heresy across the country, but for students, his party is failing to capture the imagination of a crucial part of the electorate.

Image courtesy of EPA via the Telegraph