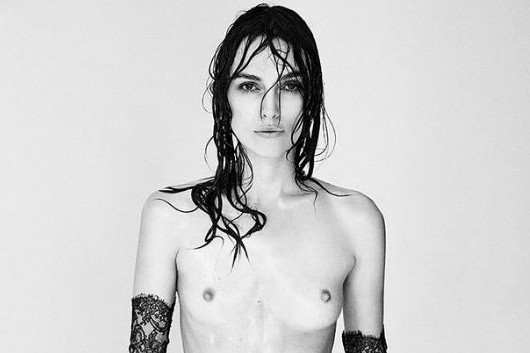 Impact Style debates whether Keira Knightley baring all in a recent shoot for Interview magazine was a viable form of protest.

A STEP IN THE RIGHT DIRECTION

This August Keira Knightley gave permission for an image of her topless to be published in Interview magazine, under the condition that it was to remain unedited. This image was to be her stand against stereotyping beauty in the fashion industry, with Keira deciding that the best way of breaking the stereotype was by using her own body as an example against it.

Unfortunately the fashion industry’s use of skinny models in their advertisements and campaigns has led to a growing impression within the public that the only way to be considered beautiful and desirable is to be skinny. Although, as Keira Knightley found out, it is not only necessary to be thin but to have curves too: an almost impossible expectation for the majority of women. Even Keira Knightley, who is considered to be a global fashion icon, has had her own breasts enhanced for campaigns. Surely this use of photoshop is unnecessary? Keira Knightley is beautiful in her own right, she has been cast as the leading lady in multiple films and fashion television advertisements: so why the need to make her fit the mould?

It’s because this stereotype has become seen as almost factual in popular culture. As generations have grown up surrounded by images of beautiful skinny women there has become less tolerance for diversity, with the curves of previous generations becoming less appreciated.

This is why I believe that Keira Knightley’s brave photo shoot in Interview magazine is a step in the right direction. By waiving her right to privacy she has shocked the public into taking notice. Baring your breasts to the public may not be the most conventional method of combatting a stereotype, but it does seem to get the story trending faster (although, even then it took three months for the story to break). In any case, Keira Knightley’s decision to publish this image has sparked a discussion about the detrimental effects of stereotyping beauty; a discussion that should help bring about some positive changes in the public perception of what beauty really is. 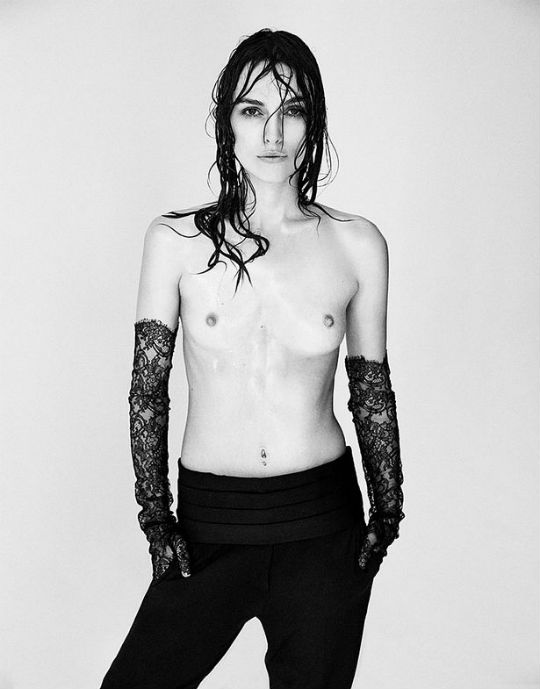 A STAGNATION OF THE ‘BODY IMAGE’ ISSUE

In fashion magazines, advertisements and photos featuring scantily clad women are pretty standard. You only have to flip through a copy of Vogue or see campaigns by Victoria’s Secret and American Apparel and you are bombarded with images of the ‘perfect’ female body. And while I’m not saying that that because this is such a norm in the fashion industry that this makes it right, the point I am trying to make is that in fashion magazines, revealing images of women are not normally contentious.

When Keira Knightly announced a week ago that for her topless photo shoot in Interview magazine she had specifically asked to not be photoshopped, her revealing photo became a hot topic for debate, especially when she pointed out that the photo was a deliberate protest against the unrealistic body expectations that women are faced with every day. Without this announcement, no doubt Keira’s photoshoot would have come and gone, probably passing under the radar for many of us, yet instead her photo is being hailed as a political statement, a challenge to the idealistic and extremely prescriptive body expectations Western society ‘requires’ from its women.

But unlike everyone else, I can’t cheer Keira on and see her photo as the two fingers up to the media, photo shopping and the manipulation of the female body that everyone else doe, this photo just promotes the world’s obsession with the female form rather than challenging it.

Keira said it herself that her topless photo was a form of demonstration and it’s this I have a problem with. Viewing a topless photo of a woman as some form of political statement is as damaging as viewing a woman’s naked body as a sexual object. This picture of Keira and the buzz which has been generated around it is perpetuating the idea that the naked female body cannot be exposed without there being some sort of meaning behind it. What entails then is a scrutiny of the female form, a discussion of it in order to find the reason for its exposure because (god forbid!) the female body just be revealed without purpose.

Keira’s photo doesn’t challenge this, it just perpetuates the idea, as she has exposed herself in order for her figure to be discussed in relation to female body representation in the media. In posing topless but also addressing the fact she did so as an attempt at challenging body image in the media, photo shopping and the fashion industry, Keira has simply opened up the female body to further examination and for these discussions about ‘perfect’ body image to be regurgitated once again within the media. This photo hasn’t challenged the female body expectations, it’s just meant that we have had to read all over again what our bodies ‘should’ look like and what they don’t, reminding us further about what is and what isn’t perfect about the female body. It’s counter intuitive that in trying to destroy the focus on the ideal body in Western society, the media carries on talking about what the ideal body is and it’s paradoxical that Keira Knightley ‘challenges’ body expectations by showing us her own. Body acceptance will only truly come when we simply stop analysing the female body: when it is not a sexual object, not a form of advertisement and not a political statement.

And as if to completely undermine Keira’s topless ‘protest’, you might want to be aware of the fact that this photo was a part of a campaign created by Interview, in which photographers were asked to take pictures of their ‘ideal women’. Undermines the grand purpose of Keira’s photo a bit, don’t you think?