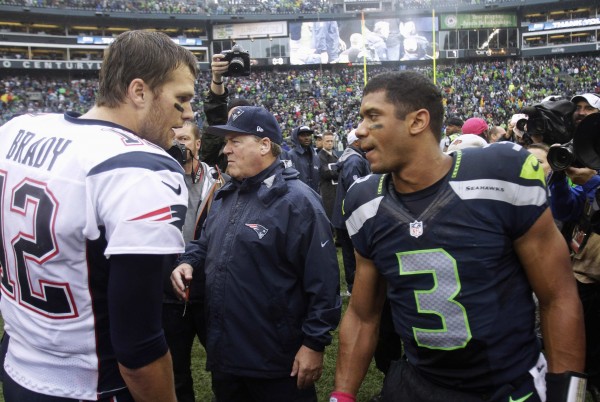 Quarterback Tom Brady and coach Bill Belichick formed the last dynasty in the NFL when the New England Patriots won three championships in four years from 2001. They are the only ones left to stand a chance against a new dynasty forming in Seattle.

The Seattle Seahawks have proved that last year’s Super Bowl win was no fluke with a stout defence, balanced running game and the help of their fans, dubbed ‘the 12th Man’. This is a dream matchup for the NFL as the old guard takes on this new, up-and-coming power. Although, Tom Brady and the Patriots have been consistently good and continue to reel off playoff wins (Brady now has 20) they haven’t won a Super Bowl in 10 years. One must wonder how long Brady still has at the top of his game. Deflated balls or not, the Patriots had a much easier time dismantling the Indianapolis Colts than the Seahawks had in barely slipping past the Green Bay Packers. So, in a battle of old versus new, here are some keys to victory in this game for each of the Super Bowl XLIX finalists:

If you pay any attention at all to the NFL, you have definitely heard about the scandal many are calling ‘Deflate-gate’. What happened? An NFL investigation showed that 11 of the 12 Patriot balls from Sunday’s game had been deflated below regulation size. This may be a big issue as the NFL attempts to sort out what happened, but I don’t believe that it affected the outcome of a 45-7 game. If this was a deliberate scheme, the Patriots must be reprimanded, but not in the form of suspensions to Brady or Belichick for the Super Bowl. All media attention for the two weeks leading up to the Super Bowl has been focused on this scandal and the Patriots need to do what they do best and just play the game. There isn’t a player-coach combination that would be better at putting aside off-field issues than these two.

The Seahawks are a young and confident team that would like to exploit Brady early with a turnover or a few big stops. A key in this game for Brady may be to go at the Seahawks’ secondary – the so-called ‘Legion of Boom’ – early on in the game, showing that he has no fear of throwing long on Richard Sherman and co. This secondary is very banged up, with both Earl Thomas and Sherman having suffered injuries in their win versus the Packers. If Brady can put them into a hole early, this Patriots team has shown itself to be well-suited to keep a large lead over the Hawks that the Packers could not.

Brady’s short passes against the blitz

All being said about going at the secondary early on, Brady’s bread and butter is throwing short passes and throwing against the blitz. This will be key to the Patriots offence as the game continues. Brady has proven this year to be one of his very best in throwing balls under 10 yards. He is top three in the NFL for QB rating, touchdowns, and third-down conversions on passes of 10 yards or fewer. Another huge contributor to this short-passing attack is Rob Gronkowski. ‘Gronk’ has had injury problems in his career but has proved to be one of the best in the league when healthy. He is having another monster year this season with 1124 receiving yards in the regular season and 12 TDs. He also captured 60 first downs in the regular season: ten more than any other Patriot. With Gronkowski at his disposal, Brady will have to continue to excel in the short passing game especially on third and short situations like he has all year. A huge battle during this contest will be the Seattle pass rush up against Brady.

It is the best passer in the league against the blitz versus the best blitzing team in the league. Brady can get the ball away very quickly, a huge plus in a game against the terrifying Seattle pass rush. Third and short situations will be the spots where both of these really come into play for the Patriots, who tend to throw the ball on third and short rather than run. What Brady does in these situations could decide the game.

Now onto the defensive end of things for the Patriots. Forcing turnovers will be a huge factor for their defence, especially after last week where Russell Wilson was turning the ball over left and right. Even bigger than forcing turnovers, however, will be how they react and play against the Seahawks top rated rushing attack. The Pats have proven to be a formidable team against the run—only allowing six rushing touchdowns in the regular season (second best in the league) and only allowing just over 100 rushing yards per game. That being said, they have not quite faced a rushing attack the calibre of the Seattle Seahawks. Whereas the Patriots offence starts with the pass, the Seahawks are all about the run. The two weeks of preparation will also help the Patriots out, as Wilson and running back Marshawn Lynch have proven to be the best in the NFL at running the zone-read option, which is when they read a defensive player and decide which one gets the ball. The Pats will have more time to figure out a defensive solution to these types of sets.

We’ve already touched on the Seahawks’ rushing attack from the perspective of the Patriots’ defence, but it is the most important part of the Seattle attack. The Seahawks are the league’s number one rush and are head and shoulders above the league averages in yards, yards per carry, and touchdowns this year. Especially after all the turnover problems last week, this team will need to get the running game established early on in the game before they try any tricky throws with Wilson, who may have lost some confidence last week. The Patriots have also not seen very much of the zone-read option this season, which may come into play if they are not suitably prepared for it. This will have its biggest impact in the red zone, as that is where Wilson or Lynch frequently score rushing touchdowns. 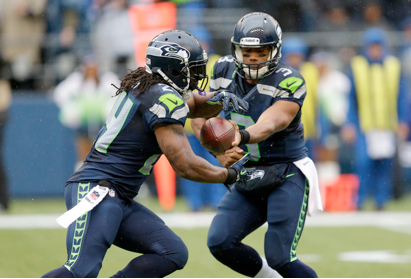 Another thing that the running game will do is open up the defence for passes as they become accustomed to the run. If Wilson can start off the game like this then once he gets into a groove they can mix up the play-calling a lot more. This running offence can be a danger on passing plays as well: Wilson has proven to be one of the best running QBs in the league and he can make plays with his feet on designed passes. Wilson has picked up 49 first downs running the ball this year, and this could be a key move for the Seahawks to extend drives. For the Seahawks to win this game, they will need solid rushing performances from both Wilson and Lynch.

Seattle was a team that struggled early on in the season, starting 3-3 before reeling off 9 wins in their next 10 games to take the top spot in the NFC. Much of this can be contributed to their pass rush, which was sluggish early on in the season but then began to match last year’s phenomenal form. This starts out with Cliff Avril and Michael Bennett, who are the Seahawks’ defensive ends in their 4-3 scheme. They pressured opposing quarterbacks 136 times combined over the season, the most for any pair of 4-3 defensive ends. Along with these two, there is a lethal outside rush from Bruce Irvin and O’Brien Schofield. Brady throws very well against the blitz, but if the Seahawks can create pressure without blitzing linebackers, he will be forced to throw into the daunting secondary of the Seahawks, which is exactly what they want and what this Seahawks team is known for. Earl Thomas and Kam Chancellor are two of the best safeties in the league and Richard Sherman is regarded by many – and himselfgas the best cornerback in the league.

If the Seahawks can get a quick pass rush going and take away the short passing routes that Brady likes, then he will forced to throw longer into the secondary. One other facet of the Patriots offence that the Hawks must address is the resurgence of running back LeGarrette Blount, who ran for 140 yards and three touchdowns against the Colts last week. The key for the Seahawks to combat this is middle linebacker Bobby Wagner. He missed five games in the middle of the year with an ankle injury, but with him in the lineup the Seahawks are considerably better against the run. Other teams are averaging nearly a yard fewer per carry and their percentage of rushes for first down is also remarkably lower with Wagner in the game. Simply stated: if the Seahawks defence plays as well as they can, Seattle will be back to back champs.

Yes, these are two different things, but they are two of the reasons that the Seahawks would have lost to the Packers without an all-time great comeback at the end of the game. Starting off with the turnovers: it was a huge problem. A team is not supposed to win playoff games when they turn the ball over five times, four of those being interceptions. There is no way the Patriots are going to let Seattle win this game with five turnovers – they will take advantage. It basically comes down to the fact that Russell Wilson has to be more careful with the ball. When a team is as good at rushing the ball as the Seahawks are, then there is no need to make stupid mistakes that jeopardise their chance of winning. Wilson only threw seven interceptions in the regular season and has been known as a quarterback who does not turn the ball over often. If he can get back into that form, the Seahawks will be in a much better place. The other issue heading into this game is the injuries of the Seahawks, especially in the secondary. Richard Sherman suffered an elbow strain while Earl Thomas dislocated his shoulder in the win over Green Bay. These are the two major pieces to the best secondary in the league. If both of these players are healthy and playing to the best of their ability, it will really show for this Seahawks defence. These two problems are the biggest issues for the Seahawks heading into the Super Bowl and, if injuries and turnovers are a non-factor for them, they should come out on top.

When I think about how this game turns out, a voice keeps telling me that it will be the Patriots in a blowout. The way Tom Brady has been playing, the way in which this Patriots squad is beating other teams and have been seemingly unstoppable make them seem like the favorites. However, as I was watching the end of the Packers-Seahawks game last week, there was just something about the fight in that Seattle team that gave me the feel of a championship team. They found a way in the last game and I believe they will find a way in the big game, too. If Sherman and Thomas are healthy, Tom Brady will not be able to throw deep balls against this team and the pass rush should be able to limit his efficiency in the short passing game. If they can do this and get their running game going while also limiting their turnovers, I see them coming out with the win in a much closer Super Bowl than last year’s blow out and it could come down to some more late game magic from Russell Wilson.

Out Of Fashion: Pellegrini, Martinez and Rodgers

Professor Martyn Poliakoff knighted for his services to chemistry