Duck Soup was originally released in 1933 and directed by Leo McCarey, a filmmaker with experience of both drama and comedy. It features the iconic Marx Brothers, a classic vaudeville comedy troupe, who wreak havoc in the fictional state of ‘Freedonia’ and several of its neighboring countries. The antics range from slapstick interactions with street-vendors to provoking (and subsequently fighting) a large war.

As it celebrates its 82nd birthday, McCarey’s mad creation once again fills our screens with utter anarchy. But whilst the outrageously bonkers nature of the film may make it less accessible for some members of the modern audience the actual comedy is likely to be received well. The Marx Brothers – Groucho, Chico, Harpo and Zeppo – act as a great ‘connector’ for audiences. The very first scene involves a great parade of royal splendor as the country awaits the arrival of their new leader only to be landed with Groucho. The deliberately overly-affected accents of the high-society characters are spliced with the Brothers’ endless childish gags to great effect. It is incredibly quotable and much of the humor feels as fresh as anything today, tackling subjects such as class, warfare and marriage.

“I think we should have a standing army.”

“Why should we have standing army?”

“Because then we can save money on chairs.”

The plot is inherently ridiculous but anything else would feel wrong. We move from Groucho’s disastrous term as Freedonia’s leader to Harpo and Chico’s antics in the street before bringing the parties together for an impromptu war. The slapstick is great fun, though doesn’t feel as sharp as the actual dialogue. That said, hilarious moments still arise; after a second tank shell flies through an open window (and out the other side of the building) Groucho decisively and smugly shuts the window as a proposed solution.

The best scene involving comedy’s physical side is the famous ‘mirror scene’ in which Harpo and Chico are dressed as the same person and match each other’s actions on opposite sides of where a mirror used to be. It starts with simple hand movements before progressing to increasingly elaborate actions which are mirrored perfectly. Guaranteed to get laughs, it is an impressive demonstration. 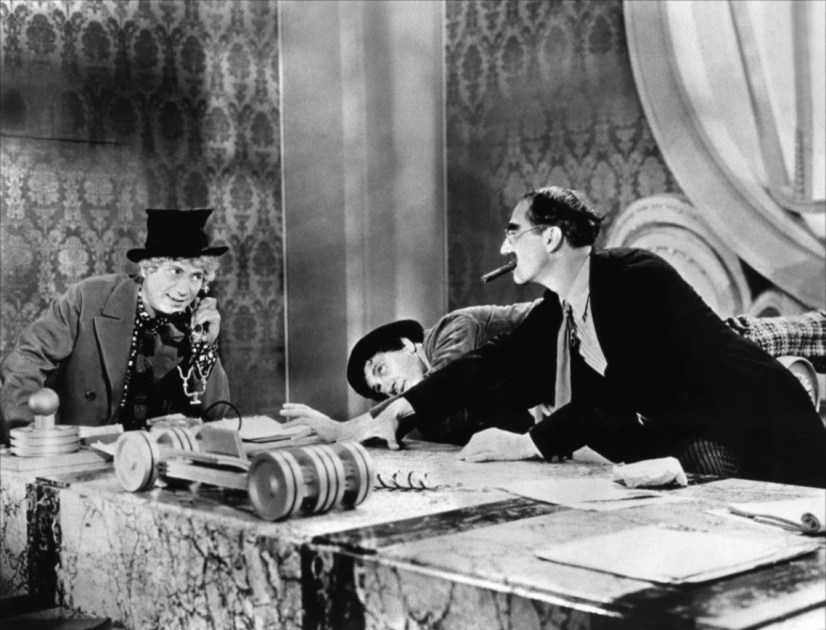 The running time is short by today’s standards at just sixty-two minutes and would therefore now be classed as a short film. Strangely enough, even at this taut length some sequences (particularly those involving Chico and Harpo’s slapstick) become slightly stale, though most finish with amusing enough flourishes. Several crazy music sequences are also present which all get more and more bizarre as they go on. The film isn’t a musical per se and these scenes are a welcome break from the other action. Occasional uncomfortable anachronisms arise concerning race and gender, but it is to be somewhat expected given the original time of release.

A charming product of the 1930s, Duck Soup is a delightful romp that generally feels as relevant and funny today as it’s reported to have been early in the 20th century.