“How Have You Never Seen…Pulp Fiction?” 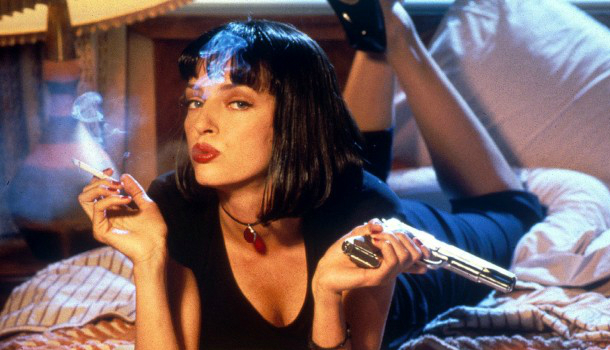 Quentin Tarantino’s Pulp Fiction has become one of the most iconic films of our time; such a revolutionary and unparalleled pastiche that it’s difficult to believe I have somehow managed to avoid it all these years. There are references to this film’s most memorable scenes everywhere in popular culture, from merchandise like bad motherfucking wallets, “22 Short Films About Springfield” in The Simpsons, and Winston ‘The Wolf’ Wolfe (Harvey Keitel) being featured in the latest Direct Line insurance ads. Once watched, all these references and jokes make sense, despite the fact that the film could leave a bit of a confused awe due to the unusual and darker comedic conventions.

Originally released in 1994, Pulp Fiction, at the time, and still even today is memorable for its layers of creativity. The film’s structure follows the lives of different characters occupying the same physical space, divided by a title and eventually merging into a singular yarn by the end. This unconventional filmmaking technique may remind one of the similarities to the formal qualities of a stage production with multiple acts, and as a consequence, does force the film to feel slightly disjointed, often disrupting the flow and pacing that we expect from the motion picture form with its non-linear structure.

In his second feature nevertheless, Tarantino casts some excellent actors in this pop culture sensation which makes the film thoroughly entertaining. The comical and sometimes dark one-liners of this postmodern triumph manage to sustain a balance when equated with some more serious and bloody scenes, with Uma Thurman, Samuel L. Jackson, John Travolta, Bruce Willis and Ving Rhames capable of bringing a dialogue-heavy script to its most compelling potential.

Even with some comical relief, some scenes are still quite appropriately shocking however, with the absence non-diegetic music during some controversial moments giving the tone of the film a somewhat realistic feel at times. Despite blood splatters and head explosions, the consequences of this filmic violence is experienced by the characters, with the stylised approached to shooting allowing for a successful balance of seriousness and humour at the script’s request.

When the soundtrack does kick in, the tracks are perfectly welcomed and utilised, particularly the surfer rendition of “Miserlou” by Dick Dale & The Del-Tones in the opening scene. Elsewhere throughout Pulp Fiction, the meticulously selected array of songs including classic American soul, pop and rock n’ roll just fit in perfectly with the unconventional aura Tarantino’s film carries.

As well as listening, some scenes really are just great to watch, including the diner scene where Vincent Vega (Travolta) takes out his crime boss’ wife Mia (Uma Thurman). This is truly brilliant. The sassy, borderline bitchy lines and anecdotes pushing their way out of Mia’s mouth force one to contemplate how involved she is in her husband’s affairs and whether she is the promiscuous, cocaine-addicted troublemaker she wishes to be, or just a bored wife who loves to dance. Vincent meanwhile acts as the ‘tough guy’ who’s actually a gentleman after all, most evident when he enters a swing contest with Mia, revealing he’s more than just a hitman but a man with feelings, even if those feelings are just fear for his own safety. 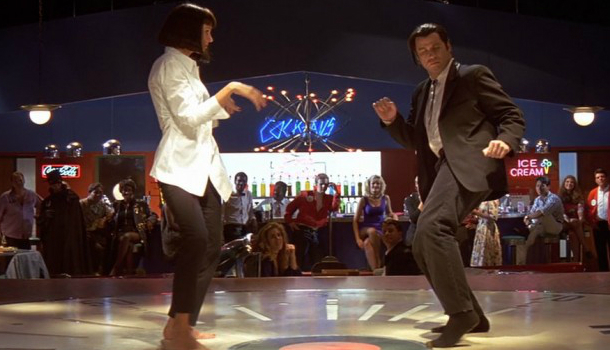 Although Pulp Fiction has become a classic, it’s certainly a strange film. The unexpected deaths, rape and drug abuse result in an experience that is not always easy to watch for the first time. Although Samuel L. Jackson and John Travolta have some humorous back and forth exchanges, the unpredictable and unconventional features of the film can be somewhat uncomfortable to watch as the narrative progresses.

With all the hype around Pulp Fiction and the influence it has had on modern film, it’s surprising to discover that not much much actually happens, but it’s the way in which the events happen and unfold narratively that makes its genius undeniable. In one scene, Vincent and Jules (Jackson) have to wear some old clothes because they have blood on them – seems pretty straightforward and simple. But because of this, we get some perfect shots that make the film iconic – after dealing with a robbery in a most professional hard-man eloquence, they leave in a dramatic way tucking their guns into swimming shorts.

Pulp Fiction certainly is a complex film and is more than meets the eye, with scenes that are truly worthy of the impact the film has had on popular culture today, and because of this, I’m definitely glad to have finally watched it despite the film’s structural drawbacks. And although it’s been over twenty years, the line regarding what a “Royale with cheese” is, is one I imagine will always be funny and ageless.

Volunteering in Madagascar: Interview with a UoN student