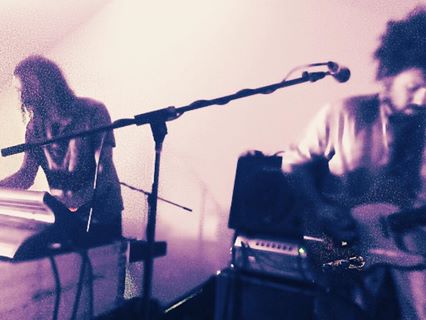 ‘Look at us, do we look like we’ve ever been late for anything in our lives?’. An hour after they were meant to, the band take to the stage guilt free. In their defence they have a point, a punctual Pond would have come as a shock.

Although they’re dopey and not entirely coherent, the band make an effort to start the show with some conversation after their apparent ‘poor chat’ at the previous night’s show. Taking their social capabilities about as far as they’ll go they launch in to album opener – and effective show opener – ‘Waiting Around For Grace’.

Letting the songs doing the talking works as a much better tactic for Pond. While their acute comment observing that black pudding, sausages and bacon all in fact ‘come from pigs’ gets a few laughs, the strength is undoubtedly in the songs.

Slacker appearances aside, they’re pretty rigid on the set-list choices

Unsurprisingly, the importance of getting the songs right is something Pond seem in sync with. Slacker appearances aside, they’re pretty rigid on the set-list choices. A shout calling for ‘Moth Wings’ is quickly dismissed with a laugh saying something along the lines of ‘more like shit wings’. Regardless of whether they’ve chosen them correctly, they’re pretty confident with the songs they’ve decided to play.

‘Giant Tortoise’, one of the few tracks not off the new album, was a well played card; its anthemic guitar solos ensuring an energised crowd to end the show. Playing themselves out on title track ‘Man It Feels Like Space Again’, the focus on the new record is boldly underlined. Late arrivals they may be, but they know how to play a show.

For more from Impact Music, check us out on Twitter

Inequality in Education: “Things are getting worse for poorer children, instead of better”