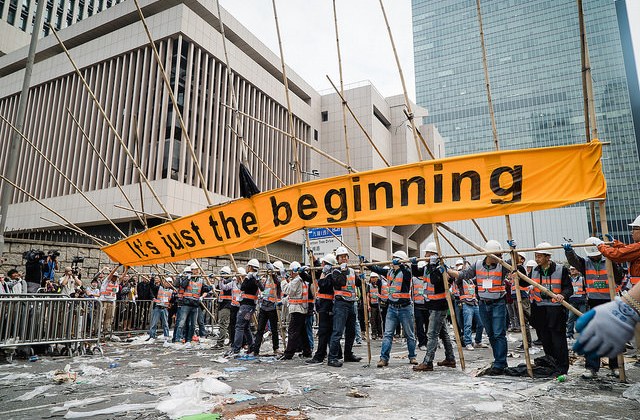 Hong Kong lies at the tip of Southern China. Described as a vibrant and spirited city, with a spellbinding natural harbour and futuristic architecture, Hong Kong has an energetic pulse and a noticeable lust for success. And while soaring towers frame a new world skyline that protects a dense metropolis below, the city stands against a backdrop of sprawling green mountains; a setting which perhaps embodies the very essence of modern China.

From a distance, Hong Kong can be mistaken for an independent nation, rather than a region curiously under control of another. Yet, Hong Kong has never truly been free, carrying a complex history of dispute and foreign authority alongside its otherwise glossy world image.

A British colony from the 1840s, Hong Kong was occupied by Japan during the Second World War, before being reclaimed by Britain until 1997, when the territory was taken by mainland China. Yet despite remaining under the gripping wrath of China, Hong Kong has a degree of autonomy from the People’s Republic through its own political system.

However, a dark cloud has hovered across Hong Kong over recent months in the form of the ‘Umbrella movement’ which describes a series of non-violent civil disobedience activities, asking for full democracy in the election of the next Hong Kong leader in 2017. This request opposes the election plan constructed by China whereby a 1200 strong, carefully selected Chinese committee will vote on up to three electoral candidates before the Hong Kong public is able to vote.

Carried by protesters for much of the movement, the coloured umbrellas seen in media discourse were originally used as protection against police pepper spray, but they have since risen to become an iconic symbol for the demonstrations. 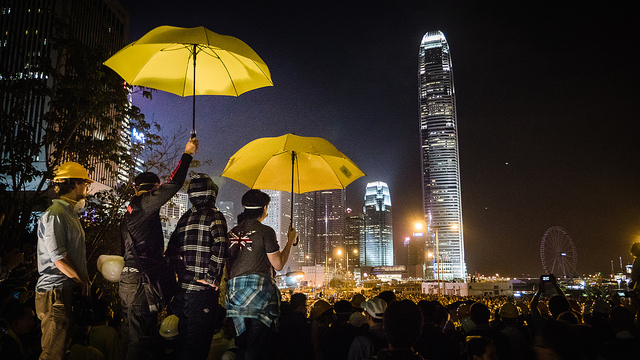 While floating brollies have fronted the campaign visually, it is the students of Hong Kong who have led the campaign to global publicity, with a number of groups including the Hong Kong Federation of Students and student activist group, Scholarism, taking part in civil disobedience activities.

The leader of Scholarism, Joshua Wong, has become a face of the movement through leading campaign efforts and taking on a 108 hour hunger strike in December, which asked the government to recommence dialogue on electoral reform. Wong later quit his strike due to medical advice.

The movement first gained momentum in June 2014, when over 700,000 citizens participated in an unofficial referendum vote requesting a public voice in the shortlisting of candidates for the 2017 elections, before Beijing judged the vote as illegal.

By July, tens of thousands of protesters took part in one of the largest pro-democracy rallies Hong Kong has ever witnessed. However, the chance of democratic election was ruled out with mainland China stating that only candidates approved by Beijing could run.

Events intensified between September and December, when over 10,000 campaigners occupied the centre of the city in protest against China’s crushing decision. 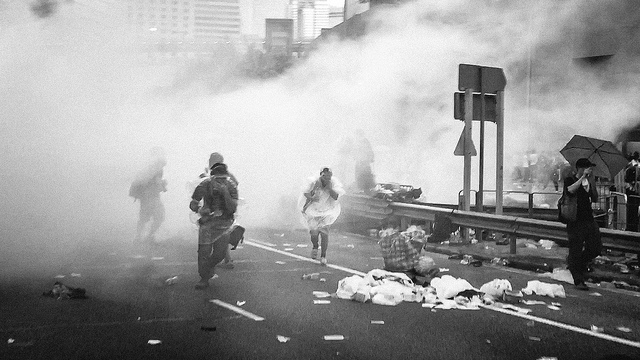 As friction between activists and police mounted, a number of violent incidents occurred, including an attack by police on a male protester in October, which shocked not only the community in Hong Kong but much of the world too.

Leading the protester into a dark corner, Hong Kong police officers kicked and beat the man to the ground, causing wounds to his head, neck and back. This was not only an abuse of police power, but a moment that would firmly etch itself into the memory of a generation.

By late October, the movement reached new frontiers when the United Nations Human Rights Committee stressed the need for the right to vote and the right to be elected. Beijing responded again by stating that its policy on the Hong Kong elections was fixed.

Tactics used by police included baton charges, leaving some protesters bleeding, and the use of pepper spray which caused vomiting. This was seen by the public as brutal in comparison to the non-violent ‘love and peace’ approach taken by protesters and has worked to tarnish the reputation of the Hong Kong police. 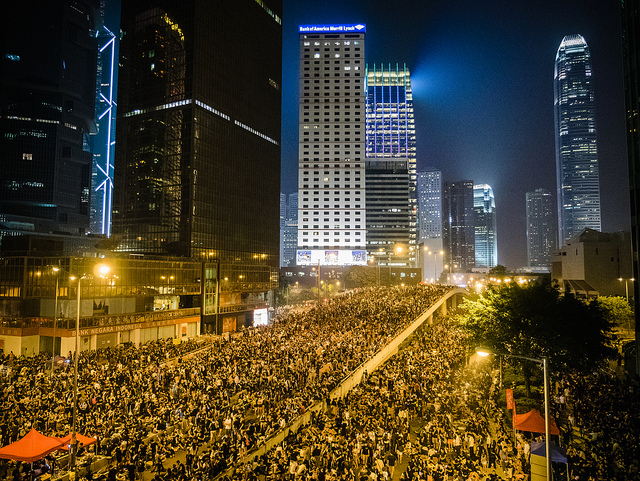 In fact, the reputation of the city police could prove to be one of the greatest victims of the movement; from using sledgehammers to remove protest barriers, to the unforgiving use of teargas, the general public have been shocked at the rough conduct of the police. 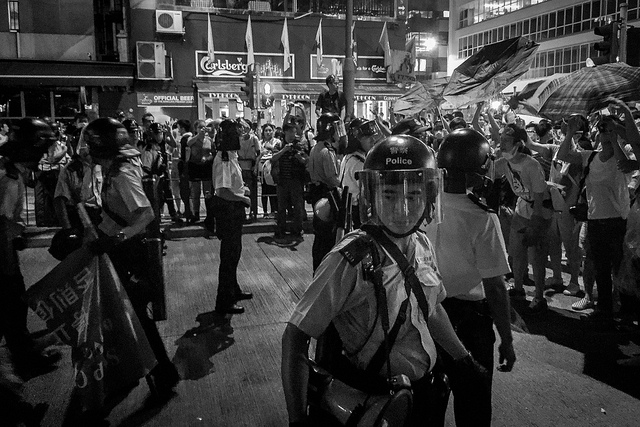 The movement has also impacted the wider community in Hong Kong through disruption to the lives of regular citizens via road blockages and school closures, economic loss for local businesses and an apparent widening of the gap between Hong Kongers, tourists and immigrants from mainland China. Thus, the movement is said to have ‘paralyzed’ the city.

However, much hope and positivity has also emerged, mainly through the unity of young people across the city. For many who have grown up in crowded tower blocks, this was the first opportunity to become active on the ground in their own city. Unleashed from the cage of the classroom, students have been exposed to a realm of creative expression and free speech on the streets of their homeland.

Third year University of Nottingham student Naomi, who is studying in Hong Kong for a year, explains a positive experience of the movement:

“I went down to see the protests a couple of days after they started and it really was incredible to witness. The atmosphere is hard to describe, I guess the best word for it is uplifting. It was very peaceful and everyone was looking after each other, handing out food and water and even doing their homework!

I spoke to some locals about it, and they had mixed opinions; some were very supportive and spent a while camped out there, whereas others thought that they should be grateful that they already get any kind of vote and that the protests were pointless, as they didn’t see Beijing changing their mind”.

She went on to state: “My roommate is from mainland China and she thought that locals should be grateful they get a vote at all, even if it is restricted, and was certain that Beijing would not change their mind.  There were also signs all around my university campus with phrases like ‘If not now, when?’ and pictures of the protests and the police using tear gas”. 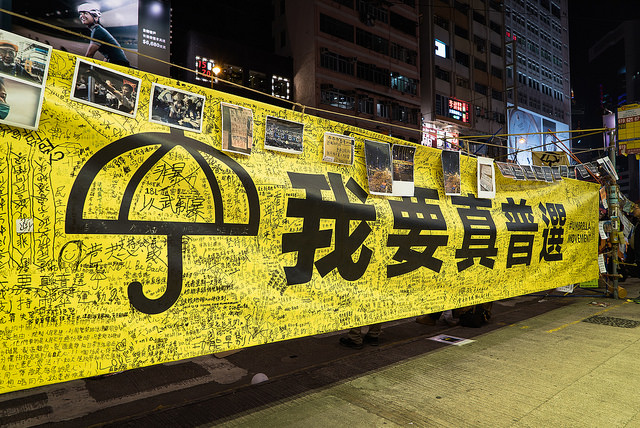 As a result of this, demonstrations have also occurred across the globe, with many taking place in front of Chinese embassies. A petition to the White House was also created and much support for Hong Kong was seen in Taiwan, including a gathering of over 10,000 people in Liberty Square in Taipei.

For activists though, the Umbrella movement represents not only a campaign for today, but one entwined with tomorrow. Many have future generations firmly in their minds and remain thirsty for a future filled with greater autonomy. 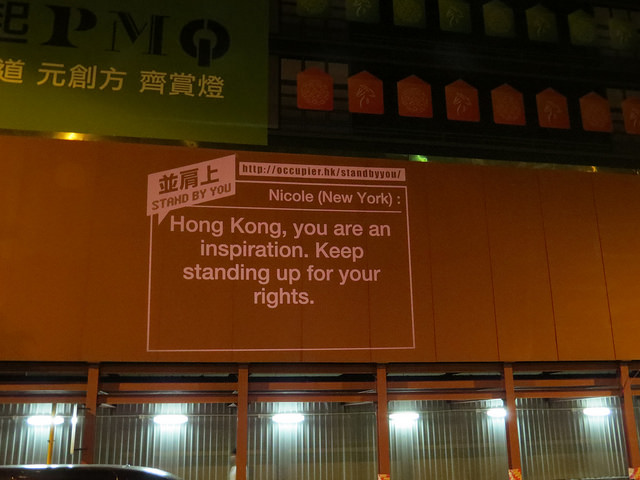 The movement has been cited as a generational revolution; one that will ripple into decades to come. With common social and political goals, protesters have united a generation, sparking hope of a new order for the future which they themselves can forge.

But for now, Hong Kong remains tangled within China’s ever expanding net of power, and its campaign to swim free from its captor trudges on.