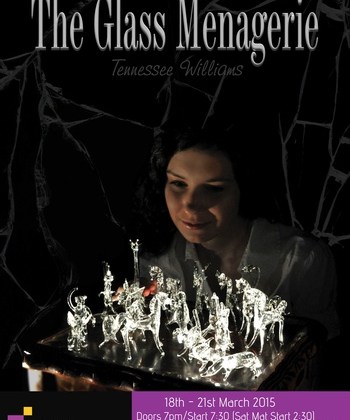 Any play that demands a Southern American accent from its actors is a play that evokes a certain sense of trepidation in its audience. If the accent isn’t right, very often it is impossible to focus on anything else. It was with this reservation in mind that I watched the auditorium lights dim and the silent, almost sinister opening scene of The Glass Menagerie begin. A moving silhouette lit partially by a cigarette gradually transformed into a young male protagonist who self-consciously analysed the play. ‘It is dimly lighted, it is sentimental,’ he told us. The accent was by no means perfect, and the fiddle in the wings, although faithful to the script, threatened to mar the eerie ambience set by Tom’s speech. But the opening scene made a promise to the audience that it would not fail to fulfil: this play would be a gripping, emotional and at times necessarily comedic portrayal of the unrelenting power of memory.

The Glass Menagerie tells the story of Tom Wingfield, an aspiring poet forced to work in a shoe warehouse by a financial obligation to his mother and emotionally fragile sister Laura. His father had abandoned them years prior. A combination of the memory play genre and the previously genteel life of Tom’s mother Amanda leads to an exaggerated representation of her superficial niceties, captured spectacularly by Chloe Bickford. The only actor to pin down and maintain an authentic accent throughout, Chloe undoubtedly illuminated the often lowly-lit stage. However, all actors performed strongly, and the nervous physicality of Laura (Emily Brady) combined with the comedic timing of Tom’s (Nick Gill) delivery and the gentleness of Jim (Will Berrington) provided a much needed balance between intense emotion and sarcastic humour.

The attention to detail in set design, creating a realistic homely dynamic, amplified such intimacy.

In line with the self-conscious theatricality of the first lines, the costume and music were clearly chosen with the finest reference to the dialogue itself. The deliberately ostentatious dress worn by Amanda as she spoke of the necessity of light clothing in summer was irony well received. Likewise, although the lighting at times seemed slightly delayed – Tom asked us to look at a painting of his father that was shrouded in darkness long after he spoke – the warm glow of the spotlight complemented the small stage space to provide an intimate atmosphere for those watching. The attention to detail in set design, creating a realistic homely dynamic, amplified such intimacy. Despite the fiddle, which I found personally unconvincing, the music was equally poignant, particularly when used to highlight the tension between Tom and Amanda at the dinner table.

Without a doubt, it was a brilliantly presented piece of theatre.

In short, Tom Proffitt’s rendering of Tennessee Williams’s The Glass Menagerie was a pleasure to watch. It captured the tension between the conflicting interests of each character in the play in such a way that not even a poster accidentally dropping off the wall and sticking to the shoe of one of the actors could detract from its power to grip. Without a doubt, it was a brilliantly presented piece of theatre.

Week One To Be Overhauled