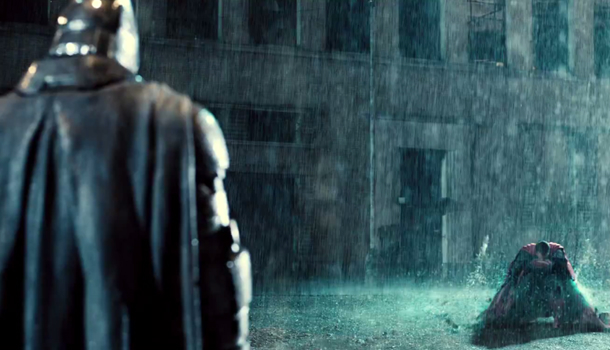 Ahead of its scheduled Monday release date, the hotly anticipated Batman v Superman: Dawn of Justice trailer has been officially released by Warner Bros., following an online leak Friday that spread like wildfire.

One of the most noticeable aspects of this teaser is the riddance of Batman’s growling vocalisations from the Christopher Nolan trilogy, replaced with a cold mechanical voice that is easier to understand and far more difficult to mock. “Tell me…do you bleed? You will” he chillingly tells Superman in the climactic confrontation of the trailer.

Ben Affleck as the Caped Crusader is looking to be the most intimidating Batman to date. He is by far the largest incarnation we have seen on the big screen, and if Jeremy Irons’ speech is anything to go on, he’ll also be the most frightening: “The rage…that turns good men cruel” narrates Irons’ Alfred Pennyworth in the trailer, overlaid with images of Bruce Wayne’s implied anger over The Last Son of Krypton.

The opening shot seems to reveal that Metropolis has been rebuilt after Man of Steel, and at its core, a statue of Superman. Drawing inspiration directly from Frank Miller’s The Dark Knight Returns, it would appear that the media are going to play a key role in the overall plot of this sequel, with Superman at the centre of a debate concerning an aliens’s place within human civilisation. It seems that some people see Superman as a saviour, a God, while others see only an extraterrestrial threat, with Batman perceiving only the latter.

Be prepared for this clash of superhero titans, coming to cinemas on March 25th 2016.