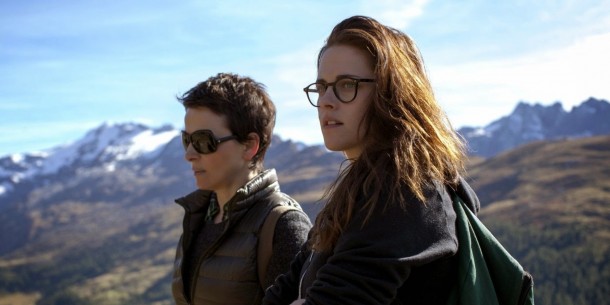 Let’s be honest, Kristen Stewart had a rough time after Twilight. In its wake, she’s been haunted by memes of her ‘one-expression’ acting-style, not to mention association with melodramatic ‘teen-cinema’. But all that could be about to change. Following her turns in Camp X-Ray and Still Alice, Clouds of Sils Maria is a thought-provoking psychological study, which gives its leads the chance to shine.

Clouds is the most recent film by French director Olivier Assayas and follows the decline of ageing actress Maria Enders (Juliette Binoche). At eighteen, she starred in both the play and film versions of ‘Maloja Snake’, directed by Wilhelm Melchior. At the peak of her physical beauty, she played Sigrid, a fiery girl who seduces her older employer, Helena. Twenty years on, Melchior has passed. In commemoration, director Klaus Diesterweg (Lars Eidinger) seeks to stage a new production of ‘Maloja Snake’, only this time with Enders playing the older role. Spurred by the desire to honour her friend, she accepts. What follows is touching exploration of time, status and age.

The lead actresses all have their moments, but each contributes more than just a performance. Put simply, Clouds only makes sense in context, when there is an awareness of the actors’ previous roles. Chloë Grace Moretz plays Jo-Ann Ellis. Like her counter-part, she too is an actress. Both are 18, and have recently starred in superhero films. Many viewers will recognise Moretz from Kick-Ass, which is highly similar to ‘Time Shift’, Ellis’s blockbuster hit. Stewart’s character, Valentine, criticises how ‘pre-teens’ determine which film-stars become famous. This is injected with ironic given much of her success is owed to Twilight. Recognising these references gives the film a deeper meaning; it draws attention to the similarities between actors and their roles, how one informs the other, and vice versa.

“Put simply, Clouds only makes sense in context, when there is an awareness of the actors’ previous roles”

Enders is a method-actor. To play Helena, she must get inside her head. However, doing so involves confronting her growing weakness. With age comes respect, but also a loss of youthful energy. She is no longer considered ‘fresh’. Maria Ender’s wants to be modern, but next to the eighteen year-old Ellis, she can’t compete. The writing does a good job of reflecting this. Between rehearsals, Enders spends her time criticising Ellis’ lifestyle, popular culture, and the ridiculousness of ‘Maloja Snake’. In reality, these are desperate attempts of clinging to an old way of life. Cynicism is a mask for her growing insecurities. In a world of superheroes and youth, is there space for an older actress? Is she even relevant anymore?

Stewart and Moretz fade in and out as needed. Binoche is the only constant. There isn’t a bad performance, but it’s clear that they’re all designed to highlight certain aspects of Ender’s psychology. Ellis is a wild-fire. Scandal follows her like smoke, and nothing can stop her rise to glory. Stewart is a twenty-something personal assistant, completely in-touch with the modern world. She relays cultural information, whilst also singing Ellis’ praises. Together, they draw out Enders’ feelings of inadequacy, upon which the whole film rests. This is emphasised by its somewhat ‘bitty’ three-part structure. The first two ‘acts’ are dominated by Valentine and Ender, the last by her and Ellis. The appearance of characters, followed by their equally sudden disappearance, serves to highlight their function as mere plot-devices.

“In a world of superheroes and youth, is there space for an older actress?”

In the grand scheme of things, this doesn’t matter too much. Binoche delivers a thoughtful performance, which fully embodies the reluctance to accept weakness. This ensures that interest is maintained throughout, even whilst trying to keep track of the difference between ‘real-world’ and ‘fictional’ characters.

There’s a lot of hype surrounding this film, and believing all of it will leave you disappointed. It’s far from perfect. The characters aren’t always likeable, and at times, it can feel a tad pretentious. However, the performances are strong, capturing interest where the script starts to wane. If you clear your head, you’ll find a touching story of human ageing, particularly the effects it has on our world-view. It doesn’t quite live-up to media expectations, but then again, what could?