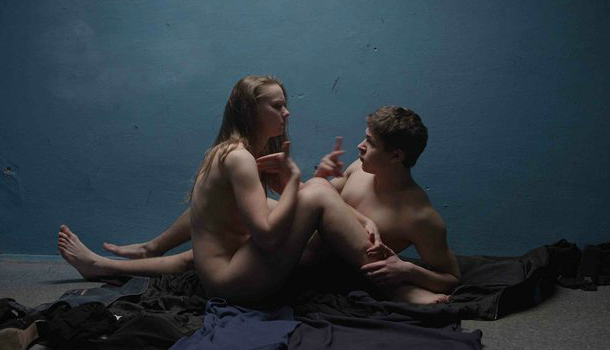 What separates humanity from animals? Can we even lay claim to such a distinction? These issues, and more, are discussed in Myroslav Slaboshpytskiy’s The Tribe. With a narrative both slow-burning and bleak, it’s not for the faint-hearted, but persevere, and the payoff is extraordinary. Towards the end, every moment carries emotional heft. In a world populated by superheroes, not knowing who will live and who will die is a breath of fresh air. For anyone interested in alternative cinema, The Tribe is a no-brainer.

All of the characters have names, but you’re unlikely to remember them. This has nothing to do with their personalities. Instead, it’s because the whole cast communicates via Ukrainian sign language. The opening scene shows the arrival of a young boy, Serhiy (Hryhoriy Fesenko), at a boarding school for the deaf. He is quickly enrolled into an institutionalised crime-circle, run by students and teachers alike. Activities include robbery, prostitution and assault. As the film progresses, this once-shy boy moves higher up the criminal hierarchy. The transformation is difficult to watch, but gripping, and will keep you hooked throughout.

The Tribe is a film about deaf people, but not exclusively for them. Most viewers won’t be able to understand the sign language, but this doesn’t mean they won’t interpret its meaning. Facial expressions and gestures convey much of the characters’ emotions. Angry, agitated, upset – they are all easily understood. The absence of dialogue gives a universal quality, which lends itself to overarching ubiquitous themes of love, hatred and more.

What does it mean to be human? Serhiy doesn’t hesitate to fight with fellow students to gain their respect. During an ‘initiation’, he wards off multiple assailants, watched by an eager crowd. Whilst somewhat choreographed, the effect is profound. What purpose does this violence serve? Why should spectators take pleasure in it? There was nothing unusual about Serhiy before entering the school. Is it the need to conform which has driven him to this? Or perhaps, more unnervingly, a basic instinct within us all?

Such questions permeate its 132-minute runtime. When you factor in graphic sex, the entirety of human existence boils down to a few basic instincts. The message is clear. Whilst we attempt modernised sophistication, society is nothing more than an enlarged tribe, much like the criminal community depicted on screen. This is emphasised by the effects of sign language. Without talk or music, the film occurs in near-silence. In a world that is increasingly loud, this is somewhat unsettling. It positions the audience as outsiders, detachedly observing a different way of life. 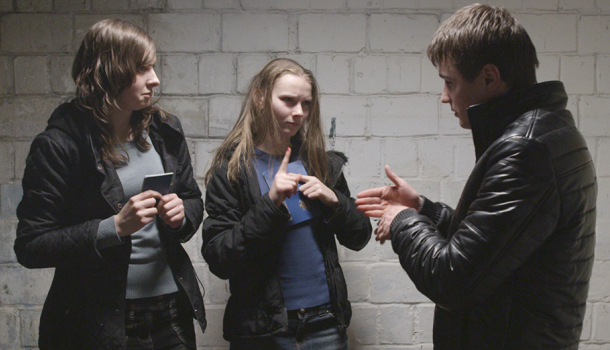 When a film tackles difficult issues, something must be said as to how they are handled. Prostitution and sexual violence are both present. Slaboshpytskiy doesn’t hide anything. Events occur in plain sight, so the victim’s pain is clearly visible. In doing so, the poor treatment of women highlights its injustice. This leads to a heartbreaking performance by Yana Novikova, who completely sells the horrors of abortion. This is the one scene where the film’s silence is temporarily broken, with haunting results.

For anyone interested in alternative cinema, The Tribe is a no-brainer

Slaboshpytskly takes a simple premise, and elevates it to near-universal appeal. Without need for dialogue or music, it’s the most basic form of storytelling. We’re so used to soundtracks telling us how to feel, that the abscence of one in The Tribe is somewhat daunting, and takes some getting used to. For those brave enough to stick with it, the rewards are plentiful. It’s a chilling exploration of the human psyche, which will stick with you long after you’ve left the cinema.