Watch This If…You’re About to Graduate 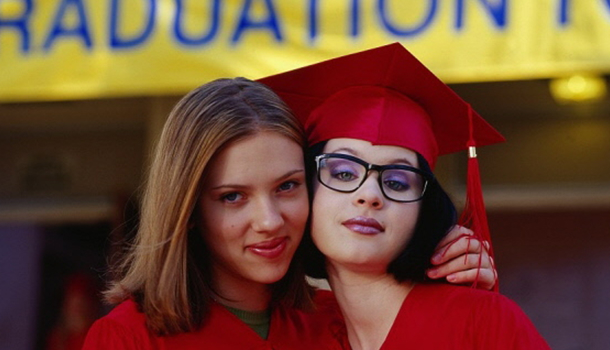 It’s about that time of the academic year. Exams are over, results are imminent, and for many students, a departure from university is on the cards, with some unsure of what their next move is. The process of graduating, both in a literal and transitional sense, can easily evoke a feeling of liminality, of being in between place and time as one awaits the future while wanting to remain in the present. Seem familiar? Then what better film to watch and relate to other than 2001’s Ghost World…

Terry Zwigoff’s adaptation of Daniel Clowes’ comic book of the same name, Ghost World tells the story of best friends Enid (Thora Birch) and Rebecca (Scarlett Johansson), two cynical high school graduates living in an unnamed American city. Following their graduation near the film’s opening, the two spend their days asserting their phantom authority over others by mocking folks in diners and stalking people, all the while promising to search for a place to live together.

Enid’s lack of maturation as the film progresses clashes unavoidably with Rebecca’s more proactive attitude in post-high school life, evident in Johansson’s reduced amount of screen time as their relationship distances, resulting in an alienated Enid having only her stalk victim Seymour (Steve Buscemi) left to connect with. Thematically, Ghost World deals with this issue very maturely, as the often unlikable Enid can be pitied for her actions due to the level of liminal lament buried within her deadpan posture.

Ghost World is a fitting film to resonate with impending graduates

Resting uncomfortably beneath Enid’s sardonic exterior is a saddened ex-student struggling to cope with change. At the graduation dance, Enid announces to Rebecca her unnerving disappointment at never seeing her classmate Dennis again. Presumably, Dennis is someone neither has had a close relationship with, and yet the thought of not seeing him bothers, even depresses Enid. This scene encapsulates the transitional condition Clowes’ protagonist finds herself in, in being unable to accept shifting circumstances while Rebecca is quickly able to move on, the latter finding and maintaining steady jobs and committing to finding a new home very readily, leaving Enid in quarter-life limbo. 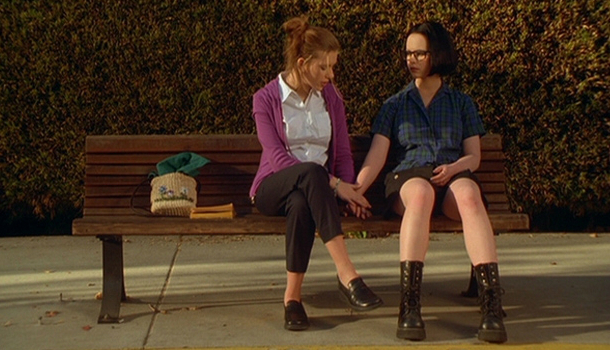 Zwigoff’s work is quirky, funny and feels very real despite being an adapted work of fiction. Thora Birch’s vulnerable yet stern performance brings a somewhat obnoxious character into a realm of relatability because of her capacity to sometimes subtly showcase Enid’s true feelings of anxiety and uncertainty despite her ludicrous actions which mask her as a confident individual, a facade she gradually labours to keep up as the reality of the real world is realised.

Ghost World is a fitting film to resonate with impending graduates, particularly those sharing Enid’s unease at the sudden prospects of such a milestone. To use her as an inverted role model, rejecting change won’t help the possibly challenging process and feelings that go along with graduating, but embracing it might. A delightfully made movie with well-formed characters, scenarios and conversations, Ghost World is a film that reaches out to anyone wandering in between life events, and it thus deserves a hand in return.